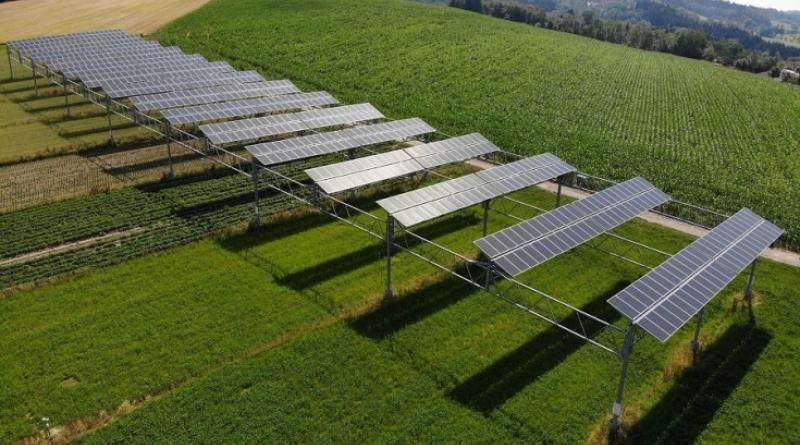 The dual use of land for the harvesting of solar electricity and agriculture is economical and has an enormous potential for arid climate zones. This is the result of a pilot project in Germany.

“Agrophotovoltaics – Resource Efficient Land Use (APV-RESOLA).” On one-third of a hectare arable land near Lake Constance in Germany, photovoltaic modules with a total power output of 194 kilowatt are installed on a five meter high structure. The results from 2017 showed a land use efficiency of 160 percent, as confirmed by the project consortium under the direction of the Fraunhofer Institute for Solar Energy Systems ISE. The performance of the agrophotovoltaic system in the very hot summer of 2018 greatly exceeded this value. The partial shading underneath the photovoltaic modules improved the agricultural yield, and the sun-rich summer increased the solar electricity production.

In 2018, the farmers of Heggelbach, a Demeter farm community, successfully brought in their second annual harvest from the agrophotovoltaic system. Four types of crops were grown: winter wheat, potatoes, clover and celery. In 2018, the yields from three of the four crops grown under the agrophotovoltaic system were greater than the reference yield. The crop yields for celery profited the most by the system, with a gain of 12 percent compared to the reference. Winter wheat produced a gain of plus 3 percent and clover a minus of 8 percent. “Based on the 2018 potato yield, the land use efficiency rose to 186 percent per hectare with the agrophotovoltaic system,” says Stephan Schindele of Fraunhofer ISE.

Aside from the portfolio development, crop yield and quality, scientists of the University of Hohenheim collected data on the climatic conditions underneath the APV system and also from the neighboring reference field. The solar irradiation underneath the APV system was about 30 percent less than the reference field. In addition to the amount of solar irradiation, the APV system affects the distribution of precipitation and the soil temperature. In spring and summer, the soil temperature under the APV system was less than on the reference field; the air temperature was identical. In the hot, dry summer of 2018, the soil moisture in the wheat crop was higher than the reference field, while in the winter months, it was less, as for the other crops. “We can assume that the shade under the semi-transparent solar modules enabled the plants to better endure the hot and dry conditions of 2018,” says the agricultural scientist Andrea Ehmann. “This result shows the potential for APV in arid regions, but also the necessity to carry out further trials in other climate regions and with other types of crops,” adds her colleague Axel Weselek.

In 2018, the solar irradiation totaled 1319.7 kilowatt hours per square meter, an increase of 8.4 percent compared to the previous year. The energy output of the APV array rose by two percent to 249,857 kWh, corresponding to an extraordinary good specific yield value of 1285.3 kWh/kWp. The electricity production costs of an APV system is today competitive with a small PV rooftop system. Researchers anticipate further cost reductions due to economies of scale and learning effects.

If the electricity is stored and used on site, as at the farm community Heggelbach, additional sources of income arise due to synergy effects. For one, the use of electric vehicles in agriculture is a rising. Two years ago, the agricultural machinery manufacturers Fendt and John Deere introduced the first fully battery-electric operated tractors. “When politics allow, agrophotovoltaics can provide the answer to the “food or fuel” debate. From the technical point of view, farmers can harvest both. Through the dual use of arable land, the main task of food production is met. The additional solar electricity production contributes to the expansion of electric mobility and serves to protect the climate,” says Stephan Schindele of Fraunhofer ISE.

The results from the summer of 2018 demonstrate the enormous potential of agrophotovoltaics for arid climate zones. Crops and livestock can benefit from the shade given by the PV modules. Fraunhofer ISE is already working on several projects to transfer the technology to threshold and developing countries as well as for new applications. A pilot study that Fraunhofer ISE carried out for the Indian state of Maharashtra showed that shading effects and less evaporation result in up to 40 percent higher yields for tomatoes and cotton crops. “In certain cases, we calculate nearly double the land use efficiency for the region,” says Max Trommsdorff of

Fraunhofer ISE, project leader of the study. In a project within the EU Program Horizon 2020, the Fraunhofer researchers are working together with partners from Algeria to test the effects of APV systems on the water balance. Besides less evaporation and lower temperatures, harvesting the rain water with PV modules also plays a role.

The APV-RESOLA project was financed by the German Federal Ministry of Education and Research and FONA (Research for Sustainable Development). The partners of the joint project are: Fraunhofer ISE, BayWa r.e. Solar Projects GmbH, Electrizitätswerke Schönau, Demeter farm cooperative Heggelbach, Karlsruhe Institute of Technology, Regional Association of Bodensee-Upper Swabia, and the University of Hohenheim. (HCN)