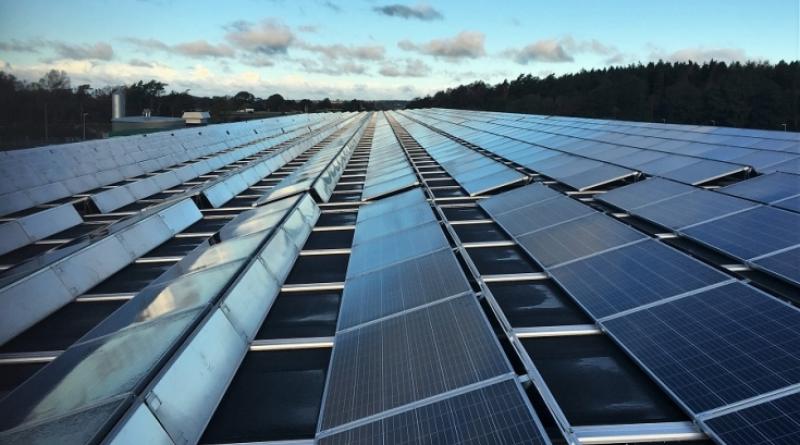 Solkompaniet, Swedish premium partner of the German IBC Solar, has planned and installed a self-consumption photovoltaic (PV) system for the prefabricated house manufacturer Derome Plusshus. With the new PV system, Derome is taking an important step towards becoming a climate-neutral company.

The new Derome Plusshus factory in Varberg on the Swedish west coast was built with the aim of producing climate-neutral prefabricated houses. Around half of the electricity required for production is produced by the building itself: On the roof, around 2,200 photovoltaic modules with a total capacity of 607 kW catch the sun on an area of 6,000 square metres. The plant is the largest in Western Sweden to date.

Derome's corporate philosophy is to work as environmentally and climate-friendly as possible. "It feels right to invest in solar energy and other renewable sources," says Henrik Svahn, project manager for the construction of the Derome plant. "We build our houses with environmentally friendly materials such as wood and we are proud that we have also found a climate-friendly alternative for the electricity supply with solar energy.” In addition to the solar electricity the factory also uses energy from wind and water power.

For the planning, design and construction of the PV system, Derome turned to the experts of Solkompaniet, the Swedish premium partner of IBC Solar. In addition to the solar modules, IBC Solar also supplied the IBC AeroFix mounting system. This substructure is particularly important because it has three decisive advantages. Firstly, it is aerodynamically designed. This means that the modules lie securely on the roof even in case of heavy wind loads. Secondly, the aerodynamic optimisation requires very little additional ballast. Especially in winter, with snow loads on the roof and the modules, this is important for static reasons. Thirdly, IBC AeroFix is not screwed to the roof. The roof skin is not damaged, and water cannot penetrate it. (HCN)