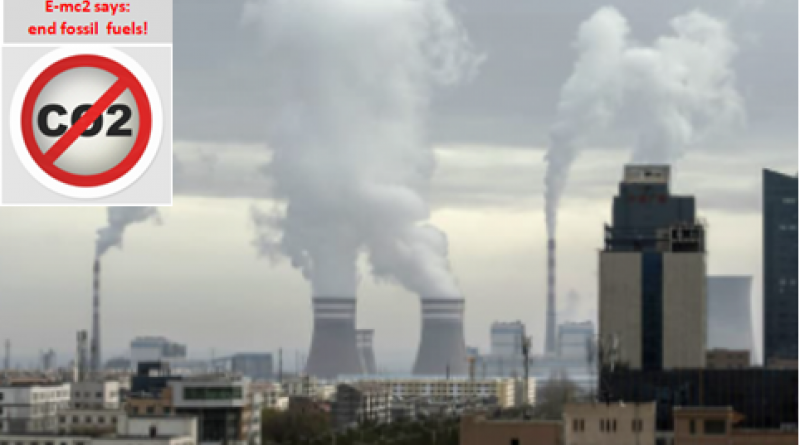 As finance shifts from coal, China is looking isolated as the last enabler of coal-fired power overseas.

A review of coal power proposals in countries with large remaining project pipelines indicates that 56% of the total capacity of these proposals is being supported by China.

Historically just one of the major providers of finance to overseas coal power projects, China has more recently looked increasingly isolated as other nations and financial institutions continue to withdraw from coal.

A recent study on coal finance found that China was the last remaining public financier for coal plants overseas. It also found that Chinese finance was involved in only 13% of coal-fired power capacity under development or operational outside of China over the 2013 to 2019 period.

An important point to make here is that this 13% punches way above its weight – Chinese public finance for coal has been key for de-risking many coal power projects, enabling them to crowd-in private finance that they would otherwise struggle to secure.

In addition, coal finance has changed significantly since the 2013 to 2019 period. Chinese, Japanese and Korean public finance for proposed new coal plants is under severe pressure following the pledges the three countries have already made to reach net zero emissions by mid-century.

A growing list of banks and major investors have distanced themselves from coal, with 178 globally significant financial institutions having announced formal coal exit policies to date. Momentum has accelerated, with 65 new or improved commitments announced in the first half of 2021, a 60% acceleration year-on-year. South Korea has pledged to end public finance for coal overseas. Japan has indicated that it will also stop although it now appears it is attempting to create and exploit loopholes in certain cases.

A look at the remaining global coal power project pipeline confirms that China still appears to be on course to be the key financial, engineering and construction enabler of the next generation of coal plants, should any of those projects proceed.

IEEFA previously analysed China’s influence on the coal power project pipeline back in 2018. The analysis found that China was effectively the lender of last resort for coal-fired power proposals in developing Asia and Africa, thanks to the de-risking nature of its public finance from China Development Bank and China EXIM Bank, and the willingness of its huge state-owned commercial banks to keep lending to coal.

Since 2018 the global pipeline of coal power projects has continued to shrink. However there are still substantial capacities of planned coal power projects in a number of countries although, given global momentum away from coal, there must be serious doubt over the likelihood that many of these proposals will proceed.

The below chart shows the ten largest pre-construction project pipelines outside of China and India (where coal power construction and financing is entirely domestic) as per the Global Energy Monitor Global Coal Plant Tracker database. 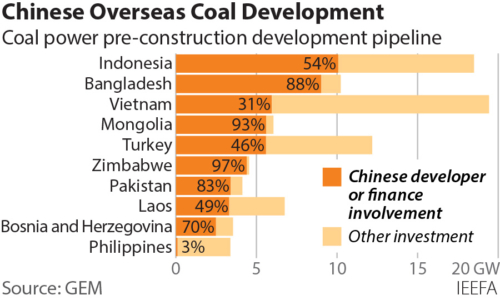 The chart shows the percentage of each country’s coal power pipeline capacity that has some Chinese support. Overall, 56% of the total capacity of the combined pipelines across the ten countries is being supported by China.

Indonesia has the largest pipeline with Chinese backing at more than 10 gigawatts (GW) or 54% of the nation’s pipeline. In Bangladesh, Chinese support is present in 88% of the remaining coal power pipeline although – as with Indonesia – there must be serious doubt about how much of this will proceed following the Bangladesh government’s recent cancellation of 10 coal-fired power proposals.

These cancellations had been rumoured for many months and there is indication that China was seriously reviewing its stance on coal in Bangladesh before the official announcement – a leaked letter from the Chinese embassy in Bangladesh stated that China was no longer interested in coal power development in the country. However, there has been no official Chinese withdrawal from Bangladesh coal plant development.

Vietnam has the third highest Chinese support by capacity but one of the lowest in percentage terms. However, this is not due to any significant presence of other coal-supporting nations in Vietnam’s pre-construction pipeline. Rather, this is because a high proportion of the pipeline has been significantly delayed as Vietnam failed to find sponsors or financing for the projects. Hence, a large proportion of Vietnam’s pre-construction projects appear to have no finance, developer or engineering sources attached and should be considered increasingly doubtful.

Turkey also has a high proportion of projects with no apparent finance or engineering agreement. As it stands, China is the most likely source as the world’s coal financier and engineer of last resort, if those proposals have any chance of proceeding.

In other countries, GEM’s data suggests that the coal project pipeline continues to be almost entirely supported by China.

Zimbabwe’s pipeline is led by RioZim’s 2,800 megawatt (MW) Sengwa coal power project with China Gezhouba on board to construct the plant, and finance from the Industrial and Commercial Bank of China (ICBC) and Sinosure. It has since been reported that ICBC has pulled out of the project possibly indicating a sign of things to come for China’s commercial banks in the wake of ICBC also withdrawing from Kenya’s controversial Lamu coal power project.

It is no surprise that Pakistan is highly reliant on support from China for its planned coal plants given the high priority the China-Pakistan Economic Corridor (CPEC) – a key pillar of China’s Belt and Road Initiative – is given by both countries. Several coal power plants constructed and financed by China are already operational in Pakistan with more planned or already under construction.

Due to the generous power purchase agreements obtained by the operational plants, and Pakistan’s power overcapacity problem, these plants are contributing to the growing financial crisis within Pakistan’s power system. The coal plants receive generous capacity payments, raising the cost of electricity and worsening power system debt which has reached US$16 billion and is rising fast.

The unaffordable nature of surplus coal-fired power built under CPEC has led the Pakistan government to seek debt relief from China.

As other sources of coal finance dry up, it is clear that remaining coal power projects are increasingly reliant on China as a source of finance, investment and engineering support if they are to have any chance of proceeding.

Meanwhile, China has stated that it intends to reach peak domestic coal consumption by 2025 as it seeks to decarbonise its economy.

If China’s stance on overseas power development is not to be increasingly out of step with its domestic energy policy, official statements on the ending of overseas coal power development need to be matched by more changes on the ground in developing Asia and Africa.

China’s digital currency could be the future of money – but does it threaten global stability?