What Is the Environmental Cost of Bottled Water? 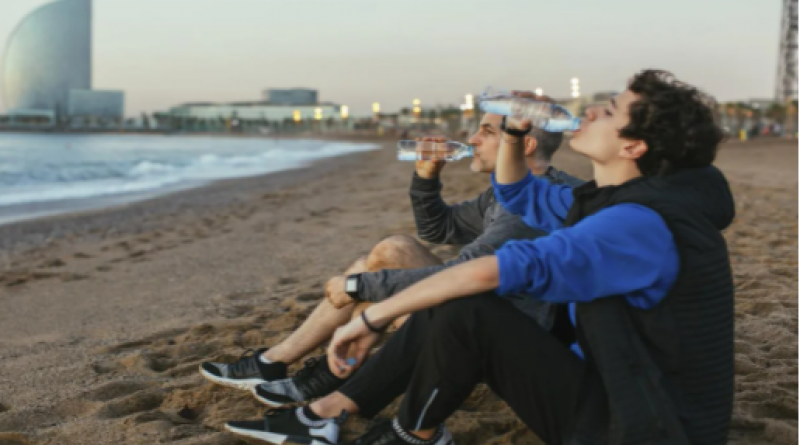 Is it better for your health and the environment to drink water from a plastic bottle or from a tap?

A recent study published in Science of the Total Environment has the answer for this question, at least in the Spanish city of Barcelona. It found that the environmental toll of bottled water was 1,400 to 3,500 times higher than that of tap water, while drinking only tap water would only take an average of two hours off a resident's life.

A Tale of Two Assessments

The study is notable for being the "first attempt" to integrate two kinds of assessment for evaluating the health and environmental impacts of drinking water choices, study co-author and postdoctoral research at the Technical University of Catalonia Marianna Garfi told EcoWatch in an email.

The first is a health impact assessment (HIA).

"HIA provides a framework and procedure for estimating the impact of an intervention on a selected environmental health issue for a defined population," Garfi explained.

In this case, the researchers considered the risk of exposure to trihalomethane (THM), a by-product of the water disinfection process that is present in tap water and has been linked to bladder cancer. They then calculated years of life lost, years lived with disability and disability adjusted life years based on this exposure.

The second assessment is a life cycle assessment (LCA), which identifies the environmental impacts of a product from manufacture to disposal. In this case, the researchers focused on materials and energy used and waste generated.

They then used these assessments to consider the health and environmental impacts of four scenarios:

The researchers focused on Barcelona because they were based there and had the data available. It also has THM levels and bottled-water consumption habits that are similar to those of other countries in Europe, which makes it a useful point of comparison.

The results indicate that bottled water is much worse for the planet than tap water. As of 2016, bottled water was the primary source of drinking water for 60 percent of Barcelona's population. The current state of affairs costs the planet around $50 million in resource extraction and 0.852 species a year. If everyone in Barcelona were to shift to bottled water, these costs would jump to $83.9 million and 1.43 species per year. However, in the scenario in which everyone drank only tap water or filtered tap water, the environmental costs were negligible. When compared to the all tap-water scenario, the all-bottled water scenario had 1,400 times more impact on ecosystems and cost 3,500 times more in terms of resource extraction.

The all-bottled water scenario did have a slight advantage for the health of Barcelona residents only. Currently, about 93.9 years of life across the city are lost due to tap water consumption. In the all-tap water scenario, this would jump to 309 years total, which equates to two hours of life lost per person. It would fall to 35.6 years lost if the city switched exclusively to filtered water and even further to 2.2 years lost if everyone drank bottled water.

However, the health outlook changed when the researchers considered how bottled-water production would affect people living outside Barcelona.

"The production of bottled water to meet the drinking water needs of [the] Barcelona population was estimated to result in 625 DALYs (disability-adjusted life years) per year in the global population," the study authors wrote. "This burden would be reduced to 0.5 DALYs if only tap water, or filtered tap water were consumed."

The reason that bottled water is so costly for the environment, Garfi said, came down to the making of the bottles themselves.

"Indeed, raw materials and energy required for bottle manufacturing accounted for the majority of the impact of bottled water use," she said. It was responsible for as much as 90 percent of the bottles' impact.

While this particular study found less impacts in terms of plastic waste, Barcelona's drinking habits are already harming its beaches and coastline. César Sánchez, communications director of recycling organization Retoma told EcoWatch in an email. He said that plastic bottles of all types accounted for 80 percent of the volume and 35 percent of the weight of litter gathered from the city's beaches. Farther out to sea, there are as many as nine million bits of waste floating per every square kilometer along the coast.

"Beyond that, in my personal experience sailing with fishermen of the area, I have had the chance of corroborat[ing] this situation," he said. "They say they already live in 2050 because they are getting more waste than fish out of the sea right now."

Both Sánchez and Garfi argued that the city of Barcelona should take steps to promote tap water over bottled water.

Individual consumers also have a role to play, Garfi said.

"Be aware of the impacts caused by the use of bottled water and try to find another solution," she advised, such as using a home filter to improve the taste of tap water.

"In all countries with deposit and return systems in Europe, more than 90% of beverage containers are reused or recycled, so it is the most effective tool to end... the littering problem," he said.

Environmental impact of bottled water ‘up to 3,500 times greater than tap water’

Do you drink bottled water? Read this.