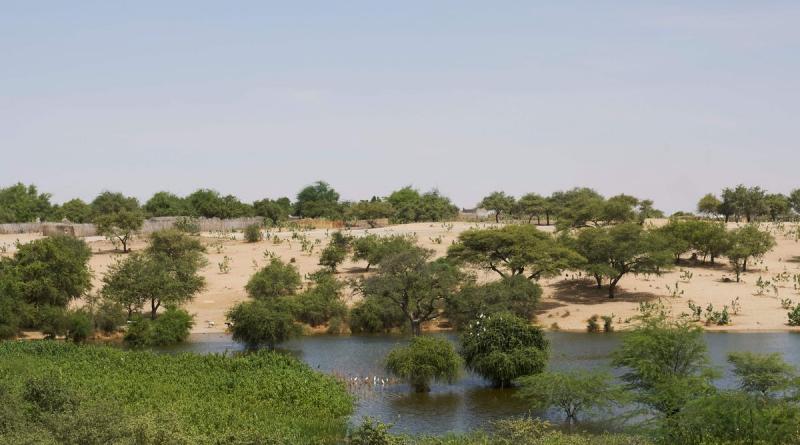 Lake Chad is an extremely shallow water body in the Sahel. It was once the world’s sixth largest inland water body with an open water area of 25,000 km2 in the 1960s, it shrunk dramatically at the beginning of the 1970s and reduced to less than 2,000 km2 during the 1980s, decreasing by more than 90% its area. It is one of the largest lakes in Africa. It is an endorheic lake – meaning that it doesn’t drain towards the ocean.

Its origin is unknown but it is believed to be a remnant of a former inland sea. It doesn’t drain into the ocean but it has shrunk by over 90% since the 1960s due to climate change, an increase in the population and unplanned irrigation. Given the rate at which the lake is disappearing, in less than a decade it may cease to be.

Four countries share borders within the water body – Nigeria, Chad, Niger and Cameroon – and have formed a political union, the Lake Chad Basin Countries. Other countries indirectly connected to the lake are Algeria, Libya, Central African Republic and Sudan. Over 30 million people live around the lake.

For them, it’s a source of freshwater for drinking, sanitation and irrigation. It supports the livelihoods of farmers, pastoralists, hunters and fishermen.

The Lake Chad region, however, is one of the most unstable in the world. According to the 2020 Global Terrorism Index report, countries of the region are among the 10 least peaceful countries in Africa.

Our research focused on how the drying of this important water body contributes to the instability in the region.

The study found that loss of livelihoods has promoted criminality, easy recruitment by terrorist groups, and migration to urban centres. This has also led to violence and crime in cities and towns. Management of the shrinking lake has caused conflicts among the states that depend on it and this has made it more difficult for them to collectively fight insecurity in the region. The lake is central to regional stability. To achieve peace, countries should focus on reviving the water body rather than on military activities.

The immediate impact of the drying of Lake Chad is loss of livelihoods.

One of the respondents said in an interview that:

Many years back, this water used to be what we depend on for farming, fishing and herding. Since the water has dried up, sustaining our livelihoods has become so hard. We can hardly farm now and we record regular death of our livestock because of lack of fodder and water to fatten them. Because of this, most people have abandoned farming, fishing and livestock rearing because they are no longer sustainable in this area.

Loss of the traditional means of livelihood leads to widespread poverty and food insecurity. A 2017 report estimated there were about 10.7 million inhabitants of Lake Chad Region in need of humanitarian services.

Reports have pointed to rising incidence of cattle rustling in the region. It’s easy to move cattle over the country borders in the area to evade arrest. Contemporary rustling has been associated with Boko Haram who resort to cattle rustling as additional means of raising fund in support of their operations. Boko Haram has become a serious security problem in the Lake Chad region.

Most of the response to the threat of the group has been military. For example, from 2009 to 2018, Nigeria’s defence budget totalled nearly $21 billion with a substantial part going towards the fight against Boko Haram.

Further, Boko Haram has capitalised on the loss of livelihoods and economic woes to recruit people into its ranks. It either appeals to the poor ideologically or directly uses economic incentives.

Interviews with respondents also revealed that the drying out of the lake has intensified long-distance migration of people and livestock to cities and towns of the basin’s countries.

As the lake has shrunk, the water has shifted towards Chad and Cameroon while the Nigerian and Nigerien sides have dried up. This forces people to cross national borders to reach the shoreline. Respect for boundaries disappears. A complex web of social, economic, environmental, and political issues spills into interstate conflicts. This conflict relationship caused by access to and management of the lake has seriously affected the collective effort of the region’s states to fight Boko Haram.

The Lake Chad Basin Commission has identified the need to replenish the water body. There was a plan to build a dam and canals to pump water from the Congo River to the Chari River, Central African Republic and then on to Lake Chad. It was first mooted in 1982 by the Italian engineering company Bonifica Spa, and discussed at the International Conference on Lake Chad in Abuja in 2018. Major challenges to this plan include funding, resistance from environmental campaigners and peaceful conditions in which to carry it out.

Unfortunately, this scheme is yet to see the light of the day. The commission’s member states lack the commitment required to take action, probably due to the conflict relationship between the other Lake Chad countries and Nigeria.

Yet if they want stability in the region, the key is to replenish the lake.