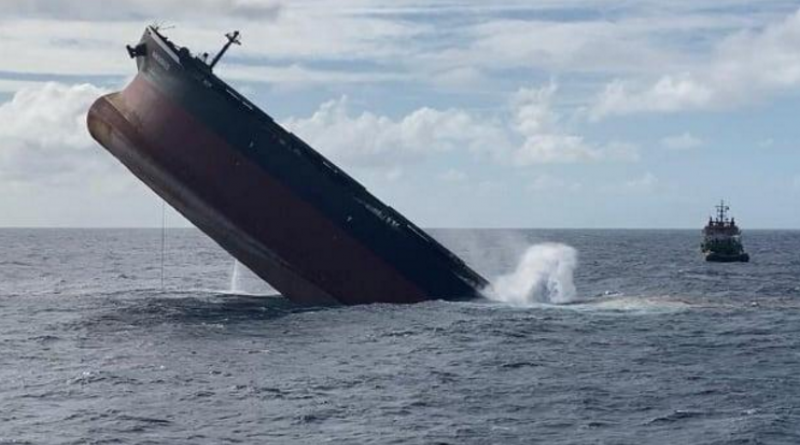 TOKYO  - Japan’s Nagashiki Shipping, which owns the bulk carrier that ran aground on a reef in Mauritius and caused a large oil spill, said on Tuesday it has completed scuttling of the front part of the vessel on Monday as instructed by local authorities.

The shipping company will continue planning with local authorities and specialists on the removal of the remaining part of the carrier from the reef, it said in a statement.

Mauritius said last week it would scuttle the ship’s remains at sea in a way that would avoid further pollution or interfere with maritime routes, after taking in recommendations from various groups on how and where to sink the ship to conform with advice of French experts present on the island.

Nagashiki said it has submerged the carrier in water designated by the local authorities.

The MV Wakashio had about 3,800 tonnes of heavy oil and about 200 tonnes of light oil as fuel as of July 25 when it ran aground.

Except for about 1,000 tons of oil that had spilled overboard almost all of the remaining oil on the ship was retrieved by August 12, and almost all lubricant and residues, which remained onboard, collected by August 23, the firm said.

The company will continue to collect oil deposits on board and suspended matter while local authorities, people and an oil spill cleaning company are continuing to collect oil that has drifted to the coast, it said.

The carrier struck a coral reef off the Indian Ocean island on July 25 and began spilling oil on Aug. 6, prompting the government to announce a state of environmental emergency.

The spill spread over a vast area of endangered corals, affecting fish and other marine life in what some scientists have called the country’s worst ecological disaster.

The ship broke apart on Aug 15.