'It's as if we've learned nothing': alarm over Amazon road project. 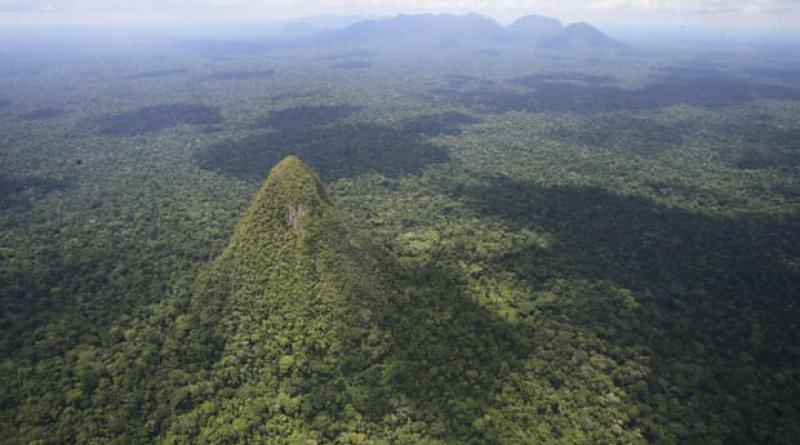 Brazilian activists have voiced alarm over their government’s plans to bulldoze a 94-mile highway through a biodiverse corner of the Amazon along the border with Peru that is home to at least three indigenous communities.

The planned road is an extension of the BR-364, a 2,700-mile highway that links São Paulo with the Amazon state of Acre, and would connect the town of Cruzeiro do Sul with the Peruvian border town of Pucallpa.

Backers of the “transoceanic” project, who include Brazil’s president, Jair Bolsonaro, argue it will boost the economy of this remote region by creating a transport hub through which agricultural products can be shipped to Pacific ports in Peru and on to China.

“This project won’t destroy the forest, it will bring sustainable development to the region by heating up commercial and cultural relations [with Peru],” said Mara Rocha, a centre-right congresswoman from Acre who supports the idea. 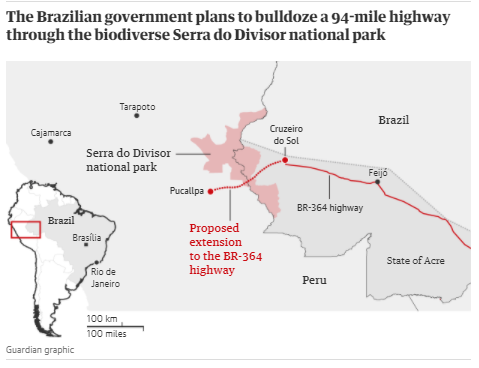 Rocha said the project was critical to a region that felt “forgotten and invisible to the rest of the country”. Opponents, however, fear it could have catastrophic consequences for Brazil’s environment, which is already reeling under Bolsonaro as the rate of Amazon deforestation soars to its highest level in more than a decade.

A report in the Estado de São Paulo newspaper said an 80-mile (130km) stretch of pristine forest would need to be felled to build the road, which would cut through the centre of the protected Serra do Divisor national park. Experts call the park one of the Amazon’s most biodiverse regions, hosting at least 130 species of mammal and more than 400 species of bird. Brazilian lawmakers are considering plans to water down its protections in an apparent attempt to accelerate the road’s construction.

Luís Puwe Puyanawa, a local indigenous leader who opposes the project, said: “The truth is that nobody in Acre needs this transoceanic route – there’s already a road linking us to Peru. What we need is to leave the forest standing.”

Miguel Scarcello, the head of SOS Amazônia, an environmental group based in the state capital, Rio Branco, described the project as “irresponsible” and a throwback to Brazil’s military dictatorship when roads where bulldozed through the Amazon in an attempt to populate and develop the region.

“It’s such an old-fashioned, backwards vision … that pays absolutely no attention to conservation. It will cut through an untouched area of forest and affect the headwaters of really important tributaries of the Juruá River,” Scarcello said.

He described how during the 1964-85 dictatorship such roads “decimated” indigenous communities and inflicted “immense destruction” on the rainforest, as loggers used them to access previously inaccessible areas. “We’re not in the 1960s any more,” Scarcello said. “It’s as if we’ve learned nothing from the effects that this could cause and how much destruction could be caused.”

He added: “They say it will bring development but, as always, it will be development for half a dozen people,” and he warned of a “carnival of land grabbing” that would accompany the planned road.

If the project is approved, three indigenous communities near the road will reportedly be affected: Nukini, Jaminawa and Poyanawa. Scarcello said it was possible the national park was also home to isolated tribes with whom contact had not been made.

Puyanawa, 41, said he feared his community would be worst hit. “The road is expected to pass within about a kilometre of our lands. One of my biggest concerns is that this stretch is home to some of the most important water sources of the Amazon basin. The Alto Juruá provides all the waters that flow into the Rio Solimões and then Rio Negro, until they reach the sea,” he said. “All of these rivers could be really affected and this could cause the disappearance of important headwaters in the Amazon. With that, many species could disappear.”

Puyanawa said plans for such a route had been touted by politicians for decades but appeared to have accelerated since Bolsonaro took office in January 2019. “Nobody has wanted it as much as Bolsonaro,” he said.

That increase has been blamed on the feeling of impunity that Bolsonaro’s presidency has brought illegal loggers, cattle ranchers and miners seeking to cash in. “They feel completely at ease,” said Carlos Rittl, a Brazilian environmentalist who works at the Institute for Advanced Sustainability Studies in Germany. “We are being governed by people whose motto for the environment is: destruction.”

The BR-364 extension, which Bolsonaro has publicly backed as a means to give Brazil “a passage to the Pacific”, is not the only Amazon road project worrying environmentalists and climate campaigners.

Last week his administration said it would begin repaving the BR-319, a decaying dictatorship-era highway that cuts north to south through the Amazon from Manaus to Porto Velho. “A historic day for the north!” Bolsonaro wrote on Facebook, announcing the news.

But in a recent essay, Prof Philip Fearnside, an ecologist at Brazil’s National Institute for Amazonian Research, said reviving the BR-319, which has been abandoned since late 1980s, “would give deforesters access to about half of what remains of the country’s Amazon forest” and was “certainly among the most consequential decisions facing Brazil today”.