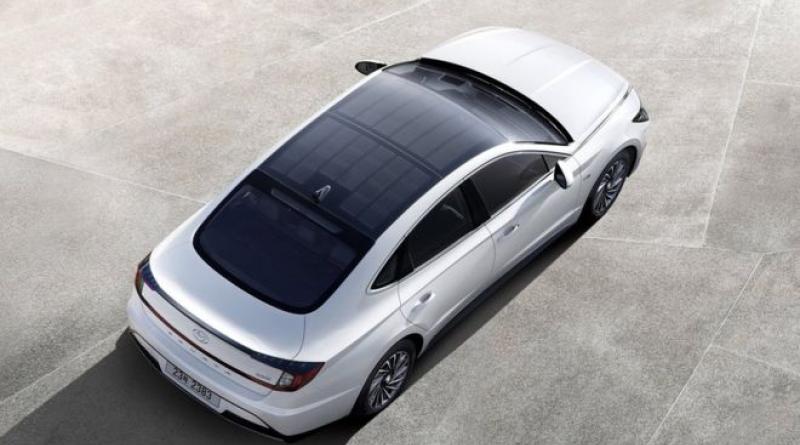 Hyundai has released a version of its Sonata hybrid that has solar panels to help charge its battery.

The Korean car maker said up to 60% of the power for the car's battery could be supplied if the solar roof was used for six hours a day.

The panels would provide enough power to propel the Sonata for 1,300km (800miles) a year, it added.

Hyundai said it planned to offer the roof as an optional extra on other models in its range.

It added that the mid-sized passenger car had an improved engine control system to ensure energy use was as efficient as possible.

Writing on the Digital Trends news site Stephen Edelstein said: "Hybrids like the Sonata have smaller battery packs than all-electric cars, so a solar roof can make a bigger difference in charging.

"Solar cells add cost and weight to cars, and it's unclear how effective they can be in the real world."

Hyundai is working on a second-generation solar roof that would be semi-transparent to help light the car's cabin.

The solar-roof equipped Sonata will be on sale in North America and Korea. Hyundai said it had no plans to sell it in other regions.

No price for the hybrid passenger car equipped with a solar roof has been given by Hyundai.

In the UK sales of low emission vehicles, including hybrids, fell for the first time in more than two years, according to figures from the Society of Motor Manufacturers and Traders (SMMT), released last month.

The SMMT blamed confusing policies and "premature" removal of subsidies for such hybrids, as factors in the drop of sales.

Hyundai is not the first car manufacturer to use solar panels on a vehicle. The sun-powered charging systems are available as an option on the Toyota Prius, and the luxury Karma Revero is also available with one.

In addition, Dutch start-up Lightyear is working on an electric car that uses solar panels on its bonnet and roof to help charge the vehicle's batteries.