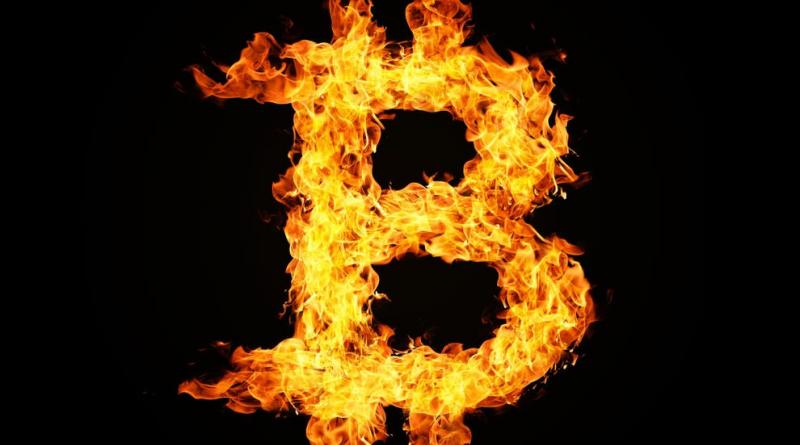 In little over a decade, bitcoin has risen from a fringe technology popular with cryptographers, to the world's ninth most valuable asset by market cap.

The cryptocurrency's dramatic ascent has created millionaires, reimagined money, and launched a multi-billion dollar industry inspired by its revolutionary decentralised technology. But it has also brought with it some unwanted side effects.

The computing power required to support bitcoin's underlying network now requires nearly as much energy as the entire country of Argentina, leading to criticism about its environmental footprint.

Analysis by the University of Cambridge suggests the bitcoin network uses more than 121 terawatt-hours (TWh) annually, which would rank it in the top 30 electricity consumers worldwide if it were a country.

Concerns about bitcoin's energy demands have been around since the very beginning, with crypto pioneer Hal Finney tweeting about potential future CO2 emissions on 27 January 2009 – just two weeks after receiving the first ever bitcoin transaction from the cryptocurrency's pseudonymous creator Satoshi Nakamoto.

The amount of energy bitcoin's network consumes did not rise to serious prominence until 2017, when a major price rally drastically pushed up its energy needs to the level of a small country. As the market cooled off in the years following, so did the energy demands, but the latest all-time high hit this week is more than double that of three and a half years ago. And this time its energy requirements are even greater.

"Bitcoin's energy consumption has more than quadrupled since the beginning of its last peak in 2017 and it is set to get worse because energy inefficiency is built into bitcoin's DNA," Charles Hoskinson, CEO of leading cryptography firm IOHK, tells The Independent.

"Bitcoin's carbon footprint will get exponentially worse because the more its price rises, the more competition there is for the currency and thus the more energy it consumes."

Bitcoin's environmental impact is exacerbated by the fact that a majority of miners are based in China, where over two thirds of power is from coal.

Bitcoin miners therefore gravitate to where electricity is cheapest, meaning the fundamental issue is not with bitcoin but with a lack of cheap renewable energy production. 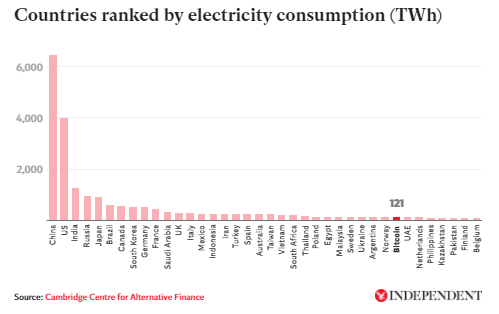 Fortunately, there are solutions being put in place, with some eco-friendly mining facilities already operating at a massive scale.

In Iceland and Norway, where nearly 100 per cent of all energy production is renewable, cryptocurrency miners are taking advantage of cheap hydro-electric and geothermal energy to power their machines. The low temperatures in the countries also help reduce costs by cooling the computer servers naturally.

Last year, the University of Cambridge's third Global Cryptoasset Benchmarking Study found that 76 per cent of cryptocurrency miners use electricity from renewable sources in their operations. This figure was up from 60 per cent from the same benchmarking study in 2018.

This trend is expected to continue, according to projections from the International Renewable Energy Agency, which reported last year that renewable energy sources are increasingly more cost-efficient than fossil fuels.

"In its current status, the infrastructure that supports the bitcoin protocol cannot be sustained, but the beauty of the protocol is that the incentive structure will force miners to adopt the cheapest form of electricity, which in the near future will be renewable energy," Don Wyper, COO of DigitalMint, tells The Independent.

"I think the latest University of Cambridge study is misguided, as bitcoin is acting as a 'digital gold' and therefore should be compared to the energy consumption of other store-of-value-assets... The gold mining industry consumes 475 million GigaJoules worth of electricity annually.

"And if bitcoin can become the digital currency it was initially envisioned, we'll need to consider all the electricity consumed via currency creation, destruction, transmittance, securitisation, loss, etc. I personally believe climate change is one of the most important issues in our world today, but people who say bitcoin will lead to even more environmental destruction don't understand that bitcoin is actually acting as an accelerant to helping our environment.”

Alternative cryptocurrencies have also sought to solve bitcoin's current environmental issues by altering the underpinning technology in order for it to require less power.

One of these is Cardano, which Hoskinson claims is 4 million times more energy efficient than bitcoin thanks to its 'Proof-of-Stake' blockchain that validates transactions based on how many coins are held by a network participant rather than the amount of computational processing power they possess.

"Cardano is being built to scale to meet the needs of global businesses and consumers, at higher volumes and faster speeds than existing global financial infrastructure – despite the entire global network using no more energy than a large family home," Hoskinson says.

If bitcoin's transition to renewable energy sources does not happen quickly, Hoskinson is among several experts who predict that investors and consumers will look to other cryptocurrencies that are less environmentally damaging.

"I believe the power of fear over climate change is far greater than the fear of missing out (FOMO) that drives this new wave of institutional and retail investment in bitcoin," Blockchain consultant Scott Morgan tells The Independent.

"Bitcoin can do incredible good in the world. It is a technological asset. [But] other cryptocurrencies use less energy."