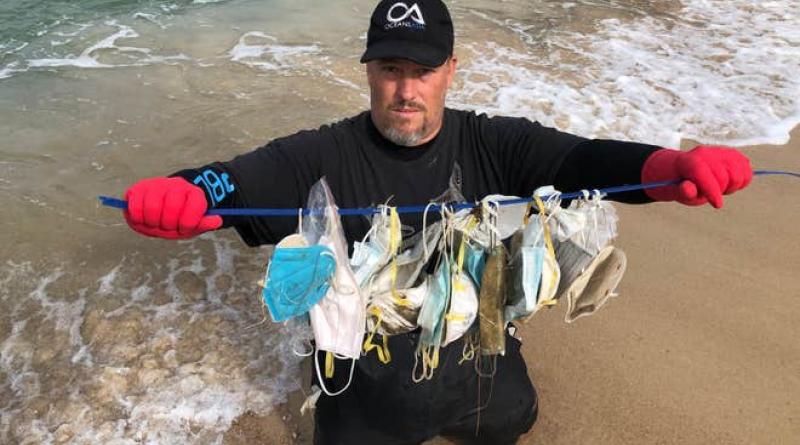 The bright colours of latex gloves risk can be mistaken as food by seabirds, turtles and other marine mammals putting them at risk of severe injuries and death.

The rise in disposable face masks and gloves being used to prevent the spread of coronavirus is adding to the glut of plastic pollution threatening the health of oceans and marine life, environmentalists warn.

On Wednesday, New York Governor Andrew Cuomo issued an executive order, effective this weekend, that New Yorkers must now wear a mask when out in public in situations where social distancing isn’t possible.

The CDC advises wearing cloth masks in public (although President Trump says it’s not mandatory and he "doesn't see it for himself") due to the concern that Covid-19 can be spread by people who are infected but not showing symptoms.

It has done little to stop a wave of single-use masks and latex gloves being used and discarded.

On social media, pictures of bright blue gloves and crumpled masks littering streets, shopping carts, parking lots, beaches and green spaces are being posted around the world. It’s left to sanitation workers and grocery story staff, those essential but underpaid frontline employees, to pick them up.

Those not picked up can be caught by a gust of wind or washed down drains, ending up in the ocean and waterways.

Not only is there a potential health risk of dropping used masks and gloves during the pandemic but many contain materials that do not recycle and are not biodegradable. Surgical masks are made using non-woven fabrics including plastics like polypropylene.

According to NOAA, plastic wreaks havoc on marine ecosystems. As plastic swirls around in the water, much of it breaks down to tiny pieces, called micro-plastics.

The Ocean Conservancy discovered that many fish species consume plastics debris, confusing it for real food and estimated that at least 600 different wildlife species are threatened by the pollution.

There is also a human health risk from plastic entering the food chain with nearly a billion people around the world consuming seafood as their primary source of protein.

Used masks and gloves add to an already significant problem: At least 8m tons of plastic end up in the oceans every year, making up 80 per cent of all marine debris, according to the International Union for Conservation of Nature.

The bright colours of latex gloves can be mistaken as food by seabirds, turtles and other marine mammals putting them at risk of severe injuries and death.

Last year a sperm whale, which died after becoming stranded on a beach on the Isle of Harris in Scotland, was found to have 220lb of debris in its stomach including bundles of rope, plastic gloves, bags and cups.

An early warning sign of the worrying trend came in February, when conservation group OceansAsia posted a photo of dozens of surgical masks they discovered on Hong Kong beaches during a year-long research project into marine debris and micro-plastics.

Co-founder Gary Stokes told The Independent: “The way I see these masks in the environment is just another addition to the ever-growing marine debris crisis our oceans are facing. No better, no worse, just shouldn’t be there in the first place. I’m waiting to hear of the first necropsy that finds masks inside a dead marine animal. It’s not a question of if, but when.”

Coronavirus masks are adding to Hong Kong’s marine trash problem which flows from mainland China and elsewhere. “People think they’re protecting themselves but it’s not just about protecting yourselves, you need to protect everybody and by not throwing away the mask properly, it’s very selfish,” Tracey Read, founder of the group Plastic Free Seas in Hong Kong told Reuters.

In the US, Maria Algarra, was so concerned about the uptick in plastic waste that she started a hashtag campaign on 23 March called #TheGloveChallenge, asking people to send photos as a way to track littered gloves and raise awareness of the issue. (She made clear that people should not pick up the items unless they feel it's safe and they have personal protective equipment).

Ms Algarra founded Clean This Beach Up in Miami, Florida last year. Before the pandemic, the movement had grown to 1,600 people, from high school students to octogenarians, volunteering to pick up trash on beaches across Miami-Dade and Broward counties.

She told The Independent that since the coronavirus outbreak, she had seen dozens of plastic gloves floating in the bay, in parking lots and on the Venetian Causeway bridges linking Miami Beach to the mainland.

As part of the campaign, Ms Algarra has been sent 1,200 pictures of jettisoned plastic gloves – not only in Miami but in the boroughs of New York City and in Italy, Spain, Germany and New Zealand. A rough count adds up to more than 1,800 gloves in these pictures alone.

Save Marine Life From Single-Use Plastics.

Pollutionwatch: why has particle pollution increased under lockdown?