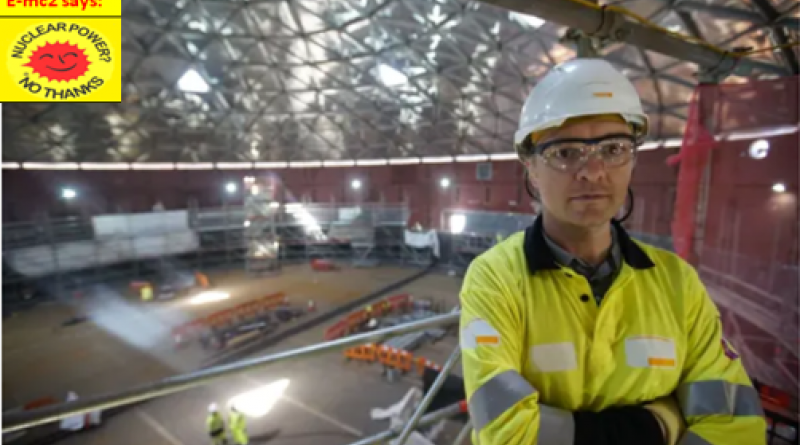 There’s a scene more dull than watching paint dry ... and yet somehow, this BBC documentary on a new nuclear reactor is a staggering, bravura-filled feat.

This programme was so boring. How boring? Let’s put it this way. It dealt with a 130-metre-long boring machine that is boring three boreholes under the Bristol Channel’s Jurassic bedrock. It’s a machine even more boring than the one boring through the Chilterns to make the rail journey to or from Birmingham less boring. As if that were possible. The machine is so boring it doesn’t have a name, though if there were a public vote it would be called Borey McBoreface.

First, we saw the boring machine arriving by barge then loaded on to trucks and driven under police escort through Somerset lanes. This sequence was so devoid of incident it resembled that four-hour BBC film of a sleigh ride across the tundra in real time. At least the tundra film had huskies. Director Mat Stimpson only had an answer to the question “Where did all the interchangeable male engineers in hi-vis gilets and hard hats go?” Actually that’s not fair: there was a female engineer, whom we saw checking that the ambient temperature didn’t rise too fast to make concrete set too quickly. Which wasn’t boring at all.

Then, improbably, something happened. A tractor blocked the convoy’s route. Could this tractor halt the £22bn project for a plant due to generate 3.2 gigawatts of power, supplying about 7% of total UK electricity? Could the tractor stop Hinkley Point C becoming operational in 2025? Was this in fact passive resistance by nuclear protesters otherwise minimally represented in this BBC Two documentary?

Sadly, the answer to all these questions was no. The farmer reversed into a lay-by. The driver waved his thanks and proceeded to his destination. Gosh, that was exciting.

Then we saw the boring machine in action. “This,” said an engineer, “is what we’ve been waiting for.” Speak for yourself. It must be tricky to film an underwater boring machine in action, so Stimpson cut to a graphic showing how pre-cast concrete panels are installed by automated paws (if that’s the right word) as the machine drills and rubble is pumped backwards through some internal tube (I’m no engineer).

This documentary, made in association with the Open University, was educational. I learned there is one thing more dull than watching paint dry, namely watching concrete being poured. And not just any old concrete, but 9,000 cubic metres of special concrete in a circle 56 metres in diameter and several metres deep. And not just any old pour but a non-stop pour lasting 70 hours, overseen by a man sipping from an “I heart concrete” mug. If there has ever been a more boring pouring, don’t feel as though you have to tell me about it.

The pour had a moment of jeopardy. Engineers worried the sun might dry the concrete too fast, causing cracking through which water might seep in. This, you’d think, would be disastrous for the reactors that are to be installed above this concrete foundation inside walls so tough that they can resist earthquakes, tsunamis, aircraft and, fingers crossed, Chernobyl part two. Happily, the pour ended without cracking. There was even a man with a hose winched above the concrete to water it so it didn’t harden too quickly. I know this because I watched him do it for minutes of my life I’ll never get back.

None of the above should be taken as suggesting I didn’t enjoy this programme. This was bravura telly of the old school. Instead of some over-caffeinated muppet getting conniptions over loo roll manufacture in Manchester (Gregg Wallace) or the sausage production of the Volkswagen canteen in Wolfsburg (Richard Hammond), Stimpson dared to make a fact-packed programme narrated in calm voiceover by Priyanga Burford. It unfolded with the necessary tedium and professional integrity of Chris Whitty asking for the next slide. Through this boring approach, something magical emerged. Like Chartres Cathedral, Hinkley Point C is being made by anonymous humans whose work is too rarely hymned. But unlike the former, it is not dedicated to the glory of God but to meeting British energy consumption, which is expected to double by 2050.

Questions remain. Is nuclear power a solution to Britain’s looming energy gap? Where will the nuclear waste go? Can we send it with our recycling to Turkey, and if not why not? Are we happy that a Franco-Chinese collaboration has its fingers on Somerset’s foremost nuclear button? Will lockdown delay the project? Where does all that rubble go? Quantocks, you reply. There’s no need for that language.

One last question. In the kitchens, two men were stirring a big pot. Needs more cumin, said one. They were making possibly the world’s biggest Moroccan shepherd’s pie for famished workers. I wrote in my notebook: “Do Moroccans eat Moroccan shepherd’s pie – check.” It seems very improbable. Reading that now, I realise it’s not this programme that was boring. It’s me.

Is an end to nuclear waste possible?