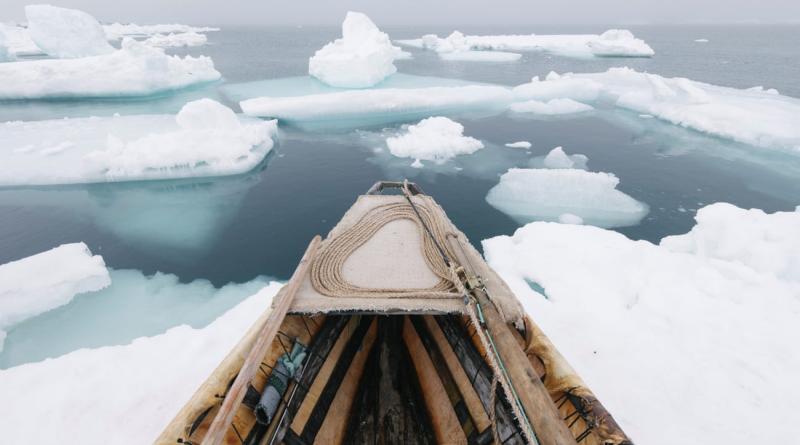 British Museum, London
From sleds made of bones to supernatural sealskin hunting suits, this stirring show celebrates the heroism and ingenuity of humans who survive in balance with nature

Awhaling suit towers up, as if some muscular occupant is still inside, looming over you. The suit, one of the highlights of this mind-expanding dive into Arctic cultures, is the Moby-Dick of clothes. Created by the Kalaallit people of south-west Greenland some time before 1834, it is like a modern survival suit: it could even be inflated by blowing into a tube. Except – it’s made of sealskin. Wearing this watertight armour, a hunter would leap from a small boat on to a whale’s back and spear it with a harpoon. But it’s not just a buoyancy aid. It is also a magical garment, thought to give its occupant the power of a seal, allowing them to stay afloat and endure the iciest water.

The artefacts in Arctic: Climate and Culture have a presence that goes way beyond their ingenious practicality. You feel and picture the lives of the peoples who have chosen, for millennia, to inhabit one of the harshest regions on the planet, using tools crafted from the flora and – mostly – fauna around them. There’s a bag made from salmon skin in the 19th century, and a whalebone breastplate worn by an Arctic warrior in the 3rd century BC, showing that the peoples of the Arctic had organised conflicts with each other. Meanwhile, a pair of walrus ivory snow-goggles from between 200 and 400AD look like props for a prehistoric sci-fi film – Arctic Punk, say.

Many of these objects defy time. A drawing by the English traveller John White, from the reign of Elizabeth I, portrays an Inuit woman with her infant son peeping out from her huge hood. Nearby on video, 21st-century Arctic women explain how they make and use a very similar enlarged parka hood to carry their children today. It looks like fun to grow up among the Inuit or the Sámi, judging by the lovingly made fur-lined romper suits and sleds – even if they were made to address urgent adult concerns. In the Arctic Circle, it seems, every day is Christmas.

This is an uplifting show, which is a surprise given the current condition of the Arctic, something the British Museum does not hold back on. A powerful graphic at the start reveals how much of the Arctic has already melted. But it gives that reality a new and complex twist. We see documentaries about polar bears starving. The fact that we know about their plight doesn’t make the stories any less harrowing. What we don’t know so much about, though, is the human story revealed here, nor its implications for how we understand our species.

Once we all lived like the peoples revealed here: 30,000 years ago, ice covered Europe. As it retreated, agriculture and towns developed. But the people captured in this show chose to carry on living in the ice age. A shaman’s drum covered with mysterious marks, seized from a Sámi man who was prosecuted as a “witch” in 17th-century Norway, attests to similar beliefs to those that some archaeologists identify in cave art. Why carry on living in the ice? Because “stone-age economics” can provide plenty and make for meaning and contentment. The world detailed here looks happy.

So, despite the foreboding we feel when we think about the Arctic, here is a heartening encounter with a radical alternative to modern living. Art in this world is not a commodified luxury confined to its own specialist “art world”. Everybody makes stuff. Everyday objects are turned into things of beauty and magic, including a 1960s snowmobile customised with a fur seat, gut windshield and arrowholders.

But that’s the other thought provoker. Animals are everywhere here, as images and the subjects of myth, but also as a resource. Ivory, skins, scales and guts – the uses Arctic peoples find for the creatures they catch are dazzling. There is clearly a vast difference between the blend of respect and needful violence that the whaling suit shows and the industrial slaughter of the modern economy. It wasn’t traditional Arctic culture that drove whales close to extinction or melted the Arctic. These peoples live inside nature, and in balance with it.

This show is in the end a rebuke to the fashionable view that Homo sapiens is a monster who began by wiping out mammoths and Neanderthals and has gone on from there. It reveals a more human view of humanity. We’re not the devil. People have lived alongside and, yes, killed the animals of the Arctic, but without destroying their world. It’s a rare exhibition these days that makes us see the heroism of being human. But that sealskin suit is an astounding monument to the crazy, clever species who would jump on a whale’s back in one of the coldest places on Earth.