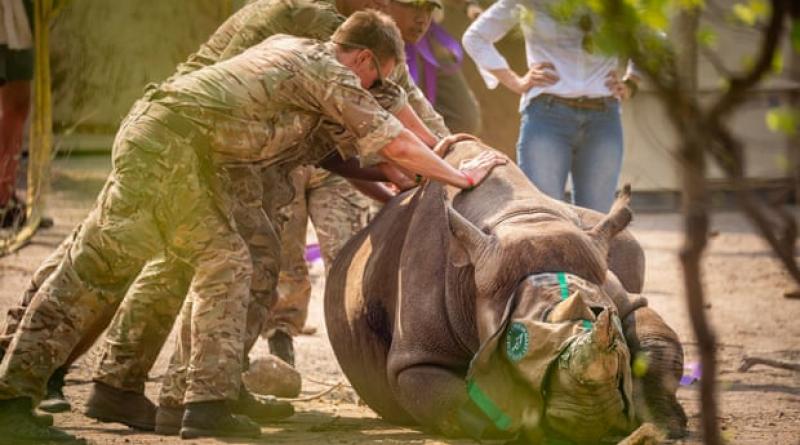 Slow recovery due to relocating groups and stronger protection through law enforcement.

Numbers of African black rhinos in the wild have risen by several hundred, a rare boost in the conservation of a species driven to near extinction by poaching.

Black rhinos are still in grave danger but the small increase – an annual rate of 2.5% over six years, has swollen the population from 4,845 in 2012 to an estimated 5,630 in 2018, giving hope that efforts put into saving the species are paying off.

The painstaking attempts to save the black rhino have included moving some individuals from established groups to new locations, increasing the species’ range and ensuring viable breeding populations, as well as protecting them through stronger law enforcement efforts. Numbers of all of the three subspecies of black rhino are now improving.

“The continued slow recovery is a testament to the immense efforts made in the countries and a powerful reminder that conservation works,” said Grethel Aguilar, acting director general of the International Union for Conservation of Nature, which compiles the global red list of species under threat.

“[But] there is no room for complacency as poaching and illegal trade remain acute threats. It is essential that the ongoing anti-poaching measures and intensive, proactive population management continue, with support from national and international actors.”

The outlook for the other African rhino species is still troubled, according to the update to the red list published on Thursday.

White rhinos are more numerous in Africa but categorised by the IUCN as near-threatened. The outlook for them has worsened in recent years, driven by high levels of poaching in South Africa’s Kruger national park. White rhinos have larger horns than their black counterparts, making them more attractive to poachers, and they are easier to find as they prefer more open habitats.

Although white rhino numbers grew between 2007 and 2012, the numbers of the southern white rhino subspecies fell by 15% during that period, from an estimated 21,300 to 18,000, cancelling out previous growth.

Poaching levels appear to have declined again in the last few years, down from a peak in 2015 when an average of 3.7 rhinos were killed every day. Estimates for 2019 suggest poaching has declined further, owing to governments taking stronger measures against the organised crime gangs behind poaching.

“With the involvement of transnational organised crime in poaching, rhino crimes are not just wildlife crimes,” said Richard Emslie, a coordinator for African rhinos at IUCN. “If the encouraging declines in poaching can continue, this should positively impact rhino numbers. Continued expenditure and efforts will be necessary to maintain this trend.”

The impacts of the coronavirus crisis are also worrying experts, as the halt to tourism will reduce resources for conservation. “The impact of Covid-19 on global tourism is likely to have significant negative impacts on private commercial wildlife operations and state national parks and game reserves that conserve rhino,” said Emslie. “Those in the field paying for all the conservation work on the ground may need more financial support so that they can maintain current efforts despite the virus.”

The costs of keeping rhinos safe have risen greatly in the last decade, however, and live sale prices have fallen, reducing incentives for private landowners and communities to keep rhinos. About half of white rhinos and nearly 40% of black rhinos are on private land or land managed by communities. If the rhinos are viewed as a cost, that will further hamper efforts to protect them.

Thursday’s update to the red list showed tha more than 31,000 species around the world are threatened with extinction. The red list is likely to be updated at least three more times this year.