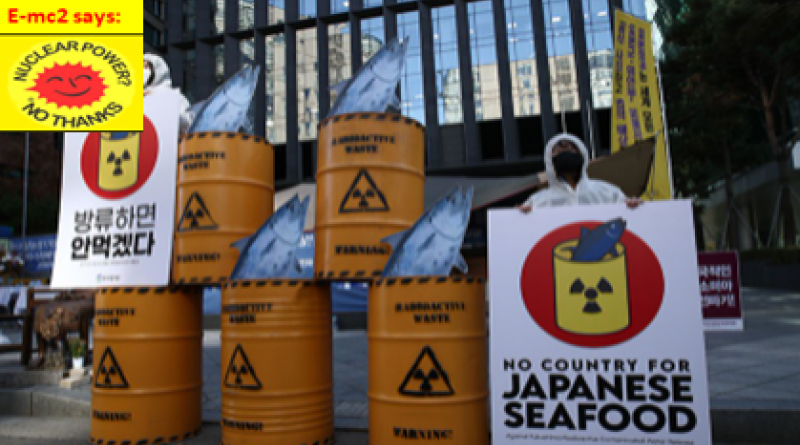 Neighbouring nations have denounced Japan’s plan to release water used to cool the nuclear plant's melted reactors into the sea, but researchers say the dangers are low.

Japan’s proposal to discharge more than one million tonnes of contaminated water from the ruined Fukushima Daiichi nuclear power station into the ocean off its east coast has been strongly opposed by neighbours including China and South Korea. But scientists say the risks are likely to be minimal if the release is carried out as planned.

Japan revealed the proposal in April, causing South Korea’s foreign minister to initially express “strong regret and serious concerns”. According to China’s state news agency Xinhua, Chinese scientists have also objected to the proposal, with Liu Senlin at the China Institute of Atomic Energy in Beijing describing it as “extremely irresponsible”.

But other scientists, and the director-general of the International Atomic Energy Agency (IAEA), have countered that the radiation in the treated waste water will be very low, and that the water will be released gradually over several years to minimize any risk.

“As a scientist I have to keep a cool view on all this, and look at the facts, and the facts are not telling me that this is something that we should be very worried about,” says Jordi Vives I Batlle, a scientist at the Belgian Nuclear Research Centre in Mol, who studies the effect of radiation on marine ecosystems.

The earthquake and tsunami that struck the east coast of Japan on 11 March 2011 led to the catastrophic failure of cooling systems at the power station. In the subsequent decade, 1.25 million tonnes of seawater have been pumped through the damaged units to stop the molten fuel debris from overheating, and pumping continues. The contaminated water has been treated to remove radioactive material and stored in more than 1,000 steel tanks on the site.

The release of treated waste water is part of the standard operation of nuclear power stations. However, Vives I Batlle says that the huge quantities amassed at Fukushima, and the high original concentration of radionuclides in the water through its direct contact with the melted reactor, do mark this situation as unusual.

But nothing in the plan suggests that the treated water will contain levels of radiation greater than the background levels present in the environment as a result of natural processes, adds Vives I Batlle, who has been conducting research in Fukushima since the tsunami.

The Tokyo Electric Power Company, which operates Fukushima, says treatment removes most radionuclides, including caesium and strontium. Only tritium remains in any quantity, and this emits one of the lowest radiation doses of any radionuclide, notes Vives I Batlle. “You can discharge it in quantity more than other radionuclides, because it has a very low impact,” he says.

Deborah Oughton, a nuclear chemist and director of the Centre for Environmental Radioactivity at the Norwegian University of Life Sciences in Oslo, adds that tritium is a naturally occurring radionuclide found in the environment and in living organisms, including humans.

Japan’s modelling of the release — which will occur over two to three years — suggests that radiation levels will be “within what’s allowed in drinking water”, Oughton says. “The direct environmental and human health impact of the radioactivity, in my opinion, will be very, very low.”

Even under the worst-case scenarios modelled by Vives I Batlle — in which all of the water is released at once before it has been fully treated — levels of radiation in exposed marine environments would still be “100 times less harmful than the background radiation,” he says.

In a move that could further allay critics’ fears, and a global first, the IAEA is working with the Japanese government in planning, implementing and monitoring the release.

Shigeyoshi Otosaka, an oceanographer and marine chemist at the University of Tokyo who studied radionuclide dispersal patterns following the tsunami, says communication of the scientific data following the release must be done carefully to avoid misinterpretation. Emphasizing “the detection of the very low levels of radionuclides will lead to misunderstandings or reputational damage”, he says.

Oughton also highlights the potential impact on the Japanese fishing industry if the release is not handled in a way that maintains public trust. Follow-up monitoring must be rigorous and careful, to reassure people “that levels in the seafood are not damaging to human health”, she says.

Millions of tons of nuclear wastewater from Fukushima will be dumped into the sea.