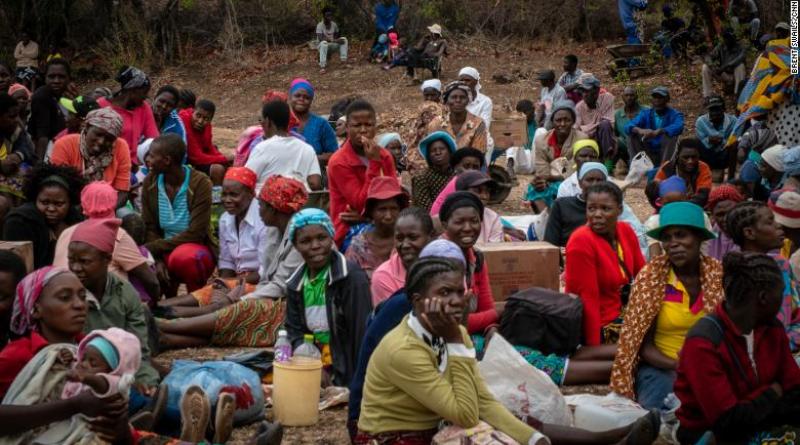 But a multi-year drought has slowed large sections of the imposing falls to little more than a weak stream, and the lush vegetation they once nourished is hot and dry.

The parched waterfall is perhaps the most visible effect of the drought that is hammering this region. But it is not the most devastating. The World Food Program says that more than 7 million people in Zimbabwe alone are going hungry, with a further 45 million people across southern Africa at risk.

As delegates desperately search for a practical plan for cutting emissions at the COP25 meetings in Madrid, Spain, this week, this region is a stark reminder that the climate crisis is here and now -- and that countries that did the least to cause the climate crisis are already being hit the hardest.

"Our future is still ahead of us," said Nkosi Nyathi, a 16-year-old climate activist from Victoria Falls, ahead of his flight to COP25 in Madrid. "We are looking at what is already happening with the drought. What is our future going to be like? Even just 10 years down the line or 15 years down the line, it will affect us very much."

Nyathi started campaigning for the environment when he was just 10 years old. He says while he wasn't good at sports, he was good at debating, so he started going into the communities to educate people about renewable energy and climate change.

His visit to Madrid -- his first trip out of the region -- is part of an initiative by UNICEF to involve more youth voices into the climate debate.

But Nyathi knows that the impact from emissions reductions can't come from here in Zimbabwe. It needs to be done in industrial countries.

The whole of Africa contributed around 1% of the historic emissions that caused climate change, according to noted climate expert Francois Engelbrecht, a scientist at the Global Change Institute at the University of the Witwatersrand and lead author on the IPCC climate reports.

The United States bears the biggest historical responsibility for emissions. Despite this, the Trump administration is in the process of pulling out of the landmark Paris climate agreement.

"I think Africans are fully realizing how urgent the need now is for worldwide climate action," Engelbrecht says. "The southern African region, in particular, is already hot and dry and is projected to become even hotter and drier under future climate change. In fact, the region is projected to warm at more or less double the global rate of warming."

One of those feeling the repercussions of global warming is Felistus Ncube, a subsistence farmer in western Zimbabwe.

"I wish that they could stop climate change because we are suffering," she says. "We depend on farming to survive as a family and if the climate stays like this we won't make it."

Ncube doesn't need climate science to tell her how things have changed in this part of the country. As a child, they could depend on the rains to plant their maize and sorghum, a grain used to feed livestock. But no longer.

"The rain levels have been falling and they always come late," she says as she collects her allotted food aid. Even with the assistance, Ncube and her two grandchildren live off a single meal a day. The children's parents left for South Africa years ago as farming became unrealistic.

Making the drought worse, the Zimbabwean economy is in a tailspin with rising inflation and failed political reform that has left residents living under more brutal conditions than ever before.

When Hilal Elver, the UN Special Rapporteur on the right to food, recently visited the country she called the crisis "man-made starvation" caused by government disfunction.

But unlike in wealthy nations, many countries in this region -- and in sub-Saharan Africa as a whole -- do not have the financial or organizational capacity to ready their populations for a changing climate. The Paris agreement factors in this climate response, but policy makers say it isn't enough.

And if it isn't enough now, it won't be enough in the future. Climate models show that without substantial and sustained emissions cuts, southern Africa is heading for a tipping point.

"At the current rate, with greenhouse gas concentrations continuing to increase in the atmosphere, the southern African region five decades from now will be unrecognizable compared to the region we are living in today," says Englebrecht.

Extreme climate events will come more frequently and on multiple fronts: Sustained droughts and heatwaves will continue; cyclones like Idai that hit Mozambique and Zimbabwe in March will get stronger; and the prospect of Day Zero water events -- like when Cape Town very nearly ran out of water last year -- are three times more likely, Englebrecht says.

Climate models project a nightmare scenario where staple crops such as maize won't survive the heatwaves and even cattle farming -- key to the livelihood of millions -- will be impossible.

And climate experts say younger generations globally will start feeling the disastrous effects of human-driven emissions much like the scenarios now being faced in southern Africa.

For Nyathi, the impact of climate change is already critical, and the inequality of the climate crisis is obvious.

"The message is simple: Guys, we are all humans, we are all breathing the same air, these countries are polluting, and we are facing the worst of it," he says.

Climate crisis likely to fuel conflicts over water and migration, US analyses say