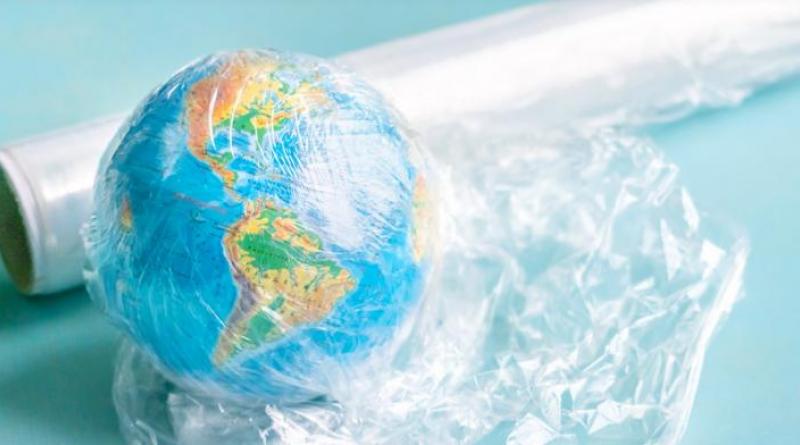 We could attempt to slow the devastating effects of climate change through national sacrifice, but we won’t

I think about packaging a lot, like the stuff everything comes in. The excess of our excess. Especially around this time of year, as we create yet another small Pacific trash island of the dispensed, deconstructed, and discarded just to enjoy our briefly-wrapped boxes containing things we don’t need. I saw a woman get approximately 67 plastic bags the other day at my neighborhood grocery store. She was buying her weekly groceries, and each type of grocery was separated from the others by two plastic bags. They double-bagged a hand of bananas. “Hand” is the correct name for a bunch of bananas, like a “murder” of crows, or an “island” of trash.

I’m no better than the bag lady, though. Moments ago I ordered coffee on a plane, which is itself a kind of a package — albeit a reusable one — and the cream comes in little capsules, the coffee in a wax paper cup (not recyclable or compostable), the cookie in a thin plastic wrapper that almost seems worse than a bulkier wrapper. I don’t know why, but thin plastic seems more insidious. More dangerous. I’ve heard that the ocean is full of them, microplastics, and the fish eat them, and we eat the fish, and now we’re part plastic fish.

The plane looks beautiful from the ground, but you can see just how fucked it is, up here. The plumes from a passing jet are not white but a dark toxic brown-grey, metallic like the words you hear in pollution movies: benzene and cadmium and mercury. The ground looks beautiful from above because I can’t see all the microplastics, or even the macroplastics. Still, you can tell by the mountains that the world is changing ’cause when I was a kid, there was more snow. No one seems to care.

Most people don’t want to talk about it. It’s too big and too bad, a bummer.

My life is a series of packages these days: apartments, boxes, storage containers, suitcases, rooms, bigger rooms, JUUL pods, take out containers, cans and cans and cans of fizzy water. Tube planes and tube subways. Box cars, not boxcars, though I do like trains. It’s hard as someone with major environmental anxiety whose job relies on travel, since travel relies on pollution and, while I want to do my job, I also don’t want to look down from the plane someday and see no more snow on the mountains, or even worse, no green.

Most people don’t want to talk about it. It’s too big and too bad, a bummer. You’re ruining the mood, you’re being heavy, you’re a buzzkill. But it’s happening all around us, and it just seems insane that we don’t do anything.Eighty-six people burned to death this summer in Paradise, California.

Some people do try, or at least assuage their guilt, with a Prius and a compost bin. It’s kind, but it’s also like a passenger on the Titanic offering up a wad of chewed gum to patch the iceberg-sized hole sinking us all. It’s not enough. We will all drown. Not literally, although for some, quite literally. Millions, perhaps billions. Much of Bangladesh could be underwater this century, and we know this now, yet we still manage to look forward to Netflix or the gym while ignoring the Bangladeshis that will float on the news someday (but maybe not ignoring the documentary about how they died before they floated).

We could probably change the course of climate change, or at least slow it down. It would require huge changes, but it might work. For instance, to battle traffic and congestion, cities like Bogota only allow license plates ending in even numbers to drive during rush hours on certain days of the week. Odds get the remaining weekdays, and on weekends you can go wild, the odd- and even-ending license plates intermingling like it’s Spring Break. Rich people just buy two cars and know a guy who can get them one of each plate, but for the most part this system has lowered emissions and improved air quality for the Rolos.

But we’d have to do more than just cutting our driving in half; we’d have to say no more elective airfare, no more vacation, no more running around on errands or to barbecues. We’d have to actually make sacrifices, which are not actual sacrifices but inconveniences, like recycling all your containers and not using straws or anything that comes in those insidious little plastic wrappers. Including my two cream capsules, which exist so that no one has to be inconvenienced by the lady in the plane reaching over to hand me a carton of milk. Two more plastic capsules, emerging from a container, which is currently on a tube that’s tearing through the sky and spitting brown-grey dust.

The RV revvers aren’t to blame; it’s the company men, the corporations. People who have things to sell, and more wealth, capital, and assets than anyone needs.

No one is willing to make these sacrifices; we are greedy, and the more we have, the greedier we become. No one would give up vacations indefinitely, especially if they didn’t have a choice in the matter. I can see it now: round, red, angry American men staging protests where they rev RV engines in unison as an act of resistance. Their Cracker Barrel version of shooting guns into the sky. It’s almost funny. Almost, and since it’s very realistic it kind of makes you say, well, maybe we’re done here. I’m not sure we don’t deserve the consequences of our own excess.

The RV revvers aren’t to blame, though; it’s the company men, the corporations. People who have things to sell, and more wealth, capital, and assets than anyone needs. For that to continue, we have to keep consuming, keep thrusting ourselves across the sky in containers with more containers inside them. But why? If all the stuff is already here — the food and the water, the single-family homes, the medicine — why do we have to compete for them?

Imagine if we all did make the necessary sacrifices. We give up Delta and Alaska and Virgin Atlantic and fund great teams of engineers to build electric railroads, employing scores of workers to contribute to “the grand project.” Instead of vacationing at Disneyland, your family has to go to the local state park for three days and look into each others’ dopey, similar-looking faces and use outhouses where the wind blows through the vent and up against your asshole, like you’re shitting in the sky. A steward shows you the jays and salamanders and tells you the story of the Spaniard conquistador that the great peak is named after. The family next to you is from Denver; they traded their vacation pass with a local family who is taking in the Rockies as we speak. The dads take the kids to fly fish and the moms or partners or what have you hang back and discuss their compost regimens and canning strategies. I know there are gender problems with that last sentence. Don’t let them distract you from the larger point.

This all sounds kind of nice. The idea of a national identity, a collective meaning, would be intact once again, what, with us getting together to save the world like that. It’s just like when women went to work in metal factories and on railroads during the world wars, except instead of the Axis we’d be fighting the results of our negligent, excessive past. The Grand Project. Bill Pullman declaring war on the aliens. Will Smith punching them.

It won’t happen, though.

And it won’t be nice, either.

Temperatures will rise; water will, too. Ice caps will melt and the brown-grey dust will match the brown-grey hills. Soil will become fetid; wells will flood with salt water. Food and water will become more and more scarce and we’ll all drink Coca Cola ’cause the alternative will be salt water with the brown-grey dust and the microplastics. Summers will be unbearable and winters will be summers. The same people who denied the coming iceberg will escape to bunkers. The round, red, angry American men will form bands and take the resources we’ve saved by force. The same resources we begged you to acknowledge were waning. It will all be lost: nature, peace, love. We’ll miss the days of boredom and apathy: Banality will be a luxury and life will be hell and we’ll envy the floating Bangladeshis.

What I wonder, though, is will we at all feel bad? When the water rises and the tubes no longer spit the brown-grey dust and the microplastics are in our babies ’cause they ate the plastic fish and are now plastic babies, will we have the clarity to at least feel stupid about this whole thing? Will we regret the missed opportunities, the hubristic denial of canary after canary hitting the bottom of the cage as the roaring rumble slowly crawls closer from the dark depths of the coal mine?

If we do, I might say I told you so — even as someone who actually had two coffees, which means four creams, and also six cookies. And I’m one of the good ones.