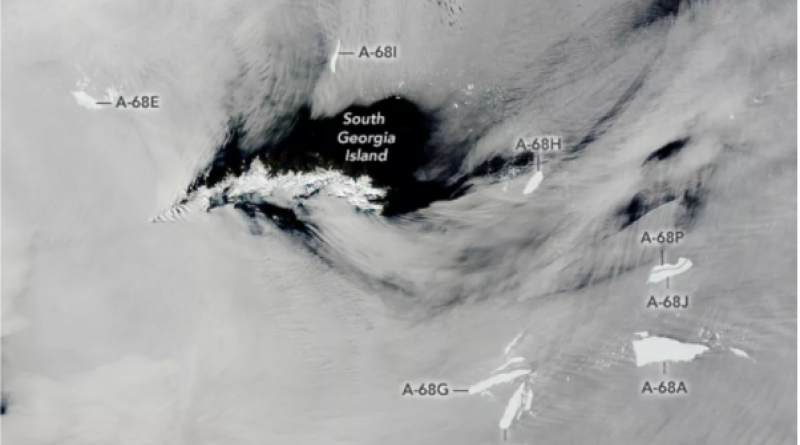 Once the size of Delaware, iceberg A-68a is now a broken puzzle of ice.

The ocean north of Antarctica has turned into an "alphabet soup" of broken icebergs, according to a new blog post on NASA's Earth Observatory website.

In a satellite photo snapped on Feb. 11, 2021, the jagged outlines of 11 fractured icebergs swirl around a remote, penguin-filled island called South Georgia, located about 940 miles (1,500 kilometers) northeast of the Antarctic Peninsula.

Each frozen chunk is a piece of the once-mighty iceberg A-68a, which held the title of world's largest iceberg for more than three years before shattering into a dozen pieces a few weeks ago. Now, each broken bit of the puzzle has its own name, beginning with A-68b, and ending with A-68M. (Several of the icebergs are not visible in this photo.)

Iceberg A-68a originally broke off of Antarctica's Larsen C Ice Shelf on July 12, 2017. At the time, it measured more than 2,300 square miles (6,000 square kilometers) — large enough to hold the five boroughs of New York City five times over. Despite its impressive surface area, the berg was incredibly thin, and it began losing large chunks of ice beginning in April 2020.

In late 2020, the berg appeared to be on a collision course with South Georgia island (a British overseas territory). Researchers feared that the berg would make landfall near the island, cutting off the feeding routes for thousands of seals, penguins and other animal residents of South Georgia and potentially leading to widespread famine.

Fortunately, the berg changed course and began drifting around the island, even before it shattered into the dozen-or-so chunks bobbing around the area today. The threat to the island's animals is over for now.

Still, British researchers are eager to study the broken iceberg's potential impact on the seawater around South Georgia. Two robot submersibles are scheduled to study the water temperature, salinity and clarity around the remains of A-68a (and all its offspring) for several months, beginning later this year, Live Science previously reported.