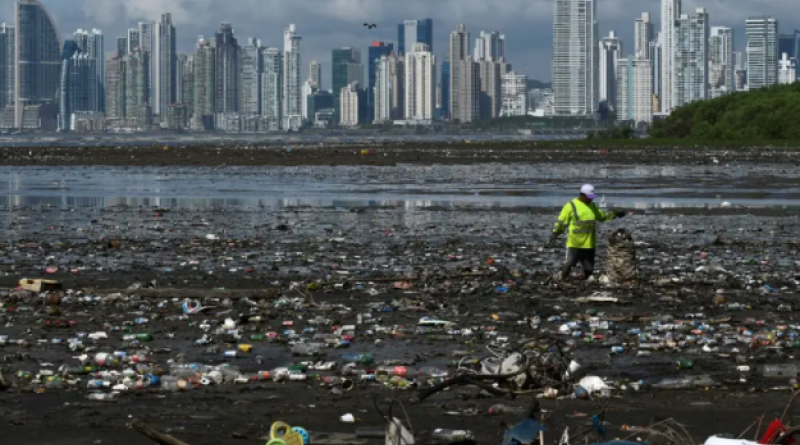 20 firms will account for most of the addtional 70 million metric tonnes of polymer churned out in the next four years.

The world’s biggest manufacturers of single-use plastic are set to increase their production capacity by 30 per cent by 2025, meaning a further one trillion one litre plastic bottles and caps, one trillion plastic bags and one trillion metres of kitchen film will be produced, consumed and discarded as waste, according to a new report.

The discovery is detailed in the Plastic Waste Makers Index from Australia’s Minderoo Foundation, in partnership with market researchers Wood Mackenzie, the London School of Economics and Stockholm Environment Institute, which also says that just 20 petrochemical companies will account for 60 per cent of the 70 million metric tonnes of additional polymer churned out in the next four years.

The report, based on a study of 1,000 factories producing the raw materials, stresses the devastating environmental impact of our material society by recording that 130 million metric tonnes of single-use plastic were thrown away in 2019.

The majority of that total was burned, buried in landfill or simply tossed aside as litter — and 98 per cent of it was produced from finite fossil fuels in the first place.

“The cost of single-use plastic is enormous,” Minderoo’s researchers write. “Of all the plastics, they are the most likely to end up in our ocean, where they account for almost all visible pollution, in the range of five to 13 million metric tonnes each year.

“Once there, single-use plastics eventually break down into tiny particles that impact wildlife health - and the ocean’s ability to store carbon. Single-use plastics contain chemical additives such as plasticisers that have been found in humans and are linked to a range of reproductive health problems.”

The current growth rate of production for this type of packaging is such that, by 2050, it will account for between five and 10 per cent of global greenhouse gas emissions, the researchers warn.

“Since most plastic is made from oil and gas - especially fracked gas - the production and consumption of plastic are becoming a significant driver of the climate crisis,” environmentalist and former US vice president Al Gore writes in the report’s introduction.

“Moreover, the plastic waste that results — particularly from single-use plastics — is piling up in landfills, along roadsides, and in rivers that carry vast amounts into the ocean.”

On the rationale for the ongoing increase in production, they explain: “The business case for the growth in single-use plastic polymer production rests on projections that demand will rise in developing economies.

“But waste collection and recycling infrastructure in these countries is often immature: ‘business as usual’ increases in single-use plastic consumption will overwhelm their infrastructure, with the vast majority ending up as pollution on land and in the ocean.”

The Plastic Waste Makers Index also claims that just three petrochemical giants - ExxonMobil, Dow and Sinopec - account for 16 per cent of the world’s plastic waste, that the top 20 firms account for 55 per cent and that the top 100 account for 90 per cent.

ExxonMobil reportedly added 5.9 million metric tonnes to the global waste mountain in 2019, followed by Dow on 5.5 million and Sinopec on 5.3 million.

Those companies are being supported by major financial houses, the researchers argue, pointing to the fact that the world’s top 20 institutional asset managers hold $300bn in shares in the parent companies of the polymer makers and that 20 of the biggest banks, including Barclays, HSBC, Bank of America, Citigroup and JPMorgan Chase, have lent out $30bn to the sector since 2011.

But the need to curtail plastic waste is also “an entrenched geopolitical problem” that extends beyond the corporate sector, they say, given that 30 per cent of the industry is state-owned, with countries like China, Saudi Arabia and the UAE holding interests in their biggest corporations.

Responding to the report, ExxonMobil told the BBC in a statement that it is “taking action to address plastic waste by increasing plastic recyclability, supporting improvements in plastic waste recovery - for example, through our founding membership in the Alliance to End Plastic Waste - and minimising plastic pellet loss from our operations.

“We are also working on advanced recycling solutions that create and capture value from plastic waste with opportunities for lower overall greenhouse gas emissions over the full life cycle of the plastic.”

At a national level, the biggest producer of single-plastic waste per capita was Australia, followed by the US, South Korea, Britain and Japan.