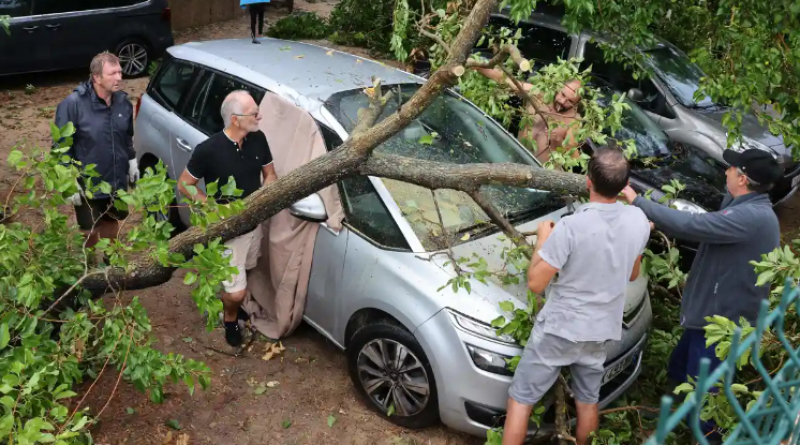 Prolonged heat across parts of northern and western Europe ended with torrential showers and thunderstorms this week.

On Wednesday, parts of southern England received 50-65mm of rainfall within a few hours, causing London’s Gatwick airport to delay and cancel dozens of flights.

Italy, France and Belgium all experienced extreme weather too, with thunderstorms in the Italian region of Liguria producing thousands of lightning strikes on Thursday and hail that measured 4-5cm in diameter. Winds were also recorded with gusts of about 75mph, which left railways such as the Genoa to La Spezia route suspended. A violent thunderstorm in Corsica, France, killed three people and injured a dozen more because of falling trees and collapsing roofs. This same storm produced wind gusts exceeding 130mph, leaving 45,000 households without power.

Torrential rains coupled with dry soils from an unrelenting summer have led to significant flash flooding for these regions. Big cities such as London, Paris and Marseille have had serious disruption to transport infrastructure, with streets waterlogged and underground stations closed.

Flash flooding has also been a hazard in western China, with 18 people killed and 36 still missing in Qinghai province on Wednesday night. A rainstorm in the mountainous region of Datong county caused flood water to rush down the mountain and trigger a landslide that has affected more than 6,000 people in six villages, with damaged homes and uprooted trees. It came a week after seven people died in after flash flooding in China’s Sichuan province.

Millions of people in south-west China are facing power cuts after prolonged heat caused problems with electricity supplies. Nine-hundred million people in China have been under heat warnings for 64 days straight this summer, the longest in recorded history.

Prolonged heat has hit hydropower generation for parts of the country as reservoirs dried up, with big rivers such as the Yangtze experiencing a 20-50% reduction in water volume, reducing the supply across provinces such as Sichuan. Local authorities have tried to reduce demand for electricity by ordering power rationing in homes, offices, and shopping malls.

The floods tell us the river is sick. We should listen to Indigenous knowledge to help Country heal