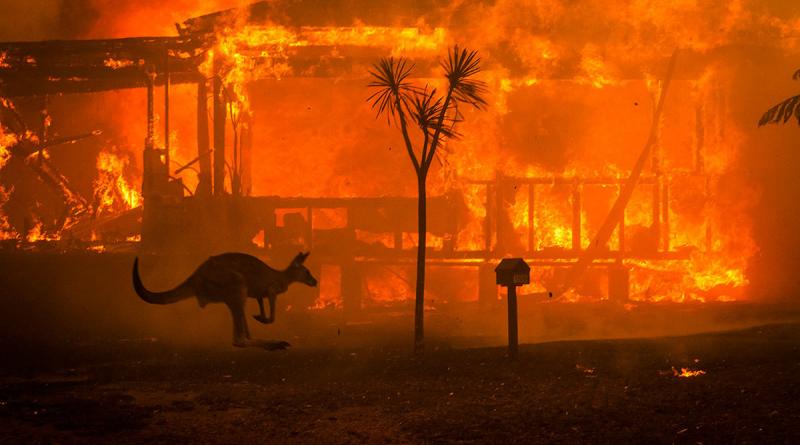 Matthew Abbott took one of the most widely shared images of Australia’s devastating bushfires, but he went to bed first before sending the picture via WhatsApp to a photo editor the next morning, New Year’s Day.

Then that morning, he went out to spend time with his wife, Anna-Lena, an editor forDer Spiegel.

It wasn’t that Abbott was lackadaisical about capturing a dramatic life-and-death situation the day before—it was just that there had been little international interest in what he’d done on the fires in the weeks previously.

This time, however, he got a message from a New York Times editor; if he could send a high-resolution version of the image, they could get it on the front page. Within hours, Abbott’s image (above) became his most impactful in his 14 years of photography. It was on the covers of several British newspapers and put on Instagram by Greta Thunberg and Leonardo DiCaprio.

Abbott had been taking photos with his Nikon D5 in a community called Lake Conjola, after driving in as fleeing residents headed the other way. In between images of a burning home, he helped neighbors who were hosing down their own homes by moving garbage bins away from their buildings. Suddenly he spotted a group of kangaroos, and one of them—panicked, frightened—that was heading toward the burning building.

“It would have been safer for it to run in the other direction, but it just sort of darted past me and the past the house,'' Abbott told my colleague David Beard on Thursday. (Abbott said the animal bounced past the flames to at least temporary safety).

Why is the image so popular? The Sydney-based photographer surmises the distressed, confused kangaroo—Australia’s iconic animal—symbolizes the nation’s suffering in what some have called a harbinger of the dangers of a warming world.

Abbott (@mattabbottphoto on Instagram) has lost weight and has had breathing issues covering the blazes and firestorms, the record heat, and the longest droughtrecorded since European settlement on the continent. Among the charred landscapes are places where he vacationed as a kid. Heavy rain is not expected until March, and he (with better breathing equipment) will keep covering the story.

“I'd be lying if I didn't say it was draining,” Abbott says. “I feel a strong conviction that this is incredibly important, and it's a wake-up call for Australia—and the world".