Spreading rock dust on fields could remove vast amounts of CO2 from air. 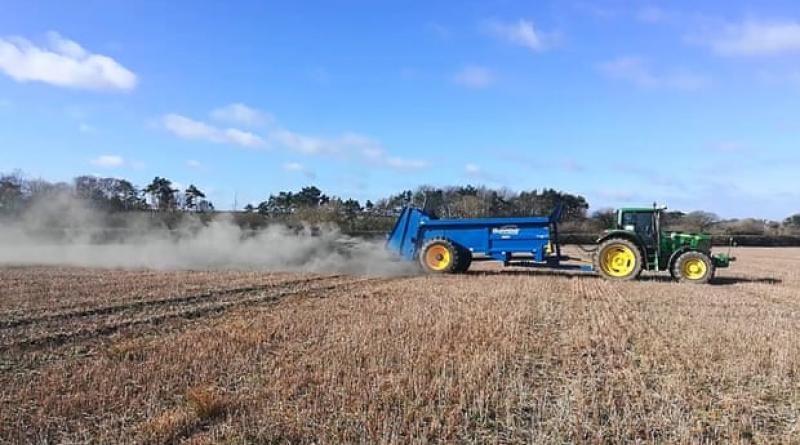 It may be best near-term way to remove CO2, say scientists, but cutting fossil fuel use remains critical.

Spreading rock dust on farmland could suck billions of tonnes of carbon dioxide from the air every year, according to the first detailed global analysis of the technique.

The chemical reactions that degrade the rock particles lock the greenhouse gas into carbonates within months, and some scientists say this approach may be the best near-term way of removing CO2 from the atmosphere.

The researchers are clear that cutting the fossil fuel burning that releases CO2is the most important action needed to tackle the climate emergency. But climate scientists also agree that, in addition, massive amounts of CO2 need to be removed from the air to meet the Paris agreement goals of keeping global temperature rise below 2C.

Basalt is the best rock for capturing CO2, and many mines already produce dust as a byproduct, so stockpiles already exist. The researchers also found that the world’s biggest polluters, China, the US and India, have the greatest potential for ERW, as they have large areas of cropland and relatively warm weather, which speeds up the chemical reactions.

The analysis, published in the journal Nature, estimates that treating about half of farmland could capture 2bn tonnes of CO2 each year, equivalent to the combined emissions of Germany and Japan. The cost depends on local labour rates and varies from $80 per tonne in India to $160 in the US, and is in line with the $100-150 carbon price forecast by the World Bank for 2050, the date by which emissions must reach net zero to avoid catastrophic climate breakdown.

“CO2 drawdown strategies that can scale up and are compatible with existing land uses are urgently required to combat climate change, alongside deep emissions cuts,” said Prof David Beerling, of the University of Sheffield, a lead author of the study. “ERW is a straightforward, practical approach.”

Prof Jim Hansen, of Columbia University in the US and one of the research team, said: “Much of this carbonate will eventually [wash into] the ocean, ending up as limestone on the ocean floor. “Weathering provides a natural, permanent sink for the carbon.”

Hansen, who famously warned the US Senate about global warming in 1988, said improving soil could also underpin food security for billions of people.

Other proposed ways of pulling CO2 from the atmosphere at similar rates include using chemical solvents to capture it directly from the air, or growing energy crops, burning them to produce electricity and then burying the CO2emissions. The new research suggests ERW will be less expensive than either and, unlike energy crops, does not compete with food for land. But the scientists said all approaches may be needed to beat the climate crisis.

Planting trees and adding charcoal to soil also remove CO2 from the air, and these approaches could potentially be used in combination with ERW to maximise the impact. “Planting trees is an excellent option for CO2 removal but is not sufficient on its own,” said the scientists.

Basalt is preferred for ERW as it contains the calcium and magnesium needed to capture CO2, as well as silica and nutrients such as potassium and iron, which are often deficient in intensively farmed soils.

Some farmers in south-east Asia already use it to boost depleted silica in rice fields, while trials in the Netherlands are using it to boost tree planting. Most importantly, ERW reduces soil acidity, which already affects about 20% of arable fields around the world.

Basalt is one of the most common rocks on Earth, and waste dust from mining could be used for ERW, as could waste from cement and steel manufacturing. This would remove the need to grind the rocks into fine particles, which requires energy. But how big these waste stockpiles are is unknown.

“We are calling on nations to make inventories,” said Beerling. He said mines in Northumberland, UK, that produce basalt aggregate for construction produced 20-30% waste dust. But he said some mining specifically to produce basalt rock dust would probably still be needed, using existing mine capacity rather than new mines.

Beerling said ERW did not require new technology, and farmers could get behind it, adding: “If you could demonstrate to farmers in China and India, for example, that they are going to get crop yield increases and get paid $100 a tonne for removing CO2, then it becomes really attractive.”

Prof Johannes Lehmann, of Cornell University, and Angela Possinger, of Virginia Tech, both in the US, who were not involved in the study, wrote in a commentary on the work in Nature: “Any carbon sequestration involving soils is a formidable challenge because the technologies must be used on vast areas of land that are operated by hundreds of millions of farmers. Farmers must be fully behind such a global effort or it will fail.”

They added: “Benefits to crop growth will need to be prioritised, as will financial incentives.” But they concluded that using ERW to “support soil health and crop production could emerge as our best near-term solution to the problem of removing CO2 from the atmosphere”.

Beerling said that while the model used for the analysis was sophisticated, it would be important to compare its estimates with real-world experiments under way on 4ha plots in the UK, US, Australia and Malaysian Borneo, and that more research was needed on the detailed soil chemistry. “It is quite a young science,” he said.