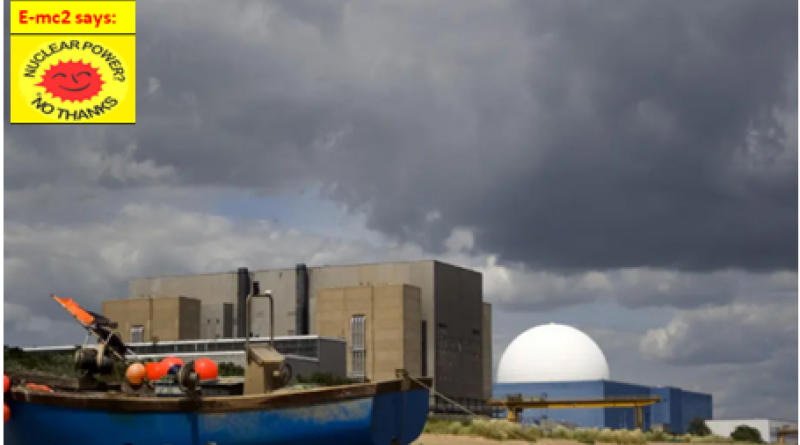 Impact on environment will be ‘national disgrace’, says co-founder of Greenpeace UK.

More than 500 million fish could be sucked out of the sea and into the vast cooling system of the proposed Sizewell Cnuclear power station if the £20bn project goes ahead, campaigners have warned.

The existing nuclear facility on the site, Sizewell B, already “impinges” – sucks in – 8 million fish a year, but planning documents suggest the new facility would require a cooling system 2.5 times the size of Sizewell B, and would take in 131 cubic metres of seawater per second.

A local campaign group has described the potential impact as “wholesale carnage”, while the RSPB has said the loss of fish will impact terns and red throated divers, while the development of the power station could also badly impact otters, water voles, marsh harriers, bats and rare natterjack toads.

The campaign group Together Against Sizewell C (Tasc), used figures taken from EDF’s planning documents to calculate the numbers of fish which could be sucked into the cooling mechanism over a 20-year period, between 2035 and 2055. This time frame is the assumed start date for Sizewell C and when Sizewell B is expected to cease operations.

Tasc said: “In that 20-year period, an estimated 560 million fish will be sucked into (entrained) and impinged within the cooling systems of both plants, with a toll of 28.5 million fish every year.”

They said Sizewell C would be responsible for 20 million of that annual figure, or over 70 per cent of the total.

Pete Wilkinson, the chair of Tasc and also a co-founder of Greenpeace UK, told The Independent: “This is the tip of the iceberg. The published figures do not take into account the millions of fish fry, fish eggs, crustaceans, immature fish and other marine biota lost to the cooling systems.

“The loss to fisheries is unacceptable.”

Tasc highlighted the fact that due to current stock preservation controls, a person fishing from Sizewell beach who lands a small number of seabass is likely to be prosecuted unless they release the catch.

“Yet EDF’s operational nuclear power plant, Sizewell B, is [already] responsible for the impingement of over 800,000 bass every year and Sizewell C is expected to take over 2,000,000 bass a year should it ever become operational,” the group said.

Mr Wilkinson also warned about the wider impacts of both building the powerstation and its long term effect on wildlife.

The proposed site is within a designated area of outstanding natural beauty, next to a nature reserve, and in close proximity to several sites of special scientific interest (SSSIs).

He also described the site as being vulnerable as it is on “a fast-eroding coast, in a flood risk area which is subject to storm surges”.

“A tranquil agricultural, tourist-based economy in a rural setting will be urbanised, sacrificed for a nuclear plant which is not needed,” he said.

Tasc said allowing the development to go ahead “flies in the face of the government’s so-called green agenda”, and called for the project to be halted.

“Continued official silence on these issues will be a dereliction of duty and a national disgrace,” Mr Wilkinson said.

He also said he expected government agency Cefas “to condemn this level of impact at the inquiry stage of the Sizewell C development consent order”.

Cefas told The Independent its role in the planning of the nuclear power station “is to ensure that the marine evidence base is scientifically robust, to fully assess the potential marine impacts and, where feasible, to work with EDF engineers to reduce potential impacts by design optimisation”.

It disputes Tasc’s figures, which they described as “a considerable overestimate”, and said they did not take into account mitigation methods to stop fish being sucked into the cooling pipes.

A Cefas spokesperson said: “These figures also take no account of the fish recovery and return system and other mitigation measures that will be installed at Sizewell C. These reduce impingement and return impinged fish to the sea.

“If we take account of the mitigation measures, then the total numbers of impinged fish fall to less than 5 million per year, less than 20 per cent of the number mentioned [by Tasc].

The statement added: “These are large numbers, but the essential context is that fish populations produce vast numbers of young.

“Indeed, if every baby fish survived then fish numbers would increase by a thousand times or more with every generation!”

Martin Fowlie of the RSPB told The Independent: “If Sizewell C is built, it would sit slap bang on the border of Minsmere, home to over 6,000 types of animals, plants and fungi.

A spokesperson from Sizewell C told The Independent:  “Our assessments show that the fish impacted are mainly sprat and herring.

“The intake of these species by Sizewell C is 0.01 per cent of the stock in the area. Fisheries scientists describe the impact of new nuclear power stations on the marine ecosystem as ‘insignificant’.

In February this year, it emerged that major investors had ruled out providing funding for the project.

Legal and General Capital – the investment arm of the financial services company – has said it is not backing EDF’s plans, with their decision coming days after another major potential investor, Aviva Investors, suggested they had environmental and other concerns about nuclear power.

An Environment Agency spokesperson told The Independent: “Our stringent regulation of the nuclear industry ensures that companies must operate to prevent harm to the environment and local communities.

“We are currently considering NNB Generation Company’s environmental permit application for their proposed cooling water discharge, and will determine it once we have assessed the impacts to the marine environment – including fish populations.”

Millions of tons of nuclear wastewater from Fukushima will be dumped into the sea.