Second wave of locusts in east Africa said to be 20 times worse. 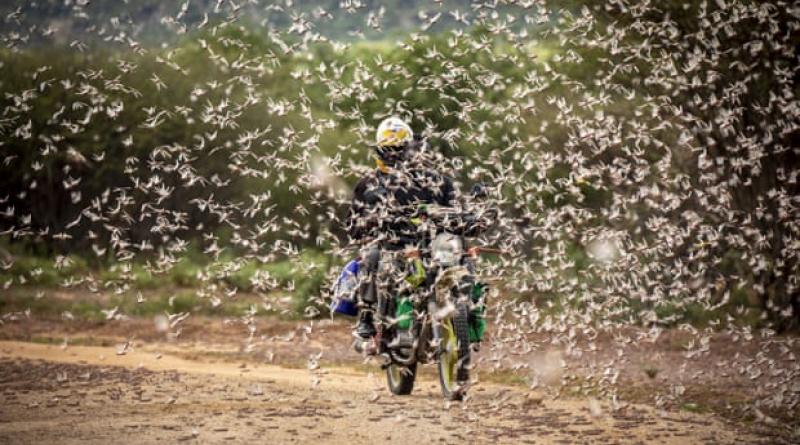 UN warns of ‘alarming and unprecedented threat’ to food security and livelihoods in the region.

A second wave of desert locusts is threatening east Africa with estimates that it will be 20 times worse then the plague that descended two months ago.

The locusts present “an extremely alarming and unprecedented threat” to food security and livelihoods, according to the UN. A swarm of just more than a third of a square mile can eat the same amount of food in one day as 35,000 people.

In its latest locust watch update, the UN said the situation was “extremely alarming” as an increasing number of new swarms form in north and central Kenya, Ethiopia and Somalia.

Uganda reported two swarms arriving last week from neighbouring Kenya, further destabilising food security and the livelihoods of people in the east and north of the country. The insects follow spring rains, seeking emerging crops and other vegetation.

Hellen Adoa, a minister at Uganda’s agriculture department, said: “This is very active, destructive and we are worried it has come at the time of lockdown. We are a bit overwhelmed.

“The moment they arrive in a place the first thing they do is to eat anything green. They have destroyed some fields of crops and vegetation,” she said.

Kenyan officials have said coronavirus crackdowns have slowed efforts to fight the infestation, as crossing borders has become harder and pesticide deliveries are held up. Aerial spraying is the only effective means of controlling locusts but there have been complaints that the pesticides are affecting livestock.

In February, eight east African countries experienced the worst outbreak in 70 years, exacerbated by climate change and war in Yemen.

The insects can travel about 90 miles a day and eat their own body weight in crops.

“Heavy rains in late March established favourable breeding conditions for yet another generation of locusts in the Horn of Africa. These will emerge as young swarms in June, just as many farmers start to harvest,” said Antonio Querido of the UN’s food and agriculture agency in Uganda.

“By now, most farmers have planted the first season annual crops. If the locust swarms persist and control operations are not effectively undertaken the food crops will be lost and agriculture-based livelihoods will be impacted upon.

“Immature swarms are the most voracious stage of locust development. They are aggressive feeders and as such can cause a lot of damage to crops and forage.”

Christine Apolot, the chairperson for Uganda’s Kumi district, which was hit by a swarm last week, said people were filled with despair, having already endured flooding and the previous swarm: “This is seriously going to bring food insecurity. It’s the fear we have at hand right now.

“As we were hopeful of to receive some relief food to support the situation on ground, the locust invaded and Covid-19 lockdown is moving towards devastating the economy.

“We expect government, number of partners and World Food Programme to come to our rescue with relief food. Otherwise our people will end with starvation.”