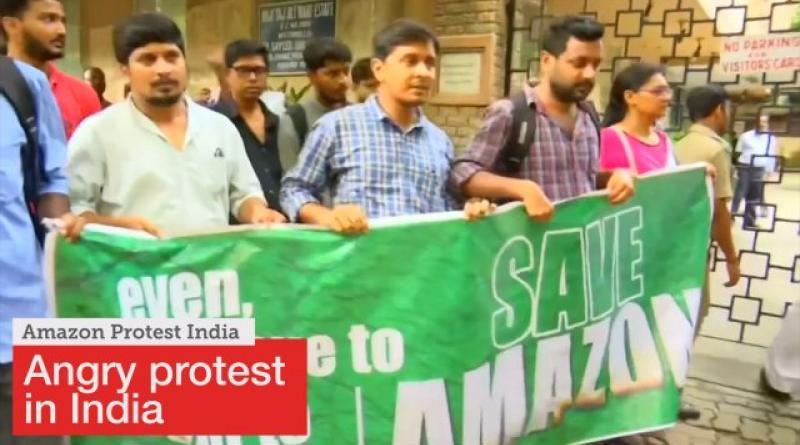 Protesters in India's eastern Kolkata city have staged a demonstration outside the city's Brazilian consulate against President Jair Bolsonaro, demanding protection for the Amazon rainforest.

Dozens of protesters rallied outside the Brazilian consulate in India's eastern Kolkata on Tuesday against President Jair Bolsonaro and demanded protection for the Amazon rainforest.

Demonstrators chanted and waved posters saying: "Save Amazon, Burn Bolsonaro", condemning the Brazilian leader's policies and his response to the Amazon fires.

A record number of fires are ravaging the rainforest, many of them in Brazil, drawing international concern because of the Amazon's importance to the global environment.

Forest fires in the Brazilian Amazon, which accounts for more than half of the world's largest rainforest, have surged in number by 83 per cent this year, according to government data, destroying vast swathes of a vital bulwark against global climate change.

Bolsonaro has attributed the scale of the fires to dryer-than-average weather and insisted on the need for economic development of the Amazon to improve the lives of its 20 million inhabitants.

Environmentalists have warned that his controversial plans for more agriculture and mining in the region will speed up deforestation.

No EU-Brazil trade deal as long as the Amazon is burning.