Rheinmetall is going electric with its new bus, bikes and scooters 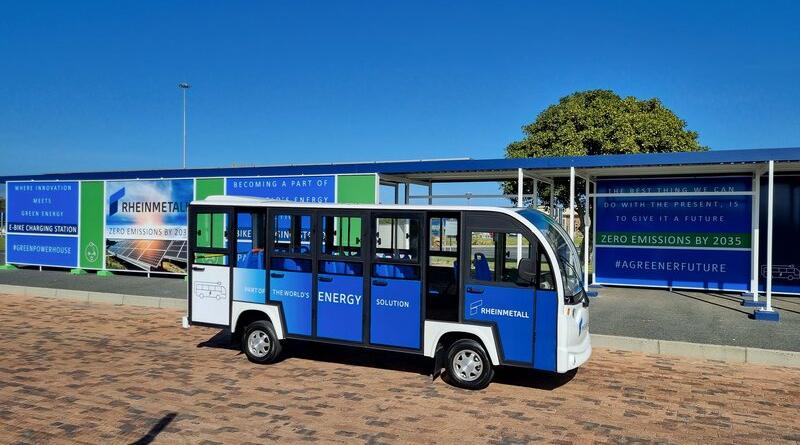 Rheinmetall South Africa is making a start on its plans to become climate neutral by rolling out its new electric bus and off-grid solar power charging stations.

The company has settled on electric transport as a way for it to achieve climate neutrality. The Rheinmetall Group’s South African subsidiary Rheinmetall Denel Munition (RDM) have introduced e-vehicles and off-grid, solar-powered charging stations at the company’s Somerset West location.

Chairman of the Executive Board of Rheinmetall AG, Armin Papperger, explains they are focusing attention on Environmental, Social and Governance goals in their subsidiaries around the world. “All over the Group, we’re committed to taking visible steps that demonstrate our sense of responsibility for the environment and society. The initiative in South Africa is just one example,” said Papperger.

The new vehicles were unveiled by RDM CEO Jan Patrick Helmsen in Somerset West, the company’s main location in South Africa. They will operate there as well at Rheinmetall’s Boskop plant in Potchefstroom.

“As part of the Rheinmetall organisation, which has set itself the goal of being climate neutral by 2035. RDM is supporting this ambitious objective with a master plan that involves implementation of solar energy and green hydrogen, which, along with other projects in the renewable energy domain, are intended to lead to climate neutrality,” said Helmsen.

To kick-start the process of eliminating more than 350 internal combustion engine vehicles from the RDM fleet, the company has introduced the first electrically powered buses at its Somerset West and Boskop plants. Electric cars, new “E-Bakkies” and a new mobility concept based on e-scooters and e-bikes for getting around the plants also form part of the package.

“An important step here is our move away from the internal combustion engine (ICE) in our fleet of vehicles, with a completely new mobility concept at all four RDM locations in South Africa,” declared Helmsen.

The e-scooters and e-bikes will operate along much the same lines as a rent-a-bike system in large European cities and elsewhere, where a bicycle can be booked and picked up at a specific station and then dropped off afterwards at any other charging station. Solar-powered electronic charging stations of this type have been installed at various locations around RDM plants.

RDM’s locations occupy a total of 5,000 hectares, meaning that large distances have to be covered not only between plants but also when onsite. The company already had an app-based system that let employees book a ride in a bus or car from individual locations. This system has now been expanded to include e-scooters and e-bikes. This has resulted in enhanced employee mobility and less impact on the environment

ABB combines illustrious past with future of e-mobility in Davos

Want to turn your bicycle into an e-bike? Here’s just the gizmo