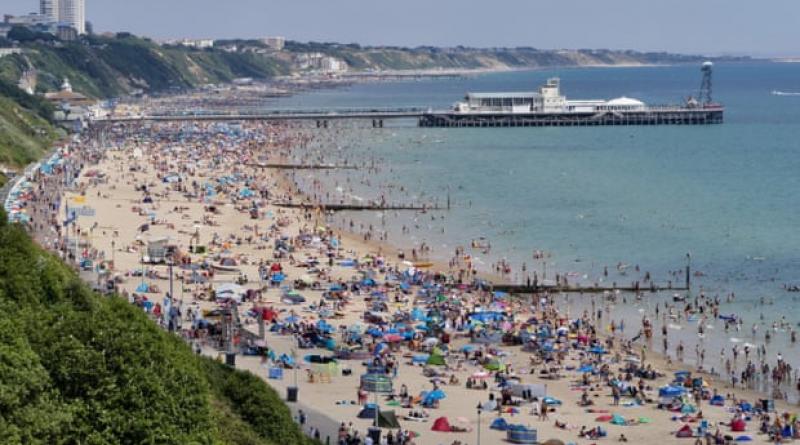 The discharges took place all over England and Wales, including at some of the most popular beaches.

The study by Surfers Against Sewage, which publishes data on sewage releases as they occur, examines the notifications by water companies of effluent discharges over 12 months.

The report says one company, Southern Water, failed to issue notices of when it discharged sewage at a number of popular beaches, leaving the public at risk.

“Their failure to provide this information has put thousands of water users at risk,” the SAS report claimed. It said that more than 20% of reports from swimmers, surfers and paddlers of illness after using the sea came from locations within Southern Water’s catchment. Seven reports came from Hove Lawns beach in Brighton alone.

“These illnesses could have been prevented if discharge notifications had been issued,” the report said.

It estimates that 6% of swimming days were lost in bathing waters in 2020 because of sewage discharges into seas in England and Wales.

Under EU regulations that have rolled over into UK law since Brexit, countries must monitor and assess bathing water for faecal bacteria and inform the public about bathing water quality and beach management through the so-called bathing water profiles – poor, sufficient, good or excellent – or notices banning or advising against bathing.

The discharges into UK bathing waters come from combined sewer overflows (CSOs) – emergency infrastructure designed to release raw sewage and wastewater after extreme rainfall to release pressure in the system.

However the report said: “CSOs are being used outside these rainfall periods, resulting in environmental damage and increased risk to water users.” 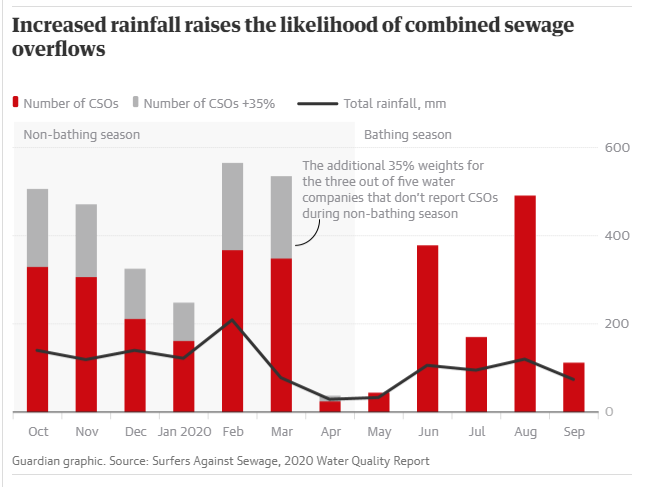 The SAS report presents data collected through its safer seas service – a real-time alert system for sea water users, of pollution releases – and information from the Environment Agency’s pollution risks forecasts, which indicate where there is increased pollution. Eight of the major water companies around the coast of England and Wales voluntarily provide CSO discharge notifications to the alert service.

There were 2,941 notifications of releases of raw sewage into bathing water at beaches stretching from Northumbria to Cornwall in the year to October; comprising 1,195 notifications during the bathing season, 15 May to 30 September, and 1,746 times “out of season”.

Only five companies; Northumbrian, United Utilities, Welsh Water, Wessex and Yorkshire, release information about sewage discharges out of season. Southern, Anglian and South West Water do not notify the public outside the bathing season.

The report estimated that if all the water companies issued notifications of discharges throughout the year, the number would reach 3,434.

The health impact is highlighted in 153 reports of sickness from people using the bathing waters affected in 2020. The worst locations were in Southern Water areas, including at Hove Lawn beach, where water quality is supposed to be “excellent”.

In the south-west, sickness hotspots include at Westward Ho! and the popular surf beach Croyde Bay.

The most common illness experienced was gastroenteritis or infectious diarrhoea, accounting for 64% of submitted reports.

SAS is calling for all water companies release data on sewage discharges all year round, and wants legally binding targets in the forthcoming environment bill to end untreated sewage discharge in all bathing waters by 2030.

“The failure to provide real-time, transparent information all year round therefore presents a risk to human health, with a huge number of water users not having access to information to allow them to stay safe,” the report said.

Some of the worst locations for CSO discharges were Biggar Bank beach on Walney Island in Cumbria, where United Utilities said it discharged raw sewage through CSOs 58 times, Benllech beach in Anglesey, with 51 and Scarborough North Bay beach, 61.

Southern Water issued the fewest notifications at just 78 – compared with 690 in 2019. It said the lack of data was due to technological issues. “Notifications should have been sent, but frustratingly they weren’t,” the company said.

A spokesperson added: “An improved service is being finalised in consultation with stakeholder groups including Surfers Against Sewage.

“The introduction of the system has had teething problems – our software development teams have continued to refine the engineering over the summer.”

The SAS report said: “Our findings … present a worrying and ongoing trend, consistent with other reports of a continued decline in water company performance.

“This is just the tip of the iceberg. Water companies must do more to protect and restore blue environments and fully safeguard the growing number of people who rely on these natural amenities for health, prosperity and wellbeing.”

Philip Dunne MP, chair of the environmental audit committee, said: “This is yet more evidence that untreated sewage continues to be routinely discharged … We need to stop this happening and manage human effluent properly so we do not directly pollute the water we all rely on.

“We must seize the unpleasant truth of information like this and use it to ram home the need to begin the process of widespread improvement of wastewater infrastructure.”

Dunne is attempting to change the law to stop sewage discharges by water companies into inland waters. His private members bill is to be debated in parliament in January.

This week campaigners from SAS and other NGOs will present a 50,000-strong petition to environment secretary George Eustice calling for an end to sewage pollution.

An Environment Agency spokesperson said: “We are working with government, the water industry and environmental groups on a storm overflows taskforce to propose ways to drastically cut the frequency and volumes of sewage discharged into our water courses, and we will not hesitate to take enforcement action against companies found to have damaged the environment.”