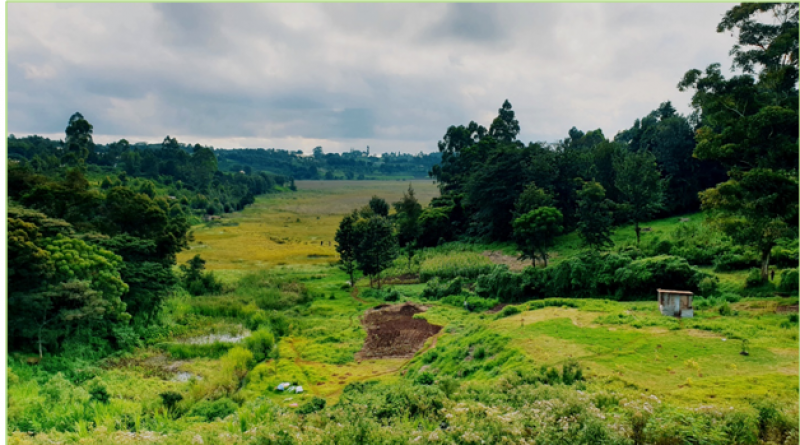 Kenya taking steps to save its swamps.

Are there peatlands in Kenya? Absolutely. One classic example is Ondiri swamp, previously referred to as “old lake”, which is Kenya’s largest known quaking bog.

*Peatland ecosystems have a peat layer at the surface that has accumulated under wet conditions, whereby peat is the surface organic layer of soil consisting of partially decomposed organic material, derived mostly from plants.

This wetland is said to be the source of Nairobi River and Lake Naivasha’s underground water supply.

The Ondiri peat can in specific areas, support the weight of a fully grown human crossing the swamp on logs.

Logs sinking into the Ondiri peat 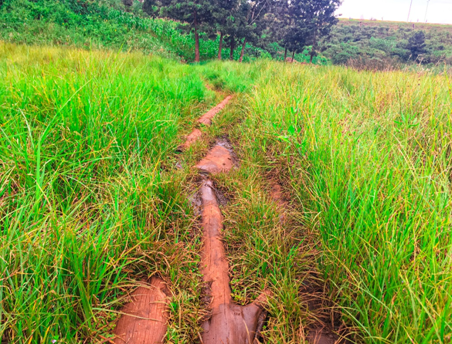 *When water is drained from peatlands, the peat layer, which would in pristine peatlands be inundated, decomposes releasing greenhouse gases into the atmosphere.

In Kenya, numerous local communities that live around peatlands, locally referred to as ‘swamps’, depend on these ecosystems for their livelihoods. Particularly, fertile soils near swamps support farming activities done by the residents for subsistence food production.

There is a general pre-conception that swamps are an inconvenience to humans, that they are dirty, filled with insects, and, therefore, should be drained. Unlike rivers and lakes that are well defined, wetlands, such as swamps, bogs and marshlands are often not seen as significant water resources.

Ondiri Swamp: Then and Now

An old tale is being told in Kenya about how Ondiri swamp developed into a peatland, unlike other swamps in the region. In the past, the local people had named it ‘kahenia’ meaning “shining body of water”. The Maasai and Kikuyu people would come and graze their livestock around the swamp. As Ondiri is located in a depression, the nutrients from the livestock wastes on the nearby slopes would wash or seep into the lake, promoting the growth of an extensive reed mat on the swamp.

Since 2009, the swamp’s fertility and the rapid urbanization of Kikuyu town has attracted investors to initiate agricultural practices around Ondiri. Companies and entrepreneurs built greenhouses and took large volumes of water from the swamp for their irrigation. After using it, the wastewater contaminated with agrochemicals was discharged back into the swamp.

During my undergraduate research in 2017 at Ondiri, I was able to determine that these agricultural activities were altering the water salinity, nutrient levels and ultimately the vegetation composition of the peatland. Specifically, our team discovered that the high nitrogen levels in the water released back to the swamp, led invasive weed species to grow near the greenhouses. This was contrary to undisturbed areas far away from the greenhouses, where we measured lower nitrogen levels in the water that promoted the growth of typical swamp species such as reeds and water grasses.

Environmental action for the swamp

In an attempt to mitigate the environmental challenges facing the wetland namely pollution, water abstraction, overgrazing, and encroachment, The Friends of Ondiri Wetland Kenya (FOWK), had been established in 2016 by David Wakogy. This community-based association aims to promote public participation in the conservation of Ondiri Swamp. The association plants trees, trains local farmers on the best agricultural practices and exchanging with them about the challenges facing the swamp and opportunities the communities have.

Peatland maps including information on the drainage status are important, as they allow decision-makers to avoid their drainage and subsequent losses and greenhouse gases. Kenyan peatlands are largely unmapped, and their status is often unknown.

To support the country’s peatland monitoring efforts, Greifswald Mire Centre has made a peatland probability map for Kenya. The map identified areas of high peat potential countrywide, with Ondiri swamp identified as a probable peatland hotspot. Similarly, the Global Wetlands Map, produced by the Sustainable Wetlands Adaptation and Mitigation Program (SWAMP), has estimated that Kenya might host approximately 88,840 hectares of peatlands. All these efforts would require field sampling to better understand their extent and status.

*According to Greifswald Mire Centre, peatlands cover only 446 million hectares globally. The new global peatland map by (Xu et al. 2019) estimates the peat coverage area as equivalent to 2.84% of the Earth’s land area.

At present, comprehensive information on the location and extent of peatlands located in Africa is unknown. Regionally, efforts are being made by the Global Peatlands Initiative (GPI) partners to map peatlands in the Democratic Republic of Congo and the Republic of Congo, which represents an important step in the right direction.

A glimmer of hope

Recently, further efforts have been taken to preserve the Ondiri ecosystem and its services. A petition presented on July 7, 2020 at the Senate by the Hon. Sen. (Dr.) Isaac Mwaura may just make Ondiri wetland, the first ever peatland to obtain formal protection status in Kenya. The exchange at the senate including information about the petition can be found on YouTube .

The senator presented the petition on behalf of Kikuyu town residents with the support of FOWK. The main objectives of the petition are:

Certainly, the work is not over.  Activities to verify the location and extent of peatlands in East Africa are needed, allowing communities and countries to effectively manage these valuable resources and their services sustainably. Once Kenya has its peatland map, the country will be able to better plan and harmonize its policies to preserve these enigmatic ecosystems.

Africa is Warming Fast, and the Most Vulnerable Are Being Hit Hardest.