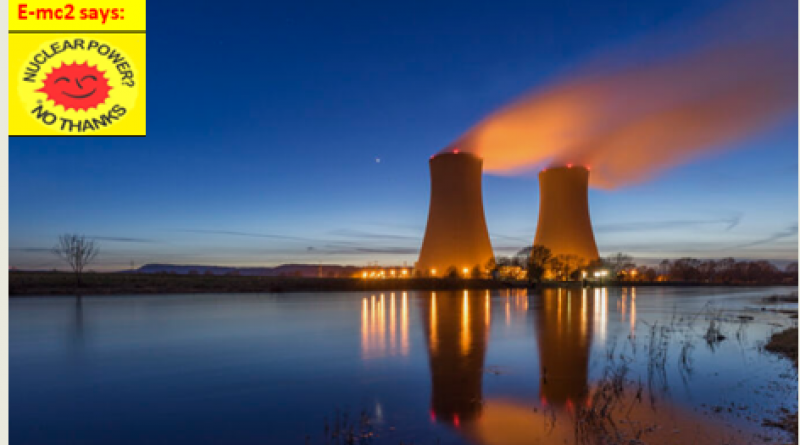 A comprehensive analysis shows that warmer temperatures aren't the only threat.

With extreme weather causing power failures in California and Texas, it's increasingly clear that the existing power infrastructure isn't designed for these new conditions. Past research has shown that nuclear power plants are no exception, with rising temperatures creating cooling problems for them. Now, a comprehensive analysis looking at a broader range of climate events shows that it's not just hot weather that puts these plants at risk—it's the full range of climate disturbances.

Heat has been one of the most direct threats, as higher temperatures mean that the natural cooling sources (rivers, oceans, lakes) are becoming less efficient heat sinks. However, this new analysis shows that hurricanes and typhoons have become the leading causes of nuclear outages, at least in North America and South and East Asia. Precautionary shutdowns for storms are routine, and so this finding is perhaps not so surprising. But other factors—like the clogging of cooling intake pipes by unusually abundant jellyfish populations—are a bit less obvious.

Overall, this latest analysis calculates that the frequency of climate-related nuclear plant outages is almost eight times higher than it was in the 1990s. The analysis also estimates that the global nuclear fleet will lose up to 1.4 percent—about 36 TWh—of its energy production in the next 40 years and up to 2.4 percent, or 61 TWh, by 2081-2100.

The author analyzed publicly available databases from the International Atomic Energy Agency to identify all climate-linked shutdowns (partial and complete) of the world's 408 operational reactors. Unplanned outages are generally very well documented, and available data made it possible to calculate trends in the frequency of outages that were linked to environmental causes over the past 30 years. The author also used more detailed data from the last decade (2010–2019) to provide one of the first analyses of which types of climate events have had the most impact on nuclear power.

While the paper doesn't directly link the reported events to climate change, the findings do show an overall increase in the number of outages due to a range of climate events.

The two main categories of climate disruptions broke down into thermal disruptions (heat, drought, and wildfire) and storms (including hurricanes, typhoons, lightning, and flooding). In the case of heat and drought, the main problem is the lack of cool-enough water—or in the case of drought, enough water at all—to cool the reactor. However, there were also a number of outages due to ecological responses to warmer weather; for example, larger than usual jellyfish populations have blocked the intake pipes on some reactors.

Storms and wildfires, on the other hand, caused a range of problems, including structural damage, precautionary preemptive shutdowns, reduced operations, and employee evacuations. In the timeframe of 2010 to 2019, the leading causes of outages were hurricanes and typhoons in most parts of the world, although heat was still the leading factor in Western Europe (France in particular). While these represented the most frequent causes, the analysis also showed that droughts were the source of the longest disruptions and thus the largest power losses.

The author calculated that the average frequency of climate-linked outages went from 0.2 outages per year in the 1990s to 1.5 outages in the timeframe of 2010 to 2019. A retrospective analysis further showed that, for every 1° C rise in temperature (above the average temperature between 1951 and 1980), the energy output of the global fleet fell about 0.5 percent.

This analysis also shows that climate-associated outages have become the leading cause of disruptions to nuclear power production—other causes of outages have only increased 50 percent in the same timeframe. Projecting into the future, the author calculates that, if no mitigation measures are put into place, the disruptions will continue to increase through the rest of this century.

"All energy technologies, including renewables, will be significantly affected by climate change," writes Professor Jacapo Buongiorno, who was not involved in the study, in an email to Ars. Buongiorno is the Tepco Professor of Nuclear Science and Engineering at the Massachusetts Institute for Technology (MIT), and he co-chaired the MIT study on The Future of Nuclear Energy in a Carbon Constrained World. "The results are not surprising—nuclear plants can experience unplanned outages due to severe events (e.g., hurricanes, tornadoes) or heat waves, the frequency of which is increasing."

Although there is relatively little research on the topic of climate effects on nuclear power specifically, some projects are already underway to adapt nuclear plants to the changing climate. For example, the US Department of Energy recently invested in a project researching methods to reduce the amount of water needed by nuclear facilities (e.g., advanced dry cooling).

"Existing nuclear plants are already among the most resilient assets of our energy infrastructure," writes Buongiorno. "The current fleet is adapting to rising sea levels (for those plants located in areas at potential risk of flood) and the increasing intensity of storms. New nuclear reactor technologies will be even more resilient, as in many instances that are being designed to be dry cooled (i.e., not using river/ocean water for rejecting heat to the ambient) as well as capable of operating in 'island mode,' i.e., disconnected from the grid and ready to restart before other large power plants in the event of a blackout."

Other nuclear technologies, such as pebble-bed, molten salt, and advanced small modulator reactors, may also provide more climate-resistant solutions, but these are all still under development. In general, the strict regulations in place for nuclear reactors make incorporating newer technologies particularly difficult. Even as these technologies become available, it will likely require further reactor downtime to install new components. So, at least in the short term, even nuclear power will likely contribute to the increasing frequency of climate-related power shortages.