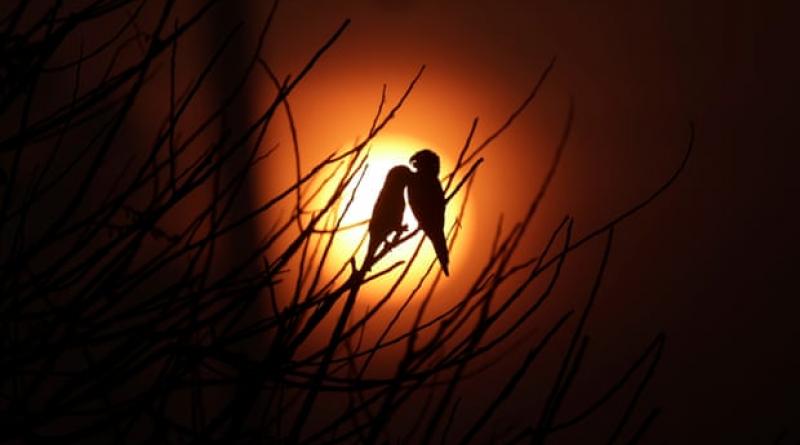 Bird species are in decline even in the remote parts of the Amazon, far from human interference, a study shows.

Scientists have found a sharp decline in nine insect-eating bird species in the lowlands of the central jungle in the space of a few decades. No equivalent decline was found among fruit-eating birds. This, they said, indicated that the climate crisis and its effect on insect populations may be to blame.

The research, published in the journal Ecology Letters, makes use of data collected more than 30 years ago by the conservation biologist Thomas Lovejoy and others to study the impact of deforestation.

At the time, the Brazilian government was encouraging ranchers to turn rainforest into pasture, but requiring them to keep some land intact. Lovejoy and his colleagues convinced some ranchers to leave patches of forest of various sizes inside large clear cuts, isolated from the rest of the forest, in the hope that they would discover how small a fragment of rainforest could support healthy flora and fauna. They used birds – well studied and easy to catch – as a proxy for the animal kingdom.

To survey bird numbers, they unfurled impenetrable “mist nets” made of almost invisible fine polyester fibre, three times as high and 20 times as long as a tennis net. These captured a proportion of birds in flight without harming them. The captives were let loose after being counted, weighed and measured.

Years later, in 2008, Prof Philip Stouffer, of Louisiana State University, the lead author of the new paper, was asked by a birder at Camp 41 why they had not seen any wing-banded antbirds, a bulbous bird with a dramatic turquoise eye ring. Although never common, the bird had previously been seen from time to time. Other birds scientists would have expected to see were also absent.

The forest fragments project had not been designed to measure changes in bird abundance at the control sites but, in an unrelated study, Stouffer and colleagues were already repeating the biggest mist-netting at these sites since the 1980s. This data, they realised, could be used to work out whether the local birds were in decline.

The new paper compared the abundance of 79 species caught between 2008 and 2016 with sampling from the early 1980s. Stouffer said the results surprised him. Nine species had become less common, including eight that were at least 50% less abundant. All but one of the declining bird species were members of two insect-eating groups: near-ground insectivores and terrestrial insectivores. Significantly, according to Stouffer, almost no fruit eaters were declining, with a handful found to be more common in the recent count.

“Something different is going on for birds that forage on arthropods on or near the forest floor,” said Stouffer.

The paper ruled out several explanations for the declines, including hunting, an invasive predator, or some pathogen. Lovejoy, one of the authors of the new paper, said the only other explanation that seemed to make sense was the climate crisis: “There’s no other smoking gun,” he said.

He said the drier and warmer conditions in the central Amazon may either cause direct “physiological stress to birds”, or “structural change to the forest” that reduced food supply or otherwise made the habitat less suitable.

Stuart Pimm, a conservation biologist at Duke University, who was not involved with the new research but had previously collaborated with several of the co-authors, questioned the conclusions, pointing out that the current sampling sites were close to, but not exactly the same as, the original areas. “They can’t be sure that there aren’t some differences in the natural history of these two sets of sites that might explain the results,” he said.

However, Stouffer said he believed it was fair to compare the two datasets. “It would become really difficult to find the [original] plots,” he said. He said some of the original research camps had been swallowed up by jungle, and the precise locations from the era before GPS had been lost.

In any event, he said, the natural evolution of the forest, such as normal tree falls that open up clearings or new trees that close them, constantly changed the suitability of any given location. “We are deceiving ourselves if we think the ‘forest’ is the same 35 years later,” he said.

Vitek Jirinec, a PhD candidate at Louisiana State University and second author of the paper, said: “This is the best we have to show what happened to the forest community of birds.”

Since 2017 he has been strapping miniature data loggers to birds to monitor them during the hottest hours of day, which has shed more light on the subject. This, he said, hinted at their response to a hotter climate.

While the data has not yet been published, Jirinec said it did not look good for the birds of the forest. “Climate change is making the forest less suitable for these species,” he said.

RSPB flooded with reports of birds of prey being killed.

Hundreds of Thousands of Migratory Birds 'Falling Out of the Sky' in the Southwest.