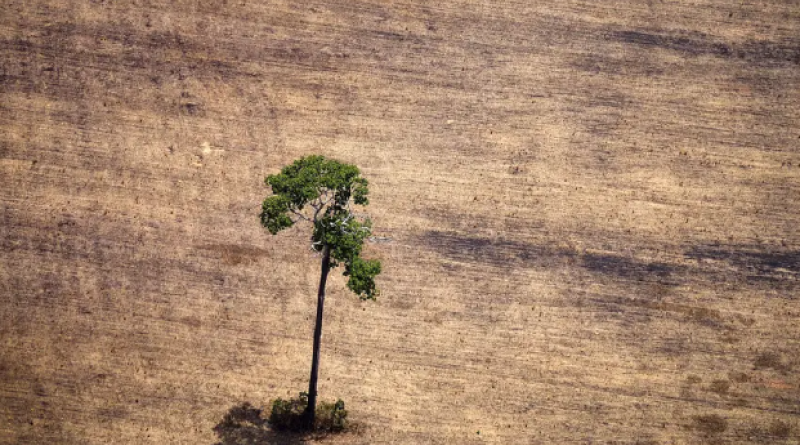 Lord Goldsmith said the new rule would ‘tackle deforestation’, but environmental campaigners warned it does not go far enough

The UK government is set to introduce a new law to stop businesses from using commodities linked to illegal deforestation.

A rule to be brought in under the new environment bill on 11 November will require UK firms to use commodities that have been produced “in line with local laws protecting forests and other ecosystems”.

The law will mean businesses will need to be more transparent about where they source their products from, the government says.

However, environmental campaigners say the new rule does not go far enough because it only covers products linked to illegal deforestation rather than all types of deforestation.

Around one-quarter of all of the carbon stored on land can be found in tropical forests, making these biodiverse ecosystems key to tackling the climate crisis.

However, rampant deforestation – sometimes linked to the production of food and products enjoyed in the UK – is causing this carbon to be released into the atmosphere. Tropical deforestation currently accounts for around 8 per cent of all human-caused carbon emissions.

The government says that “50 per cent of all recent tropical deforestation was caused by illegal deforestation for commercial agriculture and timber plantations” and that the new rules would lead the way in tackling this kind of forest loss.

Announcing the new law, the UK’s international environment minister, Lord Goldsmith, said: “In every conceivable way we depend on the natural world around us. Rainforests cool the planet, provide clean air and water, and are a haven for some of the most endangered species on Earth – and so protecting them must be a core priority.

“Our new ‘due diligence’ law is one piece of a much bigger package of measures that we are putting in place to tackle deforestation. Our intent is not just to take world-leading domestic measures, but to build a global alliance of countries committed to working together to protect the world’s precious forests.”

The measures will help the UK lead the way in encouraging other countries to ramp up their protection of rainforests at the upcoming UN climate talks, known as Cop26, to be held in Glasgow next year, the government says.

However, the new law falls short by not outlawing commodities linked to legal deforestation, Pat Venditti, campaigns director at Greenpeace UK, said: “After a decade of failed voluntary commitments by UK companies, this should be a line in the sand moment for the government. But today’s announcement will do almost nothing to advance the global fight against deforestation.

“For this new law to be fit for purpose, all deforestation, not just deforestation deemed ‘illegal’ should be ruled out. And stronger sanctions should be imposed, such as bans on products entering the market if they cannot be proved to be free from deforestation and human rights abuses throughout the entire supply chain.”

The new law does not take into account that some countries have “weak local laws” on tropical deforestation, says Kierra Box, campaigner at Friends of the Earth.

“This new government proposal simply asks UK businesses to follow local laws relating to deforestation in the countries where they operate, no matter how weak those laws are, or how poorly enforced,” she said.

“This isn’t the world-leading proposal to protect and restore forests that we need. Nor is it a tough plan to safeguard these important ecosystems and fight the climate emergency. Asking businesses to obey the law is not world-leading, it is just the very least we should be able to expect from them.”

The new measures come after the government held a consultation on reducing deforestation in UK supply chains from August to October of this year.

On the last day of the consultation, a group of 21 food companies, including McDonalds, Tesco and Lidl, wrote to the government to urge them to pursue the toughest measures in tackling deforestation linked to commodities.

The letter said: “Restricting action to illegal deforestation would not achieve halting the loss of natural ecosystems, especially when governments have discretion to decide what is legal.”

Commenting on the announcement of the law today, Jason Tarry, CEO of Tesco UK and Ireland, said: “We welcome these new measures as an important first step towards creating a level playing field in the UK, aligned with Tesco’s goal of zero deforestation. We hope this encourages all businesses to do the right thing.”

This startup is using geo-tagging and blockchain to fight deforestation in Africa.