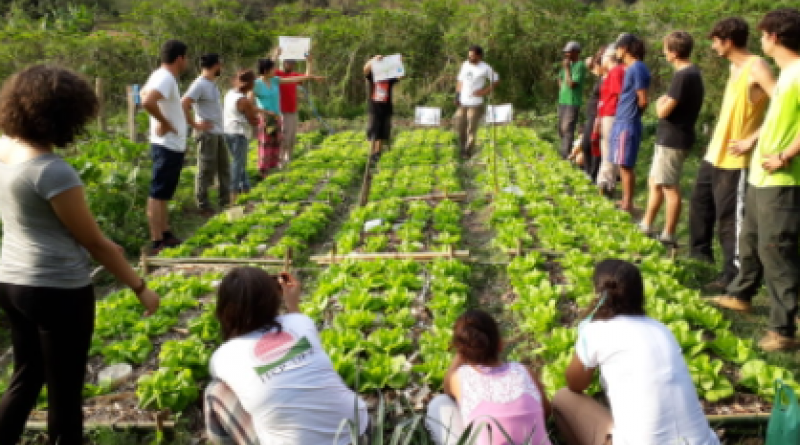 Ahead of the UN Food Systems Summit starting today (September 23), Christian Aid have published a report highlighting the damage that conventional farming is doing to the climate and soil systems upon which humanity relies.

The report highlights how an increasingly intensive food system based on the use of synthetic chemical inputs such as fertilisers and pesticides has driven up emissions, degraded soils and is the main driver of biodiversity loss.

Despite the claims of the chemical industry that they are essential to higher yields and food security, in fact the opposite is true with agroecological approaches such as organic farming and agroforestry increasing productivity and resilience, reducing emissions and drawing carbon back into soils and trees more effectively than any alternative

The report’s findings include:

The report shows that widespread adoption of agroecology would see huge benefits to soil health, water usage, climate change and increased yields and profit to farmers.  Agroecology encompasses a wide variety of farming systems with an emphasis on diversity, locally-led and adapted approaches to harness much greater resilience.  Rather than relying on expensive chemical inputs which damage soil and water leading to diminishing returns, it focusses on both farmer and scientific knowledge and harnesses natural processes to bring sustainability to the food system.

Studies clearly show the enhanced resilience, productivity and profitability of these sustainable agroecological practices when compared to conventional, chemical agriculture. A huge study which analysed 286 interventions introducing more sustainable and resource conserving practices across 57 countries, covering 37 million hectares (3% of the cultivated area in developing countries), found increased productivity on 12.6 million farms, while also improving the supply of critical environmental services. The average crop yield increase was 79% and all crops showed water use efficiency gains, with the highest improvements in the rain-fed crops that most poor small-scale farmers rely on.

A growing range of subsequent studies have shown productivity improvements of 5-120% as farmers adopt more agroecological methods, and they recover faster after severe shocks, such as cyclones and droughts

These findings were echoed in a UN report which found organic and near-organic methods and technologies in Africa delivered increases in productivity per hectare of food crops. This, it concluded, “challenges the popular myth that organic agriculture cannot increase agricultural productivity.”

In Paraguay, crop yields under conventional tillage which damages soil declined by 5 to 15% over a 10-year period, while yields using agroecology methods increased by the same amount. In the latter cases, fertilizer and herbicide inputs dropped by an average of 30 to 50% as improved soil and plant conditions led to reduced disease vulnerability and a greater diversity of pest predators, while crop rotations mitigated the build-up of insect pest species.

Agroecology methods have also proved to be more resilient in the face of climate change.  An assessment of small-scale farmers adopting agroecological methods such as conservation agriculture across Sub-Saharan Africa showed that relative yield performance improved with increasing drought severity and exposure to high temperatures, both of which are set to intensify.

“Some portray agroecology and organic food as a middle-class preoccupation but why should healthy, safe nutrition that doesn’t degrade the climate and environment be a privilege for the wealthy? For vulnerable farmers, especially small-scale farmers in developing countries already facing more extreme weather, it’s the smartest, most resilient and profitable solution. Far from being an optional extra, agroecology is an essential part in the fight against climate change, for improved land and water management and to enhance vital carbon sinks”

“Agricultural intensification has failed to yield the much waited-for results of transforming productivity to increase food and nutrition security for the poorest. Two decades down the line and the environment is in a worse state in terms of poorer soils, monoculture cropping and contaminated water sources, to mention just a few. It is no longer negotiable that for humanity to survive, food systems must be in harmony with nature.”

“Despite the clear benefits, agroecology receives only 1% of global agricultural research funding.  This needs to be ramped up and made a policy priority for Governments beginning this week at the UN Food System Summit.

“For there to be any chance of reaching zero net emissions by 2050 and ensuring global food security, the food system needs to be transformed to agroecology with at least the same speed and urgency as the transition from fossil fuels to renewable energy. The $700 billion in annual agricultural subsidies and the 99% of research funding that overwhelmingly supports conventional chemical agriculture needs to be completely reoriented to this goal. The UNFSS and any processes it initiates need to be completely focused on supporting this transformation.”

Agness Machona a farmer in Zimbabwe, has participated in training to help her adopt agroecology for crop and livestock production.  She also now leads a group of 41 wild food collectors, adhering to organic standards requiring good environmental management practices and grows high-value organic crops such as rosella and Kalahari melon.  She said: “I was taught to be self-sufficient by the project and am now resilient since I can withstand any shock and stress. Before the program we had shortage of water as a result of severe droughts. People in the community are having better livelihoods as they are both socially and economically resilient”.

Senthamilselvi is the founder of Sathuragiri Kanakam a charity that works in the village of Akkanapuram in India encouraging agroecology. He said:  ‘I’m promoting an alternative livelihood. If they (Dalit women) weren’t here, they’d be working in matchsticks or fireworks factories or as farm labourers on chemical farms. Here they learn everything about all the organic farming processes, so they can be self-sufficient.”

There are a whole host of health issues caused by chemical pesticides and fertilisers. Women suffer from uterus problems, breast problems, poisoned breast milk, sickness and vomiting, sores on their hands and feet.

He continued: “No mother wants to give poison to her child. Our work is to help people understand that chemical farming is poisoning them. Only women can understand and change this. Organic farming is sustainable, that’s why I am doing it, so we don’t need to rely on anyone else, we can be self-sufficient”.

G Parvathy, aged 48, lives in Akkanapuram village. Both she and her husband worked as agriculture labourers, earning a daily wage of just 150 rupees to support their family - they started with a small land area with support from Christian Aid’s EcoVeg project. They work as a team of women and cultivate organic vegetables, preparing organic inputs with locally available natural ingredients. She said:

“Our vegetables and flowers are better than you can buy elsewhere. Previously we had no idea about business or organic farming skills. Women have no rights to land in India and they don’t manage the money, even when they earn it. As a women’s group, we are working together to build a business”.