‘Negotiating with your worst enemy’: Biden in risky talks to pay Brazil to save Amazon. 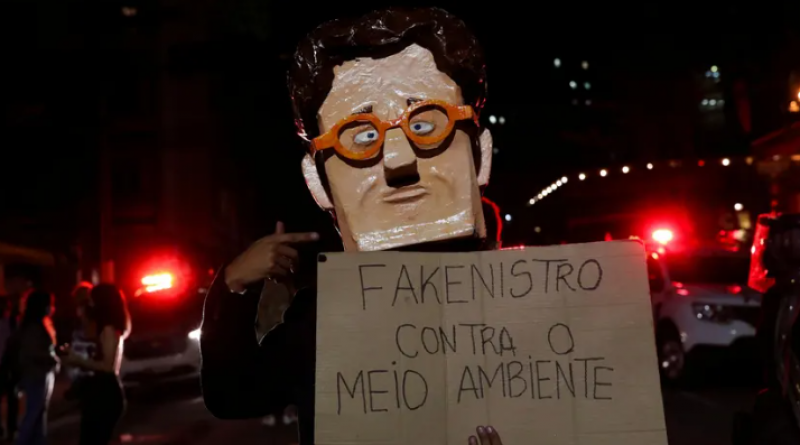 The US is negotiating a multi-billion dollar climate deal with Brazil that observers fear could help the reelection of president Jair Bolsonaro and reward illegal forest clearance in the Amazon.

That is the concern of indigenous groups, environmental campaigners and civil society activists, who say they are being shut out of the most important talks on the future of the rainforest since at least 1992.

Senior US officials are holding weekly online meetings about the Amazon before a series of big international conferences. Ministers and ambassadors from Britain and Europe are also involved. But rather than those who know forest protection best, their Brazilian interlocutor is Bolsonaro’s environment minister, Ricardo Salles, who has overseen the worst deforestation in more than a decade.

Salles is asking for a billion dollars every 12 months in return for which, he says, forest clearance would be reduced by 30-40%. Without the extra foreign cash, he says Brazil will not be able to commit to a reduction target.

Only a third of the money would go directly to forest protection, with the rest being spent on “economic development” to provide alternative livelihoods for those who rely on logging, mining or agriculture in the Amazon. This has prompted worries that Salles will channel cash to the strongly Bolsonarist constituency of farmers and land-grabbers, rewarding them for invading, stealing and burning forest.

On Tuesday, a group of 199 civil society groups published a joint letter to the US administration saying any deal with the Brazilian government was tantamount to appeasement. “It is not reasonable to expect the solutions for the Amazon and its people will come from negotiations made behind closed doors with your worst enemy,” said the letter. “The Bolsonaro government tries at all costs to legalise the exploitation of the Amazon, causing irreversible damage to our territories, peoples and to life on the planet.”

Scientists say international action is long overdue on the world’s biggest tropical forest. The Amazon is essential for climate stability, but human activity is turning the region into a source – rather than a sink – of atmospheric carbon. Some areas are close to a tipping point where the forest shrinks, dries and irreversibly degrades into a savannah.

The coming months ought to be the best opportunity to reverse this in many years. The US president, Joe Biden, has invited world leaders to a climate summit in Washington on 22 April, having promised $20bn for tropical rainforests during his election campaign. Later in the year, the UK will stage Cop26, the most important UN climate conference since Paris, in Glasgow. In between, world leaders are due to meet in Kunming, China to set biodiversity targets for the next 10 years.

But there can be no solution without the Amazon, which means anyone seeking progress has to deal with Bolsonaro and his ministers, despite their nationalist, anti-science and anti-environment policies.

“Brazil is too important to keep off the negotiating table,” said one insider familiar with the talks. “Many in civil society say ‘don’t deal with the Brazilian government’. But the US says they have to deal with elected leaders because they can’t put off the deforestation discussion for two or more years.”

This is a risk for Biden, who is on the verge of doing what Trump never did: give cash to a Brazilian president who has eviscerated forest protection agencies, lethally mismanaged the Covid crisis, and is seen as a danger not only to Brazil, but the world.

Izabella Teixeira, the former Brazilian environment minister, said the US and the UK were poised to pay off a government that is holding the planet to ransom. “They have to offer money to Bolsonaro’s government so he doesn’t block the Cop meetings,” said Teixeira, who represented Brazil in several international conferences during the administrations of Dilma Rousseff.

She said Salles’ focus on carbon markets and payments for ecosystem services have support among the more conservative wing of the agribusiness sector, and they could generate cash for a reinvented version of the Bolsa Verde social benefits programme in the Amazon and elsewhere. This money and the prestige of an international deal could provide a political lifeline for Bolsonaro, whose popularity is slumping. In recent months, the president has lost or fired his justice minister, foreign minister, defence minister and the commanders of all three armed forces.

Salles, a Bolsonaro confidant, is leading negotiations and tweeting screenshots of his virtual meetings with the US team, led by Jonathan Pershing, and the UK’s Cop26 chairperson, Alok Sharma. Among other proposals, he is looking for more foreign backing for a scheme that encourages corporate adoption of national parks, greater use of carbon credits, and ecosystem service payments to farmers for maintenance of forests and tree planting.

But Salles, who became environment minister in 2019, has no credibility with those who defend the forest. He has tried to monetise the region and promoted mining and agribusiness, and under his watch the rulebook for Amazon protection, which reduced deforestation by 80%, has been shelved, monitoring agencies have been eviscerated, 15,000 sq km of forest have been cleared, and Brazil has backtracked on its international commitment to cut carbon emissions.

Salles already has access to substantial international funds. About $3bn from Norway and Germany sits idle in the Amazon Fund, which was frozen by the environment minister because he disliked the strict conditions on deforestation that came with it. This raises questions about what any new funds would be used for, and by whom.

Campaigners and academics say any deal should involve payments for results, money should be channelled through state governors rather than the federal government, it should not reward landowners simply for obeying the law, and resources for enforcement should be in the form of specialist environmental rangers, rather than recruits for the pro-Bolsonaro police force.

They want Brazil to provide a detailed plan to reach zero deforestation. Most important, they say, is that distribution of funds should focus on protecting existing old-growth forests in indigenous territories rather than new plantations on land cleared by farmers. An effective deal, they argue, would need to involve traditional forest communities, who have proved to be the best guardians of the environment.

Sources close to the talks say if there is no bilateral deal with Brazil by April, then the US is likely to make a strong but broad statement of support for tropical forests worldwide. This would be a carrot to encourage Amazon nations to compete for funds with quantifiable reductions of deforestation. Brazil could lose out to its neighbours Colombia, Bolivia or Peru.

This is part of a coordinated diplomatic push. A group of five ambassadors from the US, UK, Germany, Norway and the EU have recently met Salles and other senior ministers to press home the message that Amazon policies have to change and deforestation has to slow if Brazil is to strike a deal and lose its damaging international reputation as an environmental vandal.

Time pressures could weaken resolve. Biden wants a success to announce at his climate summit later this month and the UK will be looking for progress at Cop26 in November. Environmentalists fear a rushed deal with an insincere negotiating partner could be worse than no agreement. Unless payments are tightly pegged to emissions-reduction results, they could be frittered away on dubious carbon credits, vague development plans, benefits to land-grabbers and a huge new greenwashing system for fossil-fuel companies.

The way to avoid this, they say, is to make talks transparent and publicly invite involvement by civil society. Currently, Bolsonaro is the only Brazilian participant invited to Biden’s climate summit, which sends a worrying signal to those who have long fought for forest protection.

“Brazil is today a divided country. On the one hand, there are indigenous people, quilombolas [descendants of afro-Brazilian slaves], scientists, environmentalists and people who work against deforestation and for life,” said Marcio Astrini, executive secretary of the Brazilian Climate Observatory, a network of 50 civil society organisations. “On the other, there is the Bolsonaro government, which threatens human rights, democracy and puts the Amazon at risk. Biden needs to choose which side he will stand on.”

Building a green economy could stop ‘nightmare’ degradation of Amazon.