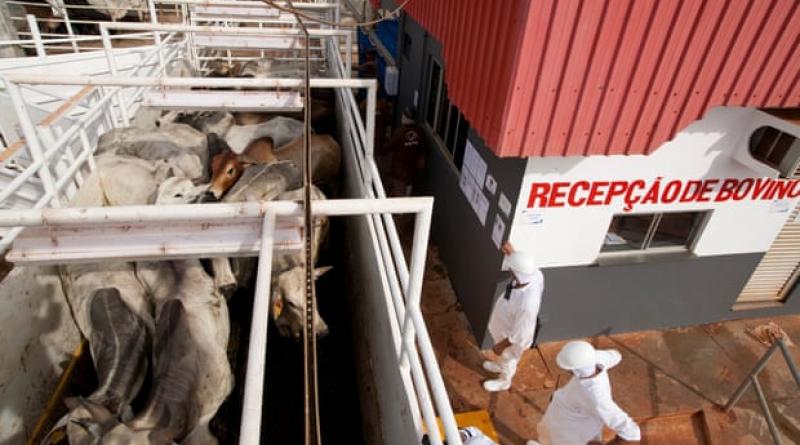 Three international meat companies have indirectly sourced cattle from farms that deforested a unique, protected Amazon reserve, a new report from Greenpeace has found – and two of them later sold meat from the area to the UK.

The revelations come as the Brazil-based companies involved, JBS, Marfrig and Minerva, are under increasing pressure to come clean about their Amazon supply chains. They are now known to have broken commitments made to Greenpeace and Brazilian federal prosecutors  more than a decade ago.

All three companies bought cattle from a farm outside the Sierra Ricardo Franco park that had sourced livestock from two farms inside it. One man is the owner or part owner of all three farms and was charged with environmental crimes inside the 159,000-hectare reserve on Brazil’s border with Bolivia, in the state of Mato Grosso. In 2017, JBS told the Observer it had suspended cattle purchases from the park after a request from prosecutors.

“This is how meat packers continue contributing to the destruction of the Amazon,” said Cristiane Mazzetti, a Greenpeace campaigner who co-authored the report.

Serra Ricardo Franco  was created by the state of Mato Grosso in 1997. “This is a region with great riches in terms of biodiversity that should be protected,” Mazzetti said.

But the state never properly implemented the park and has no management plan for it in place. “There was no effective protection and this allowed invasion and deforestation,” said Samuel Costa, a Mato Grosso state prosecutor. In 2015, prosecutors began legal actions to force the state to protect the park.

The Greenpeace report cites three farms in Sierra Ricardo Franco – Paredão I, Paredão II and Cachoeira – that prosecutors say were cleared after the park was created. Thousands of hectares were illegally deforested.

The Cachoeira and Paredão farms are co-owned by Marcos Tozzatti and a company he controls. Cachoeira and one of the Paredão farms are also part-owned by a company where Eliseu Padilha – a former cabinet minister – is a partner. Tozzatti has been charged with environmental crimes including clearing hundreds of hectares of forest on Paredão. After being ordered to cease agricultural activity, he more than doubled the size of his herd.

He and other farmers inside the park have challenged its protected status and have won a court ruling allowing them to continue operations until a final decision is taken – but prosecutors are appealing the ruling. “In the prosecutors’ office view, any deforestation inside the area is illegal,” Costa said.

The lawyer representing Tozzatti and Padilha did not respond to emailed questions.

Greenpeace found that the Paredão farms sent 4,000 cattle to the Barra Mansa farm outside the park, which is also registered to Tozzatti, between April 2018 and June 2019. In 2018 and 2019, the JBS, Minerva and Marfrig plants near the park bought thousands of head of cattle from the Barra Mansa farm. The JBS and Minerva plants exported nearly 50,000 tons of beef products, some of which went to European countries including the UK, the report found. Marfrig exported around 5,000 tons to countries including Hong Kong and Egypt.

Brazil’s meat giants say they struggle to monitor so-called “indirect suppliers” – farms that sell cattle to other farms which are then sold on to their slaughterhouses – despite promising to do so in agreements signed in 2009 with federal prosecutors and Greenpeace. Greenpeace abandoned its deal in 2017.

The companies said they have invested heavily in independently audited monitoring systems and are working to control indirect suppliers.

“JBS takes a zero-tolerance approach to deforestation in its supply chain,” JBS said. The company said Barra Mansa was JBS-compliant for the period cited in the report.

From 1 July, JBS will bring in a new “theoretical index” which uses a farm’s productivity to calculate if it is suspected of cattle laundering, and now checks supplier farms against areas embargoed by Brazil’s federal environment agency, Ibama, using geomonitoring. “These innovations are expected to make a significant impact in reducing cases of cattle laundering across the beef industry,” it said.

Marfrig said that the Barra Mansa farm was a registered supplier and that from July 2018 to July 2019 its plant had slaughtered 180 cattle Tozzatti supplied. “Marfrig is aware there is a challenge to be faced in obtaining information on these indirect suppliers,” it said in a statement, highlighting its RFI (request for information) system under which farmers supply information on their suppliers.