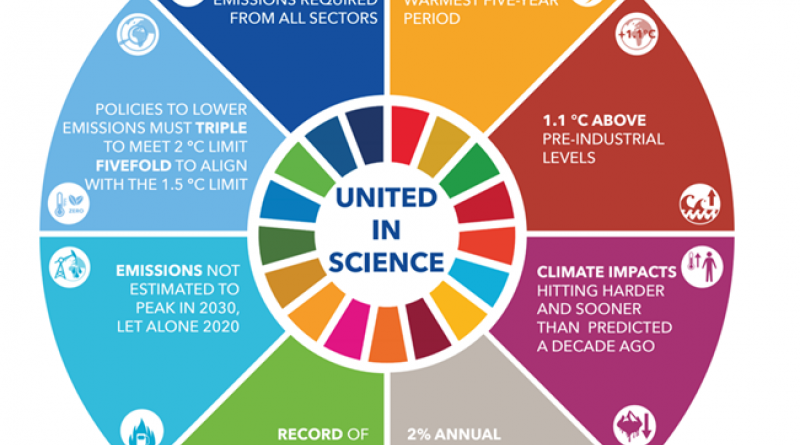 The report, United in Science, includes details on the state of the climate and presents trends in the emissions and atmospheric concentrations of the main greenhouse gases. It highlights the urgency of fundamental socio-economic transformation in key sectors such as land use and energy in order to avert dangerous global temperature increase with potentially irreversible impacts. It also examines tools to support both mitigation and adaptation.

“The Report provides a unified assessment of the state of our Earth system under the increasing influence of anthropogenic climate change, of humanity’s response thus far and of the far-reaching changes that science projects for our global climate in the future. The scientific data and findings presented in the report represent the very latest authoritative information on these topics,” said the Science Advisory Group to the UN Secretary-General’s Climate Action Summit.

“It highlights the urgent need for the development of concrete actions that halt global warming and the worst effects of climate change.”

The Science Advisory Group is co-chaired by WMO Secretary-General Petteri Taalas and Leena Srivastava, former Vice Chancellor of TERI School of Advanced Studies. It comprises highly recognized and respected natural and social scientists, with expertise in different aspects of climate change, including on mitigation and adaptation.

The report, which was coordinated by the World Meteorological Organization, aims to present a “transparent envelope” of authoritative and actionable cutting-edge science.

The synthesis report consists of short summaries from contributing agencies: the World
Meteorological Organization (WMO), Global Atmosphere Watch, the United Nations Environment Programme (UNEP), Global Carbon Project, the Intergovernmental Panel on Climate Change (IPCC), Future Earth, Earth League and the Global Framework for Climate Services. The synthesis is complemented by longer, individual reports, presented as a package to a high-level science event on 22 September and then to world leaders at the Climate Action Summit on 23 September.

"Now, I believe in science. I believe in what has been considered . . . the most valid scientific position today,” said UN Secretary-General Antonio Guterres.

“And that is the reason why I'm convening a climate summit in New York in September, and that is the reason why I will be appealing to leaders in relation to a much stronger commitment of their countries for climate action . . . in order to make sure that we are able to abide by what the scientific community is telling us is absolutely essential to rescue the planet,” said the UN Secretary-General in remarks to the G20 meeting in Osaka, Japan, in June 2019 and reiterated in the synthesis report.

“Our ambitions to reverse the global climate emergency are backed by solid science and data. What we need more than ever is to see bold policy action and further investment and research into cleaner, greener energy. This will ensure we are able to roll back emissions,” said Inger Andersen, UNEP Executive Director.

Highlights from the report include:

The average global temperature for 2015–2019 is on track to be the warmest of any equivalent period on record. It is currently estimated to be 1.1°Celsius (± 0.1°C) above pre-industrial (1850–1900) times. Widespread and long-lasting heatwaves, record-breaking fires and other devastating events such as tropical cyclones, floods and drought have had major impacts on socio-economic development and the environment.

Overall, the amount of ice lost annually from the Antarctic ice sheet increased at least six-fold between 1979 and 2017.  Glacier mass loss for 2015-2019 is the highest for any five-year period on record.

The observed rate of global mean sea-level rise accelerated from 3.04 millimeters per year (mm/yr) during the period 1997–2006 to approximately 4mm/yr during the period 2007–2016. This is due to the increased rate of ocean warming and melting of the Greenland and West Antarctica ice sheets. There has been an overall increase of 26% in ocean acidity since the beginning of the industrial era.

Carbon dioxide emissions grew 2% and reached a record high of 37 billion tonnes of CO2 in 2018. There is still no sign of a peak in global emissions, even though they are growing slower than the global economy.

Current economic and energy trends suggest that emissions will be at least as high in 2019 as in 2018. Global GDP is expected to grow at 3.2% in 2019, and if the global economy decarbonized at the same rate as in the last 10 years, that would still lead to an increase in global emissions.

The net-zero emissions needed to stabilize the climate requires both an acceleration in use of of non-carbon energy sources and a rapid decline in the global share of fossil fuels in the energy mix. This dual requirement illustrates the scale of the challenge.

Natural CO2 sinks, such as vegetation and oceans, which remove about half of all emissions from human activities, but are becoming less efficient at doing so. This underscores the need to reduce deforestation and expand natural CO2 sinks, particularly those in forests and soils that can be improved by better management and habitat restoration.

Emissions gap – where we are and where we need to be

The emissions gap in 2030 between emission levels under full implementation of conditional Nationally Determined Contributions (NDCs) and levels consistent with least-cost pathways to the 2°C target is 13 GtCO2e.

The current NDCs are estimated to lower global emissions in 2030 by up to 6 GtCO2e compared to a continuation of current policies. This level of ambition needs to be roughly tripled to be aligned with the 2°C limit and increased around fivefold to align with the 1.5°C limit.

Implementing unconditional NDCs, and assuming that climate action continues consistently throughout the twenty-first century, would lead to a global mean temperature rise between 2.9 °C and 3.4°C by 2100 relative to pre-industrial levels.

If NDC ambitions are not increased immediately and backed up by action, exceeding the 1.5°C goal can no longer be avoided. If the emissions gap is not closed by 2030, it is very plausible that the goal of a well-below 2°C temperature increase is also out of reach.

A substantial part of the technical potential can be realized through scaling up and replicating existing, well-proven policies – such as switching to renewable energy and reforestation -  that simultaneously contribute to key sustainable development goals.

Three IPCC Special Reports released in 2018 and 2019 assess complementary and specific aspects of climate change, ahead of the Sixth Assessment Report.

The Special Report on Global Warming of 1.5°C states that limiting warming to 1.5 ºC is not physically impossible but would require unprecedented transitions in all aspects of society. There are clear benefits to keeping warming to 1.5 ºC compared to 2 ºC or higher. Every bit of warming matters.

Limiting warming to 1.5 ºC can go hand in hand with reaching other world goals such as achieving sustainable development and eradicating poverty.

The  Special Report on Climate Change and Land stressed that land is already under growing human pressure and climate change is adding to these pressures. At the same time, keeping global warming to well below 2ºC can be achieved only by reducing greenhouse gas emissions from all sectors including land and food.

The report shows that better land management can contribute to tackling climate change, but is not the only solution. Reducing greenhouse gas emissions from all sectors is essential if global warming is to be kept to well below 2ºC, if not 1.5°C.

On 25 September 2019, the IPCC is due to release the Special Report on the Ocean and Cryosphere in a Changing Climate.

Consolidated evidence reinforces human influence as the dominant cause of changes to the Earth system, in a new geological epoch, the Anthropocene.

Growing climate impacts increase the risks of crossing critical tipping points. These refer to thresholds that, if crossed, lead to far-reaching, in some cases abrupt and/or irreversible changes.

There is a growing recognition that climate impacts are hitting harder and sooner than climate assessments indicated even a decade ago.

As climate change intensifies, cities are particularly vulnerable to impacts such as heat stress and can play a key role in reducing emissions locally and globally.

Strategies for mitigation and for upscaling adaptive risk management are necessary going forward. Neither is adequate in isolation given the pace of climate change and magnitude of its impacts.

Only immediate and all-inclusive action encompassing: deep de-carbonization complemented by ambitious policy measures, protection and enhancement of carbon sinks and biodiversity, and efforts to remove CO2 from the atmosphere, will enable us to meet the Paris Agreement.

Members of the Science Advisory Group are

The synthesis report has been compiled by the World Meteorological Organization under the auspices of the Science Advisory Group of the UN Climate Action Summit 2019, to bring together the latest climate science related updates from a group of key global partner organizations - The World Meteorological Organization (WMO), UN Environment, Intergovernmental Panel on Climate Change (IPCC), Global Carbon Project, Future Earth, Earth League and the Global Framework for Climate Services (GFCS).The content of each chapter of this report is attributable to published information from the respective organizations.