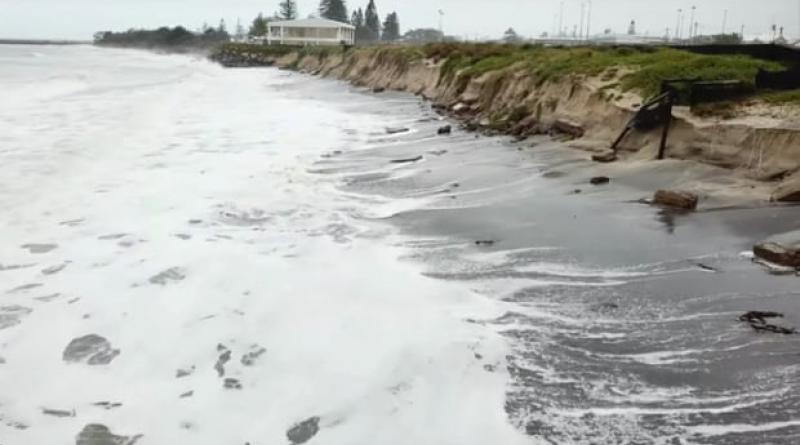 Manmade sea walls and the effects of climate change eating away at Stockton beach, and locals are rallying to save it.

Noel Burns started work on Stockton beach as a council lifeguard in 1971 and spent 37 years with his eyes fixed on the surf and the sand.

“Mate, I’m broken-hearted,” says the 70-year-old. “It’s terrible what it looks like now. They have been studying this [erosion] for 20 years but nothing is getting done. Everyone is getting angry now.”

Stockton beach in New South Wales is being washed away by dramatic coastal erosion which has already claimed a childcare centre, and the community is now demanding emergency action from the state government.

The childcare centre, supporting 72 children, was forced to permanently close on 3 September and the Stockton Surf Life Saving Club – once a 150-metre run for Noel Burns across the sand from the waves – now has water regularly crashing at its rock wall.

In June last year, erosion exposed a dump site containing asbestos that made its way onto the sands. There have also been temporary closures of cabins at a caravan park, although they have been reopened.

Surf competitions that used to be held at the front of the surf club are now relocating several kilometres away.

A GoFundMe crowdfunding campaign has raised more than $16,000 since it was launched a week ago. Last Sunday, more than 500 residents attended a rally at a safe end of the beach, which now has only one safe access point. Locals say the erosion has been getting worse over the past 20 years.

The NSW local government minister, Shelley Hancock, has vowed to visit the community “in the coming days”.

Callan Nickerson, the president of the 112-year-old Stockton Surf Life Saving Club, said the beach was the heart and soul of the community.

“People used to come home from work and kick off their shoes and get straight down there to put their feet in the water. Now they’re just going down to see how much sand we’ve lost that day. It’s sad and it’s shameful.”

Nickerson said the NSW government and Newcastle city council had known about the extensive erosion issues “since the 1980s” but there had been a lack of meaningful action.

He said erosion had been happening in Stockton “for at least 100 years” as a result of two manmade break walls constructed as part of the port of Newcastle works.

“When essential services are being affected it should send a clear message to the state government that it is now time to act,” he said.

Simon Jones, a group member and surfer, said the group wanted to know if they could move sand from a nearby bank about 1,000 metres offshore to replace the 10 million cubic metres he said had been lost.

“We feel [the government] should be taking a much more proactive approach. It’s just heartbreaking. As a kid I took the beach for granted, but I’ve watched it deteriorate before my eyes.”

The state MP for Newcastle, Tim Crakanthorp, accused the government of inaction, saying he had raised the issue “more than 50 times” in parliament.

He said: “It’s like bashing your head against a sea wall. This community is being washed away while the government buries its head in the sand.”

Lucas Gresham, a Stockton real estate agent who is organising the crowdfunding campaign, said the money would be used to fund any legal case.

“We need immediate sand nourishment – that’s going to help the community while we come up with an end result,” he said.

The city of Newcastle has carried out emergency works in recent weeks using large one-tonne sandbags while repairing a sea wall. The council has said the surf club, a local cafe and a car park “are safe for the long term”.

Associate professor David Kennedy, a coastal geomorphologist at the University of Melbourne, says what’s happening in Stockton is a “classic case” where human development has interfered with the natural movement of sand along coastlines.

He said it was fair for the residents to blame the construction of walls, adding: “We’ve interrupted the along-shore transport and, essentially, just blocked the flow of sand.”

Around Australia, he said, “we are seeing more and more cases like Stockton.”

“The developments we’ve been doing have reduced beaches’ natural resilience,” he said.

Honorary professor Andrew Short, of the University of Sydney, has visited every beach in Australia to study coastal systems. He says for hundreds of years Stockton has been losing sand to dunes to the north and this, together with the building of walls perpendicular to the coast, meant Stockton’s beach was being starved of sand.

He said many of Australia’s known hotspots for hazardous erosion had been created because as towns grew, buildings and infrastructure were built too close to the shore at a time when “they really didn’t know much better”.

A UN climate report on Thursday predicted that by 2050, the world would be experiencing a sharp increase in the number of extreme events caused by sea level rise.

Climate change, said Short, was “certainly going to exacerbate any problems that we’ve already got”.

Hancock, the local government minister who has responsibility for coastal management issues, told Guardian Australia she would visit Stockton beach to meet residents and council officials “in the coming days”.

She said the state government was working with the city of Newcastle to “develop solutions to manage the region’s coastline”.

The NSW government has given Newcastle city council more than $1.2m for tackling “issues across the region’s coastline”, she said, as well as support through numerous studies and reports aimed at finding solutions.

Hancock added she had asked the department of planning, industry and environment to speak to the council to help it apply for assistance through an $83m government fund, and she had also asked for deadlines for applications to be extended by two weeks.

*Title photo:Stockton beach is being washed away by dramatic coastal erosion, forcing people out of buildings close to the shoreline. Photograph: Supplied

‘We are a disease that is infecting our planet’: Jason Momoa urges climate action.