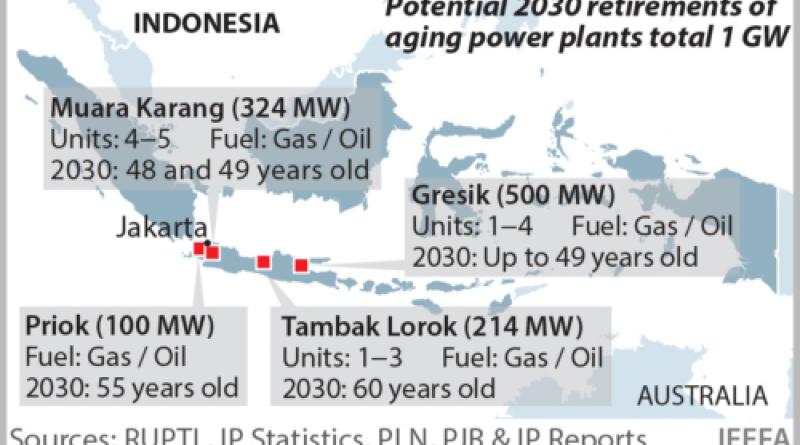 Recent announcements by Indonesia’s state-owned utility company Perusahaan Listrik Negara (PLN) to achieve carbon neutrality by 2060 must be met with caution and scrutinized as the numbers don’t stack up, according to a new report from the Institute for Energy Economics and Financial Analysis (IEEFA).

The report’s authors IEEFA energy finance analysts Elrika Hamdi and Putra Adhiguna say that PLN and the Ministry of Energy and Mineral Resources (MEMR) should be commended for their commitments to long-term climate change mitigation targets. However, these statements don’t appear to line up with their current and medium-term energy sector policy initiatives, although some positive developments do appear.

In May this year, PLN announced that it hopes to achieve carbon neutrality by 2060, in addition to Indonesia’s target of 23% renewables by 2025. This will begin with a series of conventional steam plants’ retirement starting from 2030 with the last one by 2056.

“The net-zero plan is not based on new initiatives that represent a reset of Indonesia’s carbon emissions pathway,” says co-author of the report, Elrika Hamdi.

Through IEEFA’s analysis, some key findings include:

1. The disclosed net-zero plan has no early coal plant retirement in sight. Instead, the plan simply highlights existing plans for an orderly decommissioning of PLN-connected coal facilities, following the economic age of each plant.

2. Approximately 16 GW of new coal capacity from the 35 GW program will still come online between 2021 and 2030. MEMR has conveyed President Jokowi’s instruction that no more coal plants should be considered except for those that are under construction or have reached financial close. With this exception, it is expected that 100% of Independent Power Producers’ (IPPs) coal pipelines in the 35 GW program will continue, despite the looming overcapacity in the Java-Bali and Sumatera grid.

3. The first phase of PLN’s 1 GW steam power plants (PLTU) retirement planned for 2030 are very old plants, that will have been in service for 50-60 years, and have been operating on oil or gas. 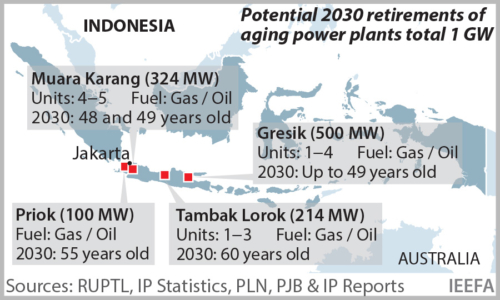 4. 10 out of the 12 ‘troubled’ small coal plants that were targeted for cancellation were actually cancelled two years ago in the 2019 Power Sector Business Plan (RUPTL).

5. Around 6.8 GW of NEW coal power “modifications” or “postponed” are found in the Draft RUPTL 2021. Although it raises questions as to why PLN and MEMR’s announcements have not drawn more attention to these and chose to emphasize the 34 troubled power plants with 177 MW of cancellations.

6. The proportion of renewables is now higher and the electricity demand growth projection for the next 10 years is toned down.

7. Biomass co-firing, large-scale hydro, and geothermal are the chosen shortcut to reach the Paris Agreement target in 2025, meanwhile solar and wind are still put on the back burner.

8. MEMR and PLN’s net-zero emission scenarios are based on different assumptions. While both plans clearly showed alignment on coal capacity reduction, the pathways for meeting the targets diverged widely. One of MEMR’s scenarios requires Indonesia to build an estimated 1.4 billion ton/year biomass industry by 2060, roughly two hundred times the US capacity as the world’s largest biomass exporter.

9. PLN’s increased operating profit in FY2020 was mainly a result of a huge drop in fuel expenses, mostly from oil and gas. This might be due to a sharp drop in oil prices due to Covid-19, new government support to cap gas prices for PLN, and a drop in fuel volume purchased due to declining demand in 2020.

10. PLN financial metrics would have looked different if they implemented the new SFAS 73 accounting standard for Power Purchase Agreements (PPA) and Energy Sales Contracts (ESC), yet they were exempted from such a requirement through an OJK Regulation No 6/2017.

“PLN would have booked a significantly lower net profit in FY2020 from IDR 5.9 trillion to IDR 990 billion. With this exemption, it is also worth noting that there is an estimated IDR 242.9 trillion of PLN’s liabilities that are currently not recorded on its book (off-balance sheet),” says Hamdi.

Co-author Putra Adhiguna notes that the gaps between the net-zero announcements and MEMR and PLN’s traditional planning process outputs raise the likelihood that the net-zero plan is still a work in progress.

“As a result, further changes and adjustments should be expected as key stakeholders examine the practical implications of these plans and refinements emerge,” says Adhiguna.

IEEFA recommends that the following areas should be on the shortlist for review:

1. Coherent and realistic targets. The first step is to ensure alignment between PLN and MEMR plans, with full consideration of which technologies are best positioned to deliver positive emissions outcomes.

“With the prominence of coal in the power system, rising consumption domestically is expected. Stakeholders should keep watch on the export quota which has been rising in recent years and any related pricing pressures,” says Adhiguna.

3. Has the renewable energy potential been explored to the fullest?

4. Attention should be focused on the un-needed coal plants which remain in the plan but could potentially be scrapped – especially those that have NOT REACHED financial closure. Stakeholders should ensure there is clarity on the definition of ‘deadlines’ – whether the deadline is for initiating construction, reaching financial closure, or putting the unit into operation- bearing in mind that ‘under construction’ can have a very liquid meaning. More importantly is to critically examine the drawbacks for adding more plants in already-congested grids, especially on the back of the government’s increasing subsidy and compensation payment which basically uses taxpayers’ money.

“PLN is well aware of the challenges in exiting contractual agreements for plants which are already in the later stages of development. But for those that have not reached financial closure after years of contract signing, it raises questions about the business viability of such a project,” says Hamdi.

“With PLN already struggling to manage excess capacity, this is a window of opportunity for PLN, with the government support, to fully reconsider plants which have not secured financial backing.”

Read the press release in Bahasa.

Indonesia utility will finish building 20GW of coal capacity before turning to renewables.