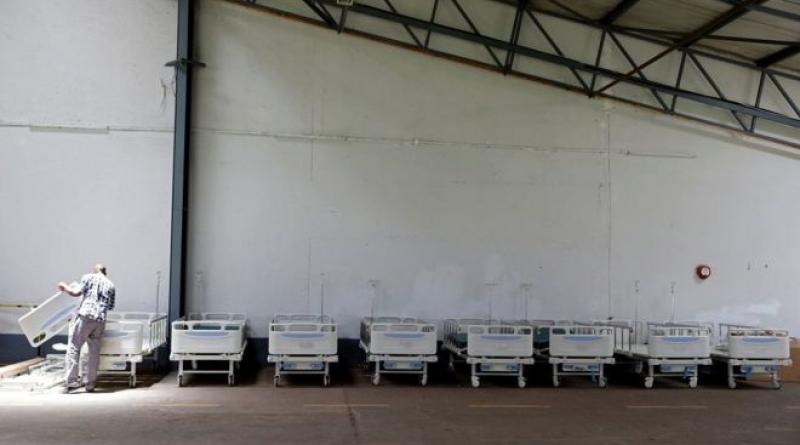 Africa has passed the grim milestone of 10,000 reported cases of coronavirus, along with more than 500 deaths, according to the Africa Centres for Disease Control and Prevention (ACDC).

As the daily number of new infections appears to be falling in parts of the world, some fear the epicentre of the virus could move to the continent.

Despite efforts to lock down cities and countries, despite donations of protective equipment, testing kits and ventilators from China, one thing is clear: Africa has not yet flattened the curve and the room for manoeuvre is getting smaller.

"What we are seeing is that this opportunity is no longer there or almost not there for some countries," says Dr Michel Yao, who runs the emergency response programme for the World Health Organization (WHO) in Africa.

"The worry is also now that [countries] cannot adequately manage this phase, they are moving to [in country transmission]. But we are seeing there is some delay in addressing [this]… to mobilise more people, train more people, think about capacity."

It is difficult to compare regions with different cultures, economies, travel links and infrastructure, but some comparisons paint an urgent picture.

In studying the daily increases in the number of those who have tested positive for coronavirus around the world, Africa appears to be controlling the spread better than in the US and Europe so far.

But the comparison with Asia, where some countries appeared to reduce the daily increase in the number of new cases relatively quickly, does not fare so well.

Perhaps a better comparison could be with the Middle East. There, cases have steadily risen, along with deaths, and the region has now recorded more than 78,000 cases in total, according to the WHO.

Nearly every African country has reported cases, and while most began with patients bringing the virus in through international travel, it is now spreading within communities.

Different variables make predictions difficult, but the worst-case scenarios are still jarring. "Cases can easily pick up," Dr Yao says, "even triple, maybe multiply by seven to 10 from what we have right now".

In South Africa, the last two weeks of March saw a 20-fold increase in the number of confirmed cases. In response to the growing numbers, President Cyril Ramaphosa declared a country-wide three-week lockdown that began on 27 March.

He has since extended that to the end of April as the number of daily new cases has dropped - though it is too early to say conclusively if the lockdown the reason.

What is significant is the rise in testing capabilities in South Africa.

The country has so far conducted around 60,000 tests for Covid-19, the disease caused by the virus, and is now testing at a rate of nearly 5,000 a day, according to Health Minister Zweli Mkhize.

But compared to other countries in the grip of the virus, that amount is still woefully inadequate. Italy - one the hardest hit countries in the world - has a similar population to South Africa and has conducted more than 700,000 tests.

Testing numbers are even more worrying across the rest of Africa.

Nigeria and Kenya have each conducted around 5,000 tests. Compare that with 600,000 in South Korea, who many see as having waged the strongest campaign against the virus.

"We are seeing an increase in the number of tests but I think we could do much more," argues Dr Abdhallah Ziraba, a research scientist and epidemiologist at the African Population and Health Research Center.

African countries have been fighting hard to raise their testing capacity.

Health ministries have worked to convert private laboratories into Covid-19 testing centres and major laboratories like the Pasteur Institute in Dakar have - through the ACDC-organised Covid-19 training seminars for laboratories around the region.

Still it has not been enough.

Bottlenecks in the supplies of reagents necessary for testing have limited capacity.

Chinese billionaire Jack Ma recently announced donations of more than one million sample extraction kits to African countries. It is unclear whether the full testing package will be included, but if so, the donation could prove critical to boosting tests continent-wide.

"We know there are challenges around the development of the tests, the cost of the test and the logistics involved but we can't be complacent and just think that people are not going to die," says Dr Ziraba.

According to a study written by epidemiologists in London and Johannesburg, a single reported death could mean a country already has hundreds or even thousands of cases.

The more tests that can be conducted, the more confident the continent can be in its data and the systems it has in place to fight the rising tide.

One of the major problems Africa will face in the coming weeks is exactly how to fight the virus.

So far South Africa's lockdown strategy has shown signs of promise. Other countries have followed suit.

One suburb of the capital of the Democratic Republic of Congo, Kinshasa, has followed suit.

Dakar in Senegal and Nairobi in Kenya have imposed curfews, allowing people to continue working but preventing social activity and travelling at night.

The spectre of a total lockdown however risks a complete halt of economic activity across the continent.

More than a third of the population of the continent lives below the poverty line. While most of those live in rural areas and potentially have access to subsistence farming, around 20% live in urban areas, relying on casual labour to feed themselves and their family.

If it proves necessary to completely cut them off from jobs and markets, the potential death toll is unknown.

"Economic recession and deteriorating livelihoods mean impoverishment, malnutrition, worsened access to routine health services, and that in turn all means lives lost as well," says Dr Francesco Checci, a professor of epidemiology at the London School of Hygiene and Tropical Medicine.

"Lives lost not just among the old but also among children and younger people. So there is a really difficult equation there."

Countries like Rwanda have started to distribute food and resources in anticipation of those consequences. In Cape Town, in South Africa, even notorious street gangs have begun to help distribute food.

In other countries, the plan is less clear.

In Kenya, civil society groups have started collecting funds and food for lower income families. Ethiopia has declared a state of emergency, despite Prime Minister Abiy Ahmed recently saying that "we can't impose a lockdown like more developed nations, as there are many citizens who don't have homes".

African nations have limited resources to replace the incomes of their citizens. Those difficulties again highlight the importance of testing.

Africa CDC Joins Forces with Co-Creation Hub to Use Smart Ways to Educate and Sensitize the Continent on COVID-19.

We practised for a pandemic, but didn’t brace.