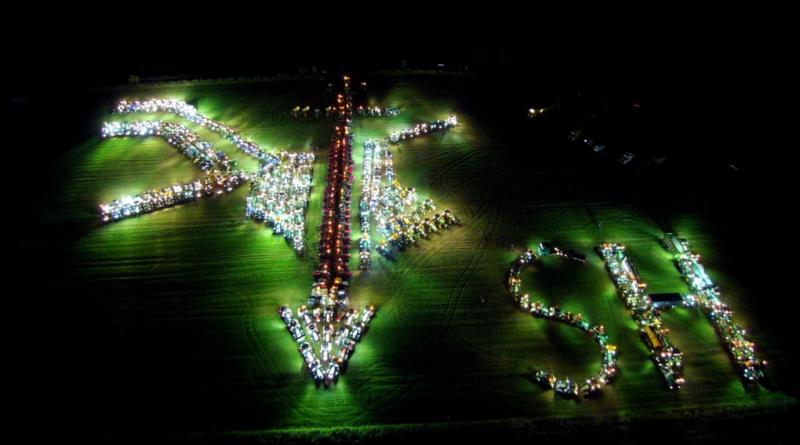 Extremists exploit rural nostalgia and farmers’ anger at globalisation to smuggle in ideology.

The poster advertising the evening of debate and organic canapés in Halle’s university district looked familiar to environmentally conscious Germans: a rugged pair of hands, cupping fertile brown soil, underneath the slogan “Farms instead of agricultural factories”, written in a font mimicking that of a popular biodynamic food brand.

The only hint the event wasn’t organised by sandal-wearing good-lifers but a local group of far-right nationalists was in the subtitle: “Let’s chase the globalists off our acres!”

Farmers associations and environmental groups in Germany are increasingly warning of a new strategy pursued with increasing transparency by the country’s new right: to use the enduring popularity of organic lifestyles and a burgeoning green movement as a step into the mainstream.

One harbinger of this is a new quarterly glossy magazine Die Kehre (The Turning), published this month, which describes itself as a “magazine for natural protection”. It draws its title from the writings of anti-modernist philosopher Martin Heidegger and tries to reclaim environmental concern as a reactionary cause.

In its editorial, the magazine describes ecology as the “crown jewels” of the right “robbed” by the leftwing green movement in the 1970s, and argues for redefining the subject away from Klimaschutz (climate protection) towardsHeimatschutz (homeland protection). Several articles warn of the danger to Germany’s “native” bird species and “fairytale forests” posed by windfarms.

Another column cites a manifesto by far-right thinktank Recherche Dresden, “Seven theses for a conservative-ecological turn”, written in the wake of the German Green party’s triumph at the 2019 European elections: “The world’s population has to be stabilised at a lower level – otherwise we face irreversible ecological collapse.”

If the magazine’s political messages are at times deliberately covert, the leanings of its supporters are less so: one of its most prominent champions on social media is Björn Höcke, the Thuringian leader of far-right party Alternative für Deutschland’s aggressively nationalist wing – a German court last year ruled he could legally be called a fascist.

The magazine is edited by a member of the Identitarian movement, a group of nationalist activists that Germany’s domestic intelligence agency last year declared an extremist entity, and which also hosted the information evening about permaculture and sustainable farming in Halle at the start of last year. That event was not an isolated instance: a survey carried out among German natural protection NGOs found this month that 42% of respondents had in their work come across people with rightwing extremist views.

“We discovered a significant number of environmental groups who had contact with far-right ideologues,” said Daniela Gottschlich, one of the political scientists who conducted the survey for the Diversu thinktank. “We discovered many felt unable to cope with the challenge and ask for support.” As such, attempts to use green issues to smuggle far-right ideas into respectable society are not new, said Yannick Passeick, a spokesperson for Farn, a government-sponsored body against radicalisation among environmentalist groups.

Coming from older rightwing extremist parties like the neo-Nazi NPD, Passeick said, “It is a method we have known for decades.” What had changed since the AfD entered the German parliament in 2017, he added, “is the way these attempts are becoming more aggressive and openly visible”. Visibility was also the motive in the northern municipality of Oldenswort on 11 June, when farmers arranged 324 tractors on a field to form the outline of a red sword cutting a white plough – the symbol of the Landvolkbewegung, a farmers’ protest movement active in the state of Schleswig-Holstein from 1928 to 1933. Most famously portrayed in Hans Fallada’s novel A Small Circus, the “rural people’s movement” set out to draw attention to their financial difficulties and the ineffectiveness of their lobby groups, but ended up planting bombs at public buildings, including the Reichstag.

Though Hitler later banned members of the Nazi party from joining inLandvolkbewegung’s protests, historians argue the movement’s nationalistic and anti-parliamentary agenda aided the rise of National Socialism. The revival of the movement’s symbol has been criticised by local politicians.

Farmer Jann-Henning Dircks, who organised this month’s protest, told theObserver he learned about the historical group from the nephews of one of its founders. The sword in the symbol, he said, was “the knife used by the politicians and know-it-alls in our country to destroy our homeland”.

Farmers were frustrated with the growing bureaucracy posed by new regulations on the use of fertilisers and the protection of insects, he said, adding that legal inconsistencies across the EU meant German farmers were struggling to compete against counterparts in eastern Europe.

Asked why he had chosen to reclaim such an inflammatory symbol, he said: “You have to cause a scandal before you get a hearing. Obviously we distance ourselves from National Socialism, but we can’t deny our history”. Dircks said his movement would resist being patronised by any party, and claimed there had been no overt attempts to seek contact from far-right groups. “I don’t even know anyone in the AfD, but since not everyone wears their party membership on their sleeve, I can’t completely rule it out either.”

How did Michael Moore become a hero to climate deniers and the far right?