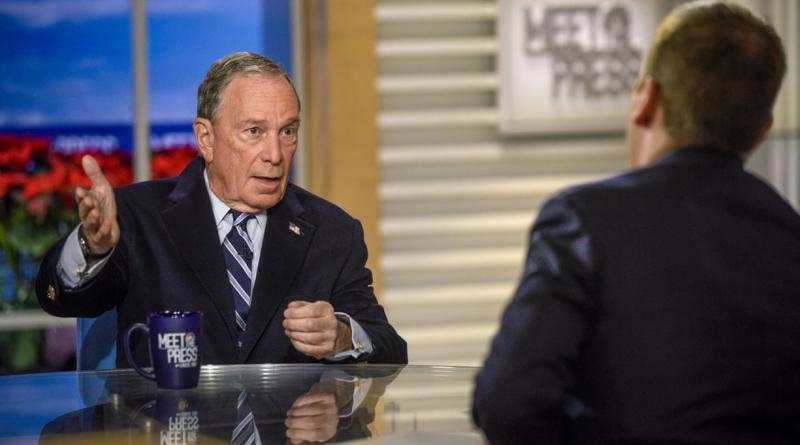 Michael Bloomberg slammed Donald Trump’s inaction on climate change on Sunday and said any candidate for president in 2020 – he himself might be one – must have a plan to deal with the problem.

At the same time, retiring California governor Jerry Brown likened the fight against climate change to the fight against Nazism during the second world war, saying: “We have an enemy … perhaps very much devastating in a similar way.”

Both men appeared on NBC’s Meet the Press. The billionaire former New York mayor said: “It would be a lot more helpful if we had a climate champion rather than a climate denier in the White House.

A vocal critic of the coal industry, Bloomberg, whose fortune is estimated at $40bn and who spent $100m on his last mayoral race, has said he plans to make climate change a leading issue in the 2020 race, whether or not he runs.

“Any candidate for federal office better darn well have a plan to deal with the problem that the Trump science advisers say could, basically, end this world,” he said. “I can tell you one thing, I don’t know whether I’m going to run or not, but I will be out there demanding that anybody that’s running has a plan.”

Bloomberg paid his latest visit to Iowa, site of the first voting in the presidential election cycle, earlier this month. Joining him in a call on Sunday to make climate change a national priority was Brown, a presidential hopeful in the past now standing down after 16 years at the head of the Golden state. He said wildfires in California should serve as a wake-up call.

“We see it in the fear in people’s eyes, as they fled, many elderly who died,” Brown told NBC. “This is real, it’s dangerous. And we’ve got to wake up the country, wake up the world.”

Brown, one of the few governors to have implemented climate policy, compared the challenge of galvanizing public opinion to that faced by Franklin Delano Roosevelt in 1941.

“It took Roosevelt many, many years to get America willing to go into world war two and fight the Nazis,” he said. “Well, we have an enemy, though different, but perhaps very much devastating in a similar way.”

“He is very convinced of his position,” Brown said of Trump. “And his position is that there’s nothing abnormal about the fires in California or the rising sea level or all the other incidents of climate change.”

Brown contended that US economic wellbeing, conventionally trumpeted by theTrump administration, was the key issue on which Americans should vote.

Seventy percent of Americans believe “global warming” is happening, according topolling cited by NBC, but only 57% believe climate change is caused by humans.

A rejection of the human role in climate change is a central plank for political leaders who refuse to back environmental regulations and other policies to confront the problem.

“The world is getting hotter,” Bloomberg said. “There are bigger storms than ever before; there are droughts where we used to have floods and vice-versa; our water is getting less; and we’ve got to do something about it.

“The challenge is what we do about it. And the opportunity is the value of what we do.”