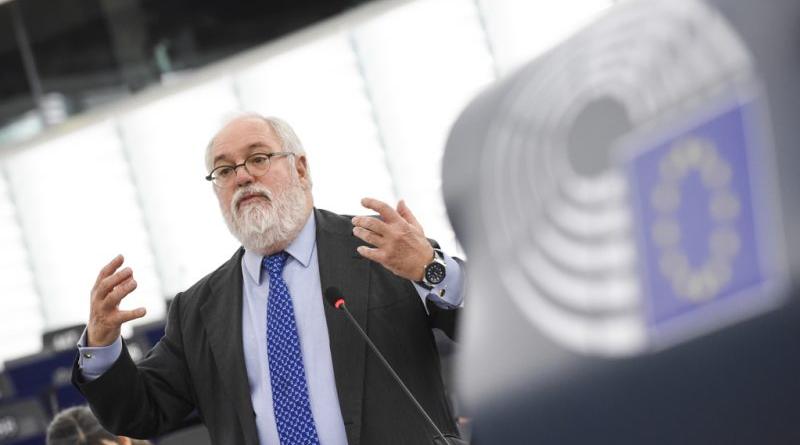 Members of the European Parliament voted in favour of increasing the EU’s 2030 emission cuts target to 55% and a net-zero mid-century target on Thursday (14 March), bringing an end to weeks of infighting.

At the monthly plenary session in Strasbourg, EU lawmakers backed a non-binding resolution on the European Commission’s draft climate plan for 2050.

The main highlights included a call to increase the bloc’s overall emission cuts target for 2030 from the current 40% to a beefed-up 55%. MEPs have gradually come around to an increase to the benchmark since a landmark United Nations report was published last October.

However, that did not stop most of the centre-right European People’s Party (EPP) members from voting against the call for an increased 2030 goal.

European Commission data released last year showed that the EU is currently on track to achievearound 45% cuts to carbon dioxide, methane and other greenhouse gases.

Lawmakers also approved the EU executive’s push for a ‘climate neutral’ European economy, which is the lynchpin of its 2050 draft climate plan. The resolution calls on member states to do the same, which could prove crucial as national leaders will ultimately have the final say on the Commission’s plan.

At a recent meeting of Europe’s energy ministers, former MEP and Luxembourg’s current energy chief Claude Turmes warned that of the eight scenarios proposed by the Commission, only two actually stand a chance of making sure Europe sticks to the Paris climate accord.

Yesterday’s resolution also concluded that only the two most ambitious scenarios are adequate and called on what will be the next European Commission to present legislative proposal by 2022-2024.

Ministers for energy, environment and economy have all already held public debates about the Commission plan and heads of state and government are expected to have their say at next week’s European Council summit.

Commission officials are hopeful that EU leaders will give the draft plan their full attention at an upcoming summit in Romania on 9 May, as signatories to the Paris Agreement are meant to submit their long-term strategies to the UN by 2020.

EU climate boss Miguel Arias Cañete told the Parliament ahead of the vote that he wants the bloc’s future climate plans to form an integral part of the upcoming pan-European elections at the end of May, upping the pressure on leaders to broach the subject at the 9 May summit.

The draft climate strategy was the catalyst for what was labelled a “bizarre” squabble among MEPs from different committees this year.

Both the environment and energy committees insisted that they were best placed to draft the resolution on behalf of the entire Parliament and that the others were welcome to submit amendments to their efforts.

Parliament officials were at a loss when both ENVI and ITRE committees pressed on with their own resolutions and put them to successful internal votes at the end of February.

Ultimately, the decision was made to submit a joint political group resolution (JRM), which was a mixture of all the positions, excluding those of the European Conservative and Reformists Group.

This was the resolution that finally got the green light.

This came as a relief for environmental groups, which expressed concerns that the energy committee’s resolution would be voted on next if the JRM failed to pass, sidelining the text backed by the Parliament’s environment committee, which they regarded as more ambitious.

MEPs also gave their support to the wave of climate marches and school strikes that have gained momentum across Europe.

Teenage Swedish activist Greta Thunberg, who recently gave an impassioned speech in Brussels in which she insisted the 2030 target should be increased to over 80%, has emerged as a figurehead of the youth movement.

This week, her efforts were recognised by the Nobel committee, which nominated her for its annual coveted Peace Prize.

On Friday (15 March), demonstrations are planned across Europe and other parts of the globe, which some commentators have suggested will be the largest climate marches ever held.