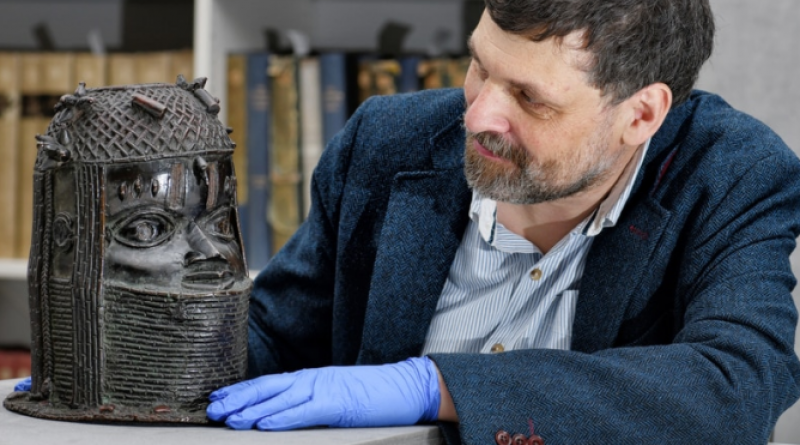 LONDON - The promise to return several Benin Bronzes from three Western institutions to the former Kingdom of Benin in Nigeria was celebrated by many. But returning all the artifacts looted by British soldiers 125 years ago will continue to be a challenge.

In recent weeks, a university in Scotland and museums in Germany and Britain pledged to repatriate the Benin Bronzes they own.

The restitution is hugely symbolic to Timothy Awoyemi, a British-born Nigerian who helped repatriate two Benin Bronzes in 2014 from a private collector whose grandfather had been part of the 19th century looting. Awoyemi says he was elated when he heard about the latest returns.

“They stole it so it makes me happy, because the stolen artifacts are going to be returned back to where they rightly belong,” he said.

British soldiers looted the Kingdom of Benin in what is currently Edo state in Nigeria, during a punitive military expedition in 1897. The high valued plaques, masks and sculptures functioned as an historical archive to the Benin royal palace. The sculptures made of brass, bronze and ivory are now owned and displayed across Western museums and institutions.

Oxford Professor Dan Hicks is the curator of the Pitts River Museum, which holds 145 Benin objects. He authored a book about the bronzes, and says the displays of stolen art in Western museums continues to hurt people in the present.

Hicks says the argument that Western museums would be emptied out or shut down is unlikely as restitution needs a case by case approach.

Thousands of bronzes from the former Benin empire are held in private collections and in over 160 museums around the world. Most have offered to discuss loaning the bronzes instead of repatriation.

The British Museum in London holds about 900 Benin objects, the largest collection in the world. Its website reads no formal written request has been received for the return of the entire Benin collection, despite the bronzes being filed under “contested objects.”  Additionally, laws would need to be changed because British national collections are prohibited from giving away their collection.

The African Foundation for Development, Afford, is a British based charity, which, for the past year, has investigated the challenges and obstacles related to returning African artifacts.

Executive director Onyekachi Wambu says that even if the national collections aren’t willing or able to repatriate, there are many more places and people owning Benin Bronzes.

“There's lots of different museums around the country, which have their own collections, and they're not covered by the law. There are others that are in private collections, and those are going to be much more difficult to do because, you know, those people sometimes don't want to do it,” he said.

It’s said over 90 percent of African cultural legacy is held outside the continent.

Although many Western countries have laws ensuring the return of Nazi-looted art, this approach has not been extended when it comes to art stolen from Africa and other parts of the world.

These African World Heritage Sites are under threat from climate change.