'A duty of care': Australian teenagers take their climate crisis plea to court. 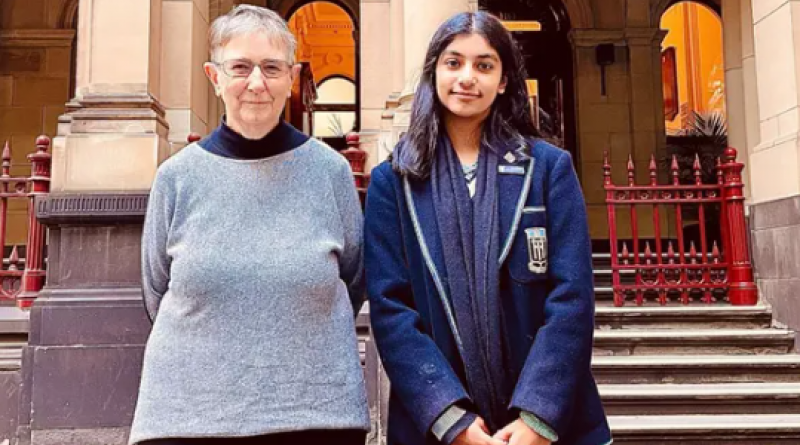 Anj Sharma, 16, and her team hope to force change they say is not coming quickly enough from government.

Eight teenagers and an octogenarian nun head to an Australian court on Tuesday to launch what they hope will prove to be a landmark case – one that establishes the federal government’s duty of care in protecting future generations from a worsening climate crisis.

If successful, the people behind the class action believe it may set a precedent that stops the government approving new fossil fuel projects.

As with any novel legal argument, its chances of success are unclear, but the case is not happening in isolation.

It is one of a number of climate-related litigation cases expected before Australian courts and tribunals in the months ahead as lawyers and activists aim to use the law to force change they say is not coming quickly enough from Canberra or, in many cases, state governments.

The lead applicant of the case in the federal court in Melbourne this week is Anj Sharma, a 16-year-old student. Her involvement evolved from her role helping organise a Greta Thunberg-inspired school strike for climate in September 2019, when about 100,000 marched in the Victorian capital.

The case is a response to a proposal by Whitehaven Coal to extend its Vickery coalmine in northern New South Wales. The expansion of the mine could lead to an extra 100m tonnes of CO2 – about 20% of Australia’s annual climate footprint – being released into the atmosphere as the extracted coal is shipped overseas and burned to make steel and generate electricity.

The teenagers and their legal team argue the federal environment minister, Sussan Ley, would be breaching a common law duty of care to protect younger people against future harm if she used her powers under national environment laws to allow the mine extension to go ahead.

Solicitors at Equity Generation Lawyers, a Melbourne firm, had been working on the case and through the climate strike movement were connected with eight teenage activists who would join it and be its face. They are spread across four states, but most live in Sydney.

Anj says all eight have “very personal stories about climate change”, including the changing impact of the monsoon season on family members in India and witnessing firsthand the impact of fracking for coal-seam gas.

“The decisions that they make right now will impact us in the future. We’re the ones who are going to have to live with the decisions, we’re going to have to raise the next generation under those decisions, and we just want a future that is guaranteed to be safe for us,” she told Guardian Australia’s Full Story podcast. “They truly do have a duty of care towards us.”

A spokesperson for Ley declined to comment while the case was before the court.

The group taking the action includes Izzy Raj-Seppings, who police threatened to arrest in a protest outside Kirribilli House in December 2019. Given they are legally minors, the teenagers are being supported by Sister Brigid Arthur, an 86-year-old nun and former teacher who volunteered to be their litigation guardian, a role she previously played in cases involving young asylum seekers.

While the arguments being made are unusual in an Australian context, the ideas that will be heard across the five-day trial are similar to those being tested in a growing number of international cases that aim to hold governments to account for not doing more to address global heating.

The forerunner was a 2015 Netherlands judgment that found the government had an explicit duty to protect its citizens’ human rights in the face of climate change and must reduce its emissions by at least 25% by the end of 2020 compared with 1990 levels.

Earlier this month, a Paris court convicted the French state for not keeping its promises to tackle greenhouse gas emissions. The four environmental groups that brought the case, backed by a petition signed by 2.3m people, have pledged to use the judgment to push the French state to act more aggressively to combat the climate emergency.

There are other cases afoot in Australia. The legal team behind the Vickery coalmine extension case is also representing Melbourne law student Katta O’Donnell, who last year filed a claim accusing the federal government of misleading investors in sovereign bonds by failing to disclose the financial risk caused by the climate crisis.

David Barnden, the principal lawyer at Equity Generation representing the teen activists, says: “With their future at stake, it stands to reason young people in Australia are taking the fight to those in power.”

The climate legal cases before Australian courts can be loosely divided into two categories – those that aim to stop or reverse planning approval of fossil fuel developments through traditional legal means, and those that are attempting to break new ground.

The latter group includes cases arguing the government has a duty of care, made on human rights grounds, and focused on the principle of carbon budgets, which aim to stop developments on the ground they would push the country beyond what it can mathematically emit if the world is to meet the goals of the Paris agreement.

David Morris, the chief executive of the Environment Defenders Office (EDO), says the most significant climate litigation victory in Australia to date was a February 2019 judgment that blocked the proposed Rocky Hill coalmine, in NSW’s Gloucester Valley.

The chief judge of the state’s land and environment court, Brian Preston, explicitly cited the role coal from the mine would play in increasing global greenhouse gases “at a time when what is now urgently needed, in order to meet generally agreed climate targets, is a rapid and deep decrease”.

The EDO is supporting several challenges to fossil fuel projects backed by state governments. They include action against Clive Palmer’s proposed open-cut and underground thermal coal in Queensland’s Galilee Basin by Youth Verdict, a human rights and climate action group. It is listed for the Queensland land court in May.

Others are questioning the legality of the Burrup Hub liquefied natural gas processing hub in the Pilbara and the Narrabri coal-seam gas development in northern NSW. The EDO is also representing the group Bushfire Survivors for Climate Action in taking on the NSW Environment Protection Authority, accusing it of breaching its statutory duty in failing to have a policy to regulate greenhouse gas emissions.

Morris says climate litigation based on the idea the government has a role to play in protecting people from climate catastrophe is only going to grow. He compares it to the rising push against the tobacco industry as the health ramifications became undeniable.

“Ten years ago, these sorts of cases seemed wild. People would have thought ‘how can you possibly have a case like that’,” he says. “Now, I think it’s going to become increasingly normal.”