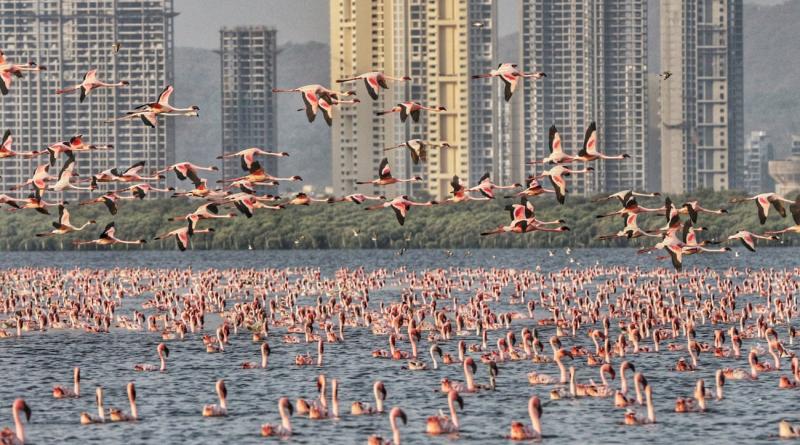 The flamingo population of India’s largest city has tripled. Is it thanks to sewage boosting the blue-green algae they feed on?

There is an air of anxious excitement among the urban professionals and tourists on board our 24-seater motorboat as we enter Thane Creek.

A chorus of “oohs” and “aahs” breaks out as we spot the visions in pink we came to see – hundreds of flamingos listlessly bobbing in the murky green water – followed by the furious clicking of cameras.

Then, almost as one, the birds skim the water and take off in sync. “They always stay together,” says Prathamesh Desai, who has been organising birding excursions in the city for seven years. “They are an extremely gregarious species.”

These birds have begun congregating in India’s largest city in astonishing numbers. A count in January this year found 120,000 flamingos in the city – three times their highest population in at least four decades.

“Flamingos began migrating to Mumbai in the 1980s and 1990s,” says Rahul Khot, assistant director of the Bombay Natural History Society (BNHS), one of the oldest scientific institutions in India. “Records show that since then their numbers have hovered between 30,000 and 40,000 each season.”

Of the six species of flamingos in the world, it is the greater flamingo (taller, with a black-tipped pink bill) and the near-threatened lesser flamingo (shorter, with a dark crimson bill) that are found in India. The birds arrive in Mumbai from the north-west, from Kutch in Gujarat and Sambhar Lake in Rajasthan. Smaller numbers of the birds are believed to fly in from Pakistan, Afghanistan, Iran and Israel. Some are thought to come from as far as France.

In Mumbai most settle in Thane Creek, home to around 200 species of birds. They can also be spotted on smaller wetlands such as those at NRI colony and TS Chanakya.

Last May the BNHS embarked upon its first formal survey of the flamingos in Thane Creek as part of a 10-year study of wading birds.

While Khot feels it is premature to speculate on the cause of the huge spike in the flamingo population, the birds’ polluted habitat appears to hold clues. Thane Creek has become a dumping ground for untreated domestic sewage and industrial effluents from the city – and one of the best sites to spot large flamingo congregations in Mumbai is near the Bhandup water treatment plant.

“It is a well-studied phenomenon in nature that one species’ waste is food for the other,” says Debi Goenka, BNHS honorary secretary. “The sewage in the creek promotes biological growth of blue-green algae, which is food for the flamingo.”

Sunjoy Monga, a naturalist and author of the book Birds of Mumbai, says the creek may have reached “what one might call perfect levels of pollution”: “Over the years the industrial discharge dispelled by the industries of the Sewri Bay may have warmed the water. The nitrate and phosphate levels in the creek water are just right for the prolific growth of the algae.”

Although alarmed by the high levels of pollution in the creek, Monga says a pristine habitat would deprive flamingos of food and drive them away. “This phenomenon is called edge nature,” he says. “Here, wilderness merges with human impact and some species are able to thrive in it. It’s a double-edged sword.”

He also believes “drought-like conditions” in the wetlands of Kutch are the specific reason the flamingos have migrated to Mumbai in such large numbers.

But in this fast-changing city, the flamingos are already being moved on. A former flamingo hotspot, the Uran wetlands, has been recently reclaimed to make way for a new airport. Meanwhile, the ongoing construction of the Mumbai Trans Harbour Link – a 22km sea bridge that cuts across mangroves and mudflats to Navi Mumbai – means flamingos no longer flock in such numbers to Sewri Bay, which lies between Thane Creek and the Arabian Sea. Last month clearance was given to India’s first bullet train to pass through the creek’s protected flamingo sanctuary.

Goenka says the continued dumping of sewage and waste into the creek will eventually drive the flamingos out.

“The dumping of sewage and construction debris in the creek is causing the expansion of the mudflats and surrounding mangroves,” he says. “At the moment it’s a great situation for the birds, but this continued expansion will cause the creek to dry up. Then there won’t be any mangroves or mudflats … and definitely no flamingos.”