Device inspired by mangroves could help clear up flood water. 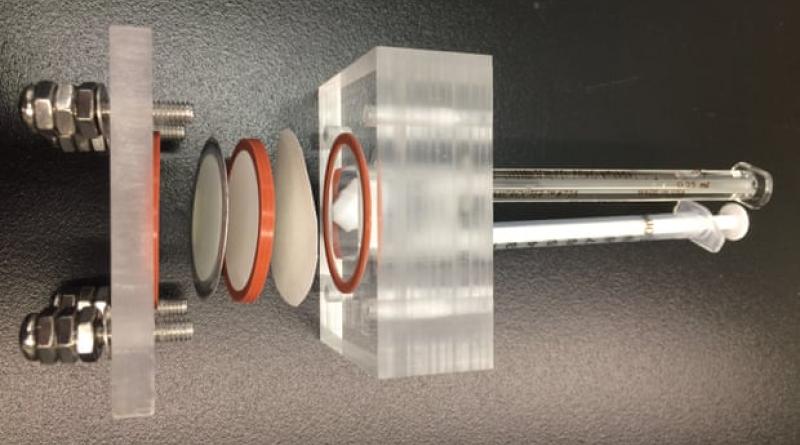 A novel approach to removing salt from water, inspired by mangrove trees, has been revealed by researchers who say the system could offer an unusual approach to clearing up flood water.

Mangroves, like other trees, employ a system of water transport: it is thought evaporation of moisture from their leaves produces a negative pressure in their water-conducting tissues that helps to draw water into their roots and up their trunks.

Salty water can damage most plants, but mangroves can thrive in salty conditions because they have adaptations including cell membranes that prevent salts from passing through in an uncontrolled manner, as well as cell walls that contain a waxy substance.

The upshot is that a mangrove essentially “desalinates” the water from its surroundings.

Now, writing in the journal Science Advances, researchers say they have reproduced this process in a synthetic system, using a polymer membrane that filters out salts as the “root”, a finely porous silica filter as the “stem”, and “leaves” based on either a hydrogel-filled membrane or aluminium oxide featuring tiny pores.

“In our particular demonstration, through simple evaporation, a huge negative pressure was generated to drive water flow through a semi-permeable, reverse-osmosis membrane, thereby desalinating the water,” said Dr Jay Werber and Dr Jongho Lee, co-authors of the study, who carried out the work at Yale University. “In the industrial process, large, high-pressure pumps – and loads of electricity – are required to generate these high pressures to drive flow and desalination.”

Importantly, they note, their system works without the production of air-bubbles – which can block the flow – thanks to the use of the membrane and tiny pores in the silica “stem”.

The team add that replicating the natural process adds support to the theory of how water transport in mangrove trees occurs.

However, they note that the system is not a practical way to desalinate water, not least since a large amount of heat would be needed.

“The energy that drives desalination in our device is absorbed from the environment: basically, heat is absorbed to drive evaporation,” said Werber and Lee. “In a small-scale device, this energy is essentially ‘free’, meaning that it isn’t provided as electricity or generated heat, similar to how drying clothes on a clothes line doesn’t take added energy. However, trying to scale this up to large volumes would be very challenging.”

But they offer an alternative suggestion: incorporate the system into buildings to turn them into giant sponges, offering a novel way to handle stormwater and reduce flood damage.

“In this scenario, the buildings themselves would soak up excess groundwater and evaporate the water from their walls and roofs,” the authors write.

And there is a bonus: “The evaporation of water from the building walls would additionally provide passive cooling,” the team write.

Prof Marc-Olivier Coppens, director of the UCL Centre for Nature-Inspired Engineering, who was not involved in the study, described the team’s synthetic mangrove device as remarkable, but said further developments would be needed.

“The proposed device is a creative, exciting development; however, the application of this principle is still early stages,” he said. “Higher stability for longer times than those tested here, with less salt build-up, but also the possibility to be used for real seawater, containing more [chemical] species, would be necessary for practical use.”

He added that the idea of using such synthetic mangroves for stormwater management was exciting. He said: “It remains to be seen whether sufficient fluxes and total flows can be achieved for this application, but it is a compelling application.”

How Smart Devices Can Help Solve the Challenge of Climate Change.