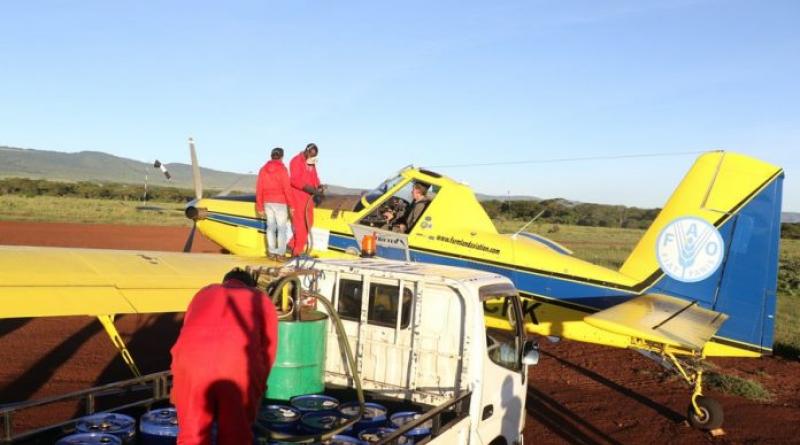 Food and Agriculture Organization of the United Nations (FAO) said on Thursday that robust interventions rolled out by governments and donor agencies to fight desert locusts in the Horn of African region are bearing fruits.

Dominique Burgeon, director of FAO’s Emergency and Resilience Division said that timely response to the voracious pests minimized havoc to livelihoods in the region.

“There was a higher degree of preparedness and capacity on the ground to fight desert locusts in the region,” Burgeon said during an exclusive interview with Xinhua in Nairobi.

He said that governments were in charge of the bulk of desert locust control operations, adding that COVID-19 related disruptions failed to slow down the momentum towards eradicating the pests.

Burgeon had earlier led a high-level team of FAO officials on a visit to northern Kenya to assess progress achieved in fighting the desert locust invasion since the beginning of this year.

He said the UN agency has rallied behind state-led interventions to eradicate the pests that had ravaged crops and pasture in northern Kenyan counties amid threat to food security and livelihoods.

Burgeon said Kenya had demonstrated commitment to curb the spread of desert locusts through the adoption of modern technologies, training of extension workers and public awareness.

“The last time Kenya experienced a major desert locust invasion was 70 years ago but the level of preparedness during the current wave was impressive,” said Burgeon.

According to Burgeon, Kenya was on course to eradicate the migratory pests as the number of infested counties reduced from 29 to three, while the country reclaimed 157 acres of land and cushioned 350 tons of cereals from damage that could feed nearly 2.1 million people within twelve months.

He said that Horn of African states grappling with an invasion by desert locusts had also demonstrated zeal to eradicate the pests even as they battled other pressing challenges like climatic shocks, civil strife and COVID-19 disease.

Burgeon said that the UN food agency had been assisting countries in the region to readjust techniques of fighting the desert locust menace to minimize risks to livelihoods and ecosystems.

“We have partnered with governments to ensure that new technologies are adopted to fight desert locusts as opposed to over-reliance on pesticides that can harm the environment,” said Burgeon.

This time around, we are using more sophisticated surveillance technologies like Global Positioning System (GPS) that is accurate in tracking desert locusts,” he added.

According to Burgeon, every dollar invested in the anti-desert locust fight could multiply to an additional six, adding that solidarity among Horn of African states has revitalized the war against the pests.

He urged enhanced vigilance amid the possibility of another wave of desert locust invasion in the upcoming rain season across the greater horn of Africa region.

“The expected flooding during the rainy season could create the ideal breeding environment for the desert locusts,” said Burgeon.

“We must remain focused since active swarms exist in Somalia, Ethiopia and Yemen and can migrate to neighboring countries once the conditions permit,” he added.

Burgeon said that building the resilience of local communities will form the next phase of the desert locust battle in the region.

Which Countries Are Most Vulnerable to Locust Swarms?