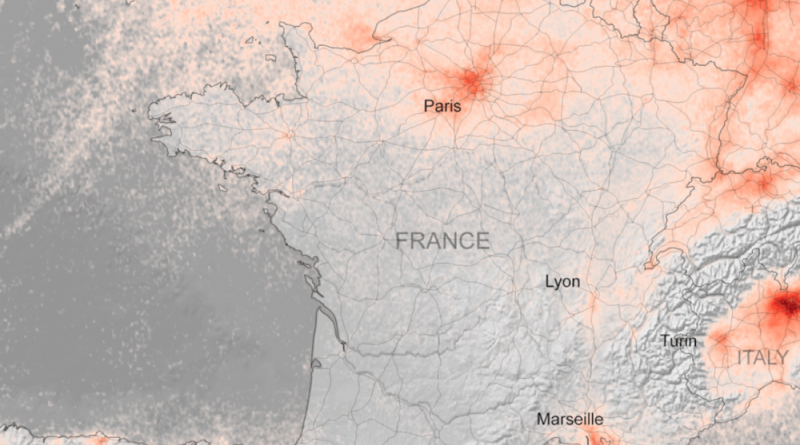 The global quarantine has been both drastic and painful. From Space, ESA has been witness to the direct impacts of the current public health emergency.

Images taken from Copernicus Sentinel-5P satellite over Europe’s capital cities during March present stark reductions in nitrogen dioxide (NO2) - a pollutant linked with respiratory and heart conditions.  Compared to the same period in 2019, levels were down by 48% in Madrid, 49% in Rome and 54% in Paris.

Satellite data show that the toxic haze lifted across the globe, not only in Europe but notably the megacities of both China and India.

“The vantage point of space reveals the impact that humans are having on the planet,” says Dr Aschbacher, “lockdown has opened a window on what a possible future post-Covid world where we seriously tackle pollution and protect our planet’s health.”

While researchers scramble to assess the impact of emissions on health and climate change, visible and persistent emissions hotspots can still be observed.

He adds that, even in the post-Corona virus era, climate change will remain the largest systemic global risk of the 21st century. Society will have a curve to flatten: the level of greenhouse gases in our atmosphere.

As stimulus packages are being formulated by governments around the world, Dr Aschbacher urges the case for linking them closely to climate change measures. By supporting the rapid transition to a green economy – as envisaged in the European Green Deal – we can decarbonise and remain prosperous.

ESA’s satellite missions, including the Copernicus Sentinels which it develops and launches on behalf of the European Commission, already provide a substantial contribution to climate monitoring. Spanning decades, these long-term data records enable scientists to identify climate trends, test the models used to predict future change and inform decision-makers to mitigate and adapt to the impacts.

Future ESA missions will be indispensable ally for both the European Green Deal and the Paris Agreement. The Copernicus Sentinel-5P mission is already capable of resolving major sources of methane from large oil and gas fields.  In November 2019, ESA Member States approved the new CO2M mission. Set for launch in 2025, it will help identify industrial point sources of carbon dioxide emissions.

The new data will help nation states to decarbonise: helping to validate emissions and assess policies aimed at deliver net reductions. Through the  global stocktake, these will help to determine whether deeper emissions reductions are required to stay in line with the long-term goal of keeping global warming well below 2 degrees Celsius.

Dr Aschbacher says that, “now is the time to rethink some activities. Investing in green growth will support the post-Covid revival, to generate wealth and secure well-being, not just in the short-term but for future generations.”

What Will the World Be Like After Coronavirus? Four Possible Futures.

Will the SDGs Still be Relevant after the Pandemic? A Disability Rights Perspective

A better world can emerge after coronavirus. Or a much worse one.