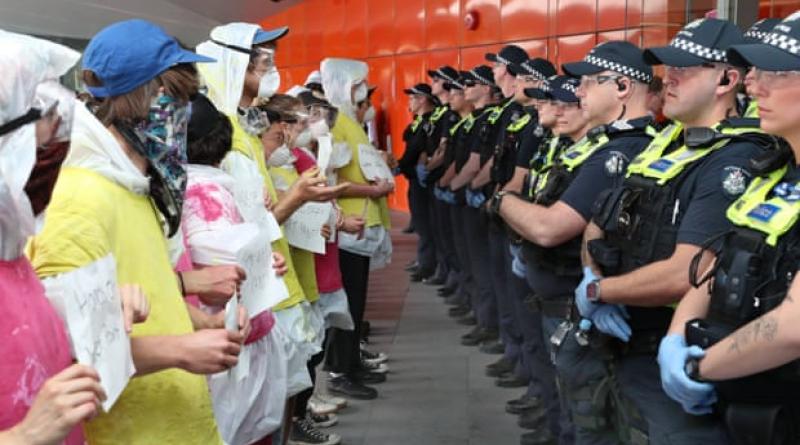 The Morrison government is offering fossil fuel companies grants of up to $250,000 to attend industry events as part of a program that is supposed to help the Australian conference industry recover from a coronavirus-induced slump.

A dozen events involving the oil, coal and gas industries are among 150 so far approved by the Australian Trade and Investment Commission as part of the $50m stimulus package.

They include the International Mining and Resources Conference (Imarc), where police action in 2019 to break up a blockade left one protester in hospital.

Bans on travel and social distancing rules smashed the events sector in 2020. Instead of face-to-face conferences, industry bodies and other organisers instead either held events online or cancelled them altogether.

Announcing the program in September, Scott Morrison said that “getting business events up and running again will be a critical part of the recovery of our tourism industry, but will also have huge flow-on effects through the entire economy”.

“This is not only about supporting events companies and venues, but will also be a shot in the arm for a broad range of businesses and the people they employ – whether it’s accommodation providers, those who build exhibitions, caterers, cleaners or those offering audio-visual services,” the prime minister said.

Under the program, businesses can claim a grant of half of many of the expenses incurred for both attending a trade show and appearing at one. Costs that the government will cover include air fares, accommodation, registration of delegates, and the cost of building, installing and staffing event booths.

The government will also match event sponsorship spending dollar for dollar, up to a maximum of $10,000.

However, it will not cover the cost of private transport – including what the commission describes as “VIP chauffeur transfers” or attendance at gala dinners and other social functions linked to conferences.

Imarc, which is due to take place in Melbourne in October, has urged potential attendees to apply for grants.

Other fossil fuel-heavy conferences eligible for the grant program include AOG Energy, which focuses on oil and gas, in March, and petroleum conference the South East Asia Australia Offshore and Onshore Conference, which is to be held as part of NT Resources Week in August.

The government has received more than 700 requests from event promoters to be part of the program, and will continue to consider applications until 26 February, or until all the funding has been allocated.

Guardian Australia contacted the office of the minister for trade, tourism and investment, Simon Birmingham, for comment.