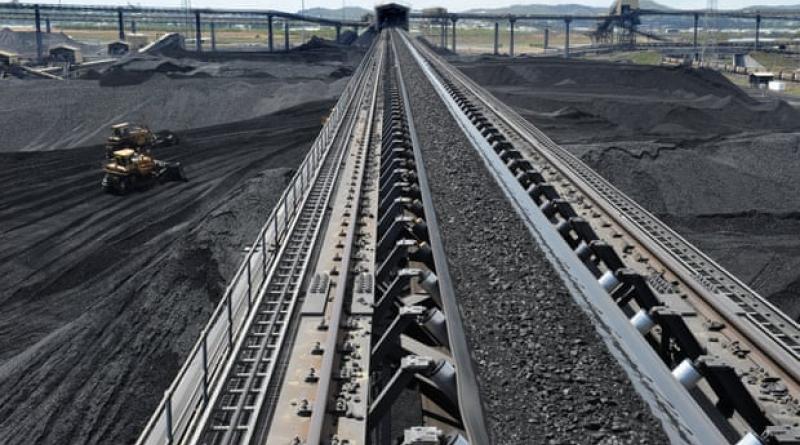 Big emitting companies should be held responsible for the burning of their coal overseas, report says

In the latest report to estimate the role fossil fuel businesses play in driving the climate crisis, researchers from the University of New South Wales calculated the total emissions from the coal and gas produced by Australia’s top carbon companies, from extraction to the resources being burned for energy, mostly overseas.

They found the top six coal producers – BHP Billiton, Glencore, Yancoal, Peabody, Anglo American and Whitehaven – were in 2018 linked to 551m tonnes of carbon dioxide released into the atmosphere. Total emissions from all activity within Australia were 534m tonnes.

When the list was expanded to include Australia’s 10 biggest carbon producers, adding Chevron, Woodside, ExxonMobil and Santos, the combined emissions from their products was found to be 670m tonnes a year, equivalent to that from about 75% of global air traffic. 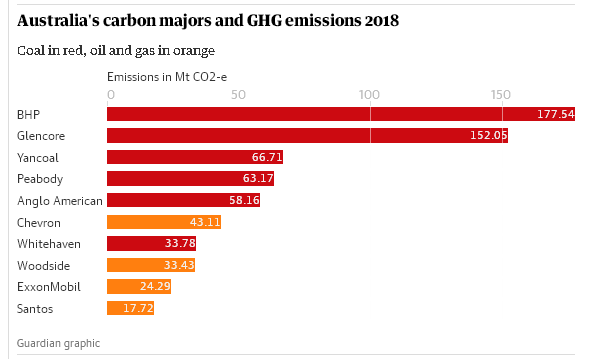 The UNSW report follows the Guardian’s global series The Polluters, which revealed 20 fossil fuel companies including BHP could be directly linked to more than one-third of all greenhouse gas emissions in the modern era. In Australia, it found a wave of planned developments by major fossil fuel companies across the north would significantly increase the amount of coal and gas the country planned to sell into Asia and could push the Paris climate agreement goals further beyond reach.

The report’s lead author, Jeremy Moss from the UNSW Practical Justice Initiative and a professor of political philosophy, said there was a clear case that big emitting companies, which the report calls “carbon majors”, should be held responsible for the consequences of their products.

Global greenhouse accounting emphasises national emissions, rather than those connected to companies. There are no plans for that to change. But there is an increasing focus within companies in reporting and considering how to deal with “scope 3” emissions, including those that are released by a company’s customers when using their products.

BHP’s chief executive, Andrew Mackenzie, acknowledged this in July when,in a speech calling for drastic action to combat the climate crisis, he pledgedUS$400m to develop technologies to cut emissions from not only its own operations, but also the companies that buy its resources. BHP, Rio Tinto and South 32 are among those that report scope 3 emissions.

Moss said fossil fuel companies had a moral responsibility to rapidly phase out their operations in line with the evidence of the Intergovernmental Panel on Climate Change, which found global emissions need to fall 45% below 2010 levels by 2030. He said companies should retire assets, not sell them. 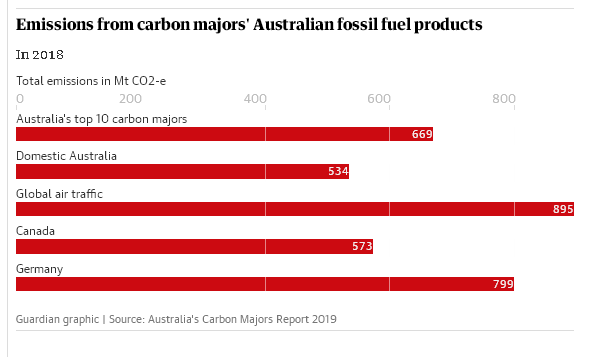 He said their products should be seen through a similar prism to goods that had been banned or had limitations placed on their use on moral grounds, giving the example of Scott Morrison’s announcement that Australia wouldban the export of plastic waste, in part because it was ending up in the ocean. Moss said other industries where there were moral constraints included the live sheep trade, asbestos and uranium.

“The only reason we care about these things is the impact they have. That’s a moral argument,” he said. “There is a reason we sell uranium to France and not Pakistan. It’s because if we know something was to go wrong in Pakistan, a safety issue or a dirty bomb, we’re partly culpable.

“In the same way, to say you’re selling coal to a country just to stop someone worse from doing it, that’s just not true. We use supply-side constraints all the time. We should with fossil fuels.”

Coal companies were asked for their response to the emissions analysis.

Peabody said the company recognised climate change was occurring and that human use of fossil fuels contributed to greenhouse gas emissions. “We also recognise coal is essential to affordable, reliable energy and will continue to play a significant role in the global energy mix for the foreseeable future,” a Peabody spokesperson said, adding that technology would be vital in advancing climate change solutions.

Others, including BHP and Glencore, declined to respond. In his speech in July, Mackenzie said the company would limit its direct emissions to 2017 levels by 2022 and set a target of net zero emissions by 2050, but the companyfaces pressure from shareholders over its membership of lobby groups that promote coal use.

Chevron, listed in the report as the oil and gas company linked to the most pollution, said managing emissions was an integral part of its planning and it had announced goals to reduce emissions intensity (the amount emitted for each dollar earned) from upstream oil and natural gas projects (by 5-10% and 2-5% between 2016 and 2023 respectively).

The UNSW report cites research that global fossil fuel emissions more than doubled between 1988, when the UN’s Intergovernmental Panel on Climate Change was established, and 2016. Emissions were greater from burning fossil fuels in those 28 years than the previous 237.

Moss said big emitters should pay compensation for the harm caused by emissions released since 1990, if not earlier.

He said many of the major producers listed in the report had long histories of pollution and continued to hold vast reserves to be extracted in the future. The researchers give the example of Glencore, which last year reported it had 6,765m tonnes of measured coal resources and 1,565m tonnes of proved marketable reserves. Moss said extracting it all could lead to 15.6bn tonnes of carbon dioxide, about 29 times Australia’s annual emissions.

Why the coal sector is so excited about Australia's move to 'clean' hydrogen.