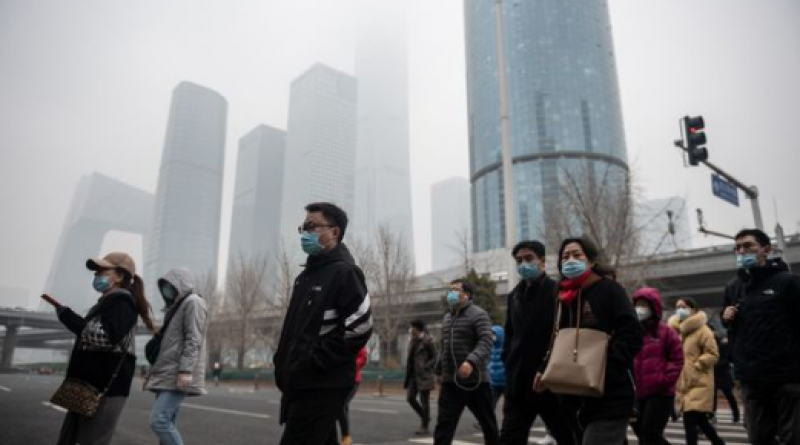 China’s economy roared back from the pandemic on a plume of greenhouse gas emissions, raising questions over how the nation will balance new growth targets with its climate change goals.

Carbon dioxide emissions rose 4% in the second half of 2020, largely as a result of a heavy-industry led recovery that saw steel and cement production surge and a jump in the nation’s consumption of fossil fuels, according to the Centre for Research on Energy and Clean Air, or CREA.

Beijing registered the worst air quality in over a year as its top leaders gathered in the capital for annual legislative meetings this month, prompting the local government to issue an alert for heavy air pollution starting Wednesday.

“It’s an important reminder to China,” said Ma Jun, director at the Institute of Public & Environmental Affairs. “It shows that some regions haven’t really made enough effort to reduce emissions. Energy-intensive, highly polluting projects are still being approved and constructed.”

Efforts to meet a growth target of more than 6% set out last week by Premier Li Keqiang will likely keep an emphasis on polluting industries, at least in the short-term, complicating the task of hitting objectives to reach peak emissions by 2030 and reach carbon neutrality by 2060, said Yan Qin, carbon analyst at Refinitiv Carbon.

“Keeping economic growth and stable employment as a priority in the short term will mean further growth in emissions,” she said. “Higher emissions in 2021 and the next years will lift up the bar for China to achieve an emissions peak before 2030, requiring more strict measures to be implemented later on.” 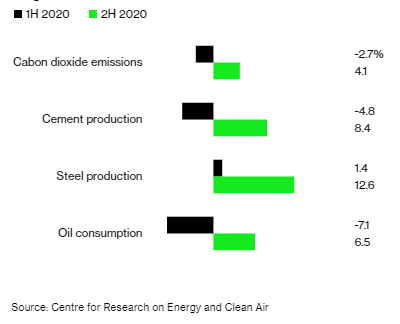 One risk is that local governments or state-owned enterprises could use short-term lenience to usher through carbon-intensive projects, Qin said.

After a contraction in the immediate wake of the coronavirus pandemic, China’s V-shaped recovery made it the only major economy to expand last year. It was also the only top polluter to record higher emissions in 2020 than a year earlier.

In the second half, China’s coal consumption rose about 3.2%, oil demand saw a 6.5% rebound and production of cement and steel increased by 8.4% and 12.6% respectively, according to CREA. Data released last month in the country’s annual statistical communique showed those advances drove full-year increases for the industries.

“What do you do when you’re uncertain about the future? You go to what you know, and coal and heavy emission industries are what they know at the provincial level to kick start growth again,” said Bernice Lee, research director for futures at the London-based Royal Institute of International Affairs.

China’s recovery is setting back plans to reform its economy by prioritizing industry and construction over consumption and services, said CREA’s lead analyst Lauri Myllyvirta. Money has flowed to new fossil fuel projects despite President Xi Jinping’s call for a global green recovery, he said.

Climate plans announced last week in China’s 14th five-year plan were also seen as underwhelming. The proposals didn’t set a hard target for cutting emissions, and there was no move to bring forward from 2030 the date China expects them to peak.

“It’s essential to redirect investments into green energy, transport and infrastructure, instead of building more fossil capacity,” Myllyvirta said. “It’s also crucial to change the economic structure in a cleaner direction, with less reliance on the most polluting smokestack industries.”

— With assistance by David Stringer, and Karoline Kan