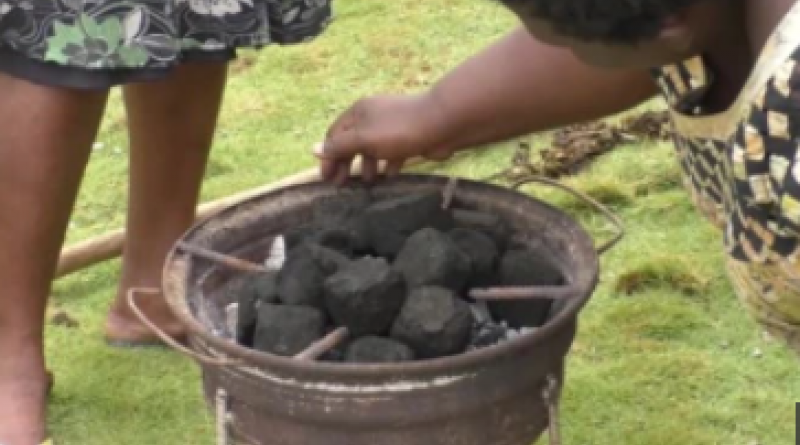 Cameroon's largest lake, Lake Ossa, has been invaded by Salvinia molesta, an aquatic fern native to Brazil that hinders navigation, makes fishing impossible and blocks water access. To combat the spreading plant, a local aid group is training fishermen to harvest the fern and transform it into organic coal.

Florent Tsanga and other fishermen meet twice a week to remove what they can.

Since Salvinia molesta invaded Cameroon’s largest lake in 2016, Tsanga’s life has changed for the worse.

He said his children do not go to school because of the salvinia. When the lake was good, in the '80s and '90s, he said, the children went to school. But these days, he can't afford it.

Lake Ossa is a wildlife reserve that's home to freshwater turtles, crocodiles, manatees and more than 18 species of fish.

A local aid group has trained community fishermen to transform the salvinia into organic coal.

After the fern is collected, it is dried and burned. The resulting powder is mixed with other substances and then passed through a mold to create charcoal pieces for domestic use.

Because the aquatic plant grows back every seven days, the aid group is also experimenting with a biological solution — raising a weevil that will feed specifically on salvinia. The group has released the weevil in a pilot site in the lake.

They hope the insect will multiply, feed on the salvinia leaves, and produce larva that will attach to new plant growth.

“And birth is where the new leaves are coming out, and at that level, you have proteins that the plant uses to grow,” explained Aristide Kamla, founder of African Marine Mammal Conservation Organization. “The larva will hijack those proteins and therefore will stop the growth of the plant. So, not only the weevil will stop the growth of the plants, but it will also destroy the biomass already present.”

The Cameroon government has agreed to a pilot test of this biological solution but has not discounted other methods, said Sylvain Hector Ebog, the conservator of the Lake Ossa Wildlife Reserve.

“We would like to see the mechanical method applied as well as the biological control,” Ebog said, adding that biological control might take much longer. “We can apply both methods. We are looking for funding.”

While the fishermen in Lake Ossa are willing to sell the salvinia charcoal to make some money, they said they would rather see a solution to clean up the lake so that they can resume fishing.